Isentia Index: GST carve up in the air as Hockey calls for change

State politics have taken a national bent, with WA fighting to keep its GST revenue.

It was all about the Treasurers over the past seven days, with Federal Treasurer Joe Hockey coming close to knocking Prime Minister Tony Abbott out of top spot as debate over the division of GST revenue between the states dominated political discussion. Western Australia Treasurer Mike Nahan was the other star of the show, slamming the funding formula that will see WA only receive 30 cents in every dollar of GST raised in that state, just as iron ore prices collapse.

Nahan and WA Premier Colin Barnett received sympathy from Joe Hockey, which immediately sent a number of other state treasurers and premiers into a tizz. PM Tony Abbott was quick to hose it all down by pulling the federal government entirely out of the debate, saying the states would have to sort it out for themselves.

Defence Minister Kevin Andrews was the main mover apart from the treasurers, getting in trouble for not remembering the name of the Islamic State leader, or if you prefer, choosing not to name him for “operational reasons”, as more Australian forces head to Baghdad to support Iraqi troops fighting the terrorist group. Agriculture Minister Barnaby Joyce made a rare appearance in the top ten as he defended halal processing and shearing from critics at both ends of the political spectrum. 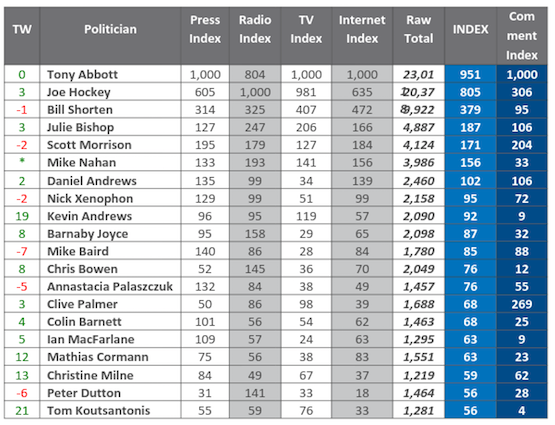 Former PUP colleagues Clive Palmer and Jacqui Lambie remain a favourite topic of talkback callers, with some admirers and many detractors.

Social numbers for the PM remain far below the average from earlier in the year, while the treasurer makes up for some of that with a strong showing in a quiet week.

Yes, yes, I know she’s a politician — but politicians in the US are at least 50% entertainers, aren’t they? Clinton will probably be the most experienced and least charismatic of all the contenders for President in 2016. Will that be enough?

iSentia index: Victorian Parliament stumbles on while Abbott stays in the limelight