The government faces fights on multiple fronts on tax and the budget, but doesn't appear to have coordinated its tactics. 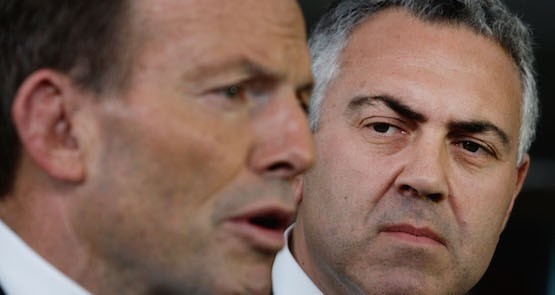 The Coalition now faces fiscal conflict on three fronts, and they’re going about as well as you’d expect from this government.

First there’s the enemy within, sabotaging and blowing up whatever he can. There’s no need for a Resistance moniker or a secret identity — he’s happy to do it in the open in broad daylight. Peter Costello, one-time treasurer, these days highly paid public servant, is savaging the current government for not concentrating on cutting tax, with all the fury of a bloke who knows he could have been prime minister except first he lacked the ticker, then he lacked the patience.

Costello’s attack, and the current government’s response to it, lays bare the lie of the Liberals’ claim to be the party of small government. Costello was not merely, as both Paul Keating and John Hewson have noted, a lazy treasurer, but Australia’s highest-taxing treasurer of the modern era, and not just during the first stage of the mining boom. Four times, Costello sucked 24% or more of GDP from the economy through taxation. His final budget saw him take 23.6% of GDP in tax. The highest Wayne Swan ever managed was 21.7% of GDP. According to the Mid Year Economic and Fiscal Outlook in December, Joe Hockey is currently forecasting he’ll collect 22% this year; the highest Hockey estimates he’ll take currently is 23.1% — far in the future, in 2017-18.

Measured as a proportion of GDP, recent decades tell us Labor is the party of lower taxes, not the Coalition, although you can partly blame the timing of the 1990s recession and the GFC, rather than suggest low taxes are in Labor’s DNA. 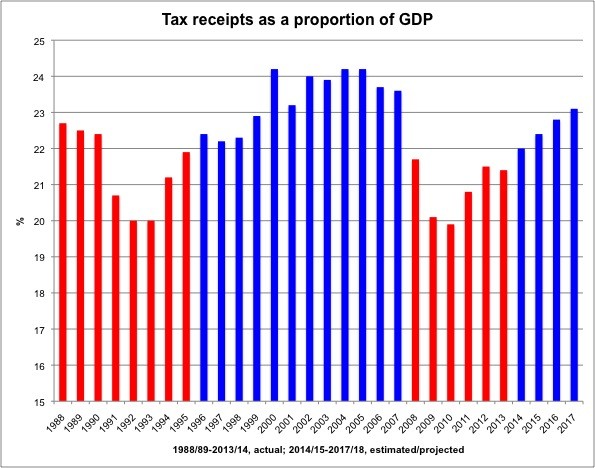 As a consequence, Hockey’s (correct) response to Costello was an echo of the defence employed by then-finance minister Penny Wong and Swan when in government — that if only they were taxing Australia at the same level Costello did, there’d be no fiscal problem. It’s pretty rich for Costello to be attacking his successors for not being sufficiently focused on lowering tax when even on their best projections they’re not going to come within cooee of the level of tax he imposed.

While Costello, helped by some fiscal purists within the Liberals, is dynamiting bridges and derailing trains behind the government lines, the government has a border skirmish, with the fractious far-flung province of Western Australia complaining that, after decades in which it was subsidised by the rest of the country, suddenly it is unhappy enough with federal funding distribution arrangements to again start muttering about not co-operating with the rest of us. Despite the fact that the WA Liberals have done little to burnish the Coalition’s brand as economic managers — the Barnett government has gone into deficit, has already lost its triple-A credit rating and is now looking at another downgrade — Hockey and WA ministers want to arm the separatists in their clash with the eastern states, ideally with money that is currently going to the east, but maybe with some they can scrounge up by taxing online transactions.

But the Prime Minister — who has been caught before saying one thing in Perth about the GST and then another thing the following day in Hobart — figures there’s not much point getting involved in that fight, preferring to conserve what little political ammunition he has left. As far as the GST fight goes, he’s happy to play Switzerland while the states and territories slug it out, and if that means the WA Liberals lose out, so be it. It’s the lower-risk strategy for the moment, but if the fight blows up into a bigger conflict, it will augur badly for the Commonwealth — no one wants to go back to the awful days of premier’s conferences, when state and territory leaders would annually troop to Canberra for a thoroughly demeaning brawl over funding. And at some point, one of the decisions that started all this — Abbott and Hockey’s huge cuts to health and education funding to the states in coming years — might still end up inflicting the sort of political damage caused by other, now-abandoned policies like the GP co-payment.

Abbott is more concerned about the third fiscal battle, which is the most difficult of all: his own budget. And the reason it’s so difficult is because the Coalition’s enemy isn’t so much Labor, or the Senate, or the states, or truculent former Liberal treasurers, but itself. Abbott and Hockey are up against the fiscal expectations they themselves created in opposition and have continued even in government (e.g. Abbott’s bizarre analogy of the fire that starts coming under control as soon as the fire brigade shows up, whether they actually do anything or not). The only real problem with the budget, Abbott and Hockey insisted, was the presence of Labor in government; once that core problem was remedied, the Coalition’s discipline and the surge in confidence that would lift the economy would soon return the budget to surplus.

Instead, the deficit has dramatically worsened as falling commodity prices and consumer and business gloom hammer growth and revenue. And in that context, last year’s budget — the single greatest policy and political stuff-up of recent decades — was crucial in undermining the economy and short-circuiting the growth surge that had commenced after the election.

And if it were not bad enough fighting their own ghosts, Abbott and Hockey themselves are regularly at odds, Abbott insisting the budget will be fine and nothing for households to worry about, Hockey insisting he’s going to carry on trying to find the savings he wanted to get last year. Apparently it’s impossible for anyone to walk around the corner from the PMO to the Treasurer’s office to co-ordinate the government’s tactics in this fight, unless it’s a kind of staggeringly inept version of good-cop-bad-cop, in which each one tells the suspect to ignore what the other one said because they don’t know what they’re talking about.

Abbott will today — we know via the tiresome tactic by which speeches are heavily previewed for select journalists the day before — try to somehow square the circle on all that by explaining that the budget will be good for households and business, but also that everything will be fully paid for — though how, well, we’ll find out soon enough. How this magic pudding fits with Hockey’s explanation that the budget will be mildly contractionary and revenue is continuing to crash (remember the line in the sand on all that?) is anyone’s guess.

The friendly fire casualties look likely to pile up for some time to come.

What is the point of the Abbott government?

When the PM is seemingly trying his hardest to be loved and respected, he withdraws from the GST debate. Why could this be? This is not purely a state issue, but a federalist issue. We all know (as does Abbott) that the states will agree on nothing (and Abbott so loves a fight) and that this is the proper time to apply his diplomatic and political skills (if he has any) to resolve the matter one way or another. At the moment he is looking like a coward.
But then, maybe he will be the great white knight to achieve a compromise solution at the last minute.

Sang, we’ll just have to wait to see where those IPA voodoo bones fall…?

And in the meantime we are sending more troops to Iraq for what?

My eyes tend to glaze over beyond the 12 times tables & I have a poor comprehension of economic issues. But fortunately that’s no impediment to an understanding of this particular government. They haven’t got a fucking clue & it shows.

Oh, Bernard – this is such a good analogy! “ I could say funny, except that it’s tragically (for the country) true.):
“it’s a kind of staggeringly inept version of good-cop-bad-cop, in which each one tells the suspect to ignore what the other one said because they don’t know what they’re talking about.”