Clive Palmer's showing those crocs who's boss ... who's that fetching man in the altogether? ... plus Ted Cruz supporters for Obama ...

CEO booted, but why? Staff at Hamlin Fistula Ethiopia have been left reeling after CEO Lucy Perry was forced to resign last week with little explanation for the move. Perry wrote in a statement on her Facebook page “my vision for the charity in Australia was bigger than that of the board of directors and I was asked to do things which compromised my integrity” and told Crikey sister site Women’s Agenda that the decision wasn’t mutual. We called the charity today to try to find out more information, and after being referred to a PR company, were told that no further comment would be made apart from the statement on the website. Perry has also been in the media recently after her powerful testimony at the royal commission into child sexual abuse. We’ll be watching this space.

There in black and white. Crikey has long enjoyed publishing pictures of politicians and prominent Australians in their salad days, but we aren’t sure what to say about this one. We are told that it’s a prominent Australian, but can’t confirm who. Can you? We’d love to know your guesses. 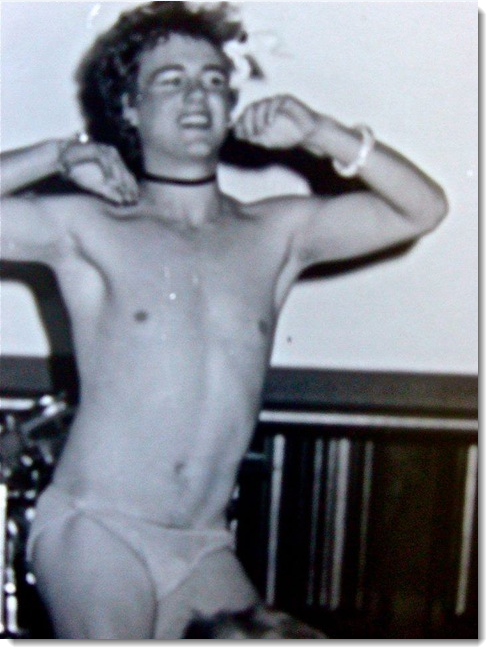 Train station bins. Last year after the national security alert level was raised to high, we documented the disappearance of bins throughout train stations in across the country. They have reappeared in both Melbourne and Sydney, with Melbourne’s looking a bit like a giant sick-bag, and Sydney’s looking like this: 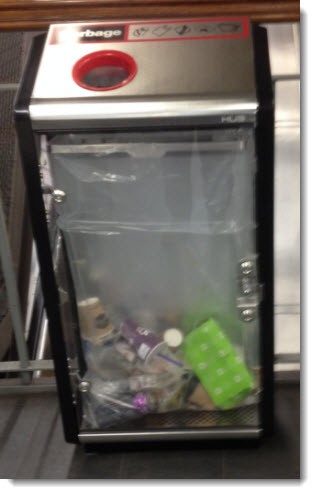 A caller to 2UE yesterday said that Sydney’s new bins cost $6000, but today the station reported that it’s actually less than $2500. In Victoria, bins have been replaced at the major train stations, so we asked Metro Trains how the decision for the new bins was made and how much it cost, and were told by spokesperson Larisa Tait:

“Last year, we removed rubbish bins from a number of stations as a precautionary measure as a result of the heightened national security alert level. We are now progressively reinstalling a different style of bin in the locations we removed them from. The new design is simply a hoop with a bag attached, and in the event of it being necessary to remove the bins again, we will simply remove the bags, rather than the entire device.”

Clive makes menu changes. A man was bitten by a crocodile at a golf course in Port Douglas yesterday, after his golf ball landed near the water, disturbing the 1.2-metre salty.  The golf course is one of many owned by Clive Palmer, and the member for Fairfax tweeted last night that he wished the man, a “speedy recovery”. He then followed it with this tweet: 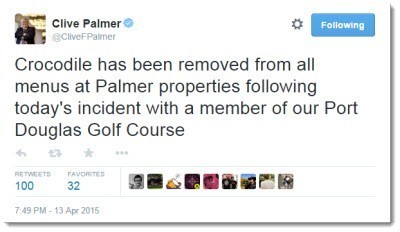 Palmer says that crocodile won’t be on menus at his properties because of the incident, but we’re still not sure about the reasoning behind it. Maybe he thinks if his patrons eat less crocodile they will be attacked less? We don’t think it works like that. We contacted Palmer’s spinner, Andrew Crook, this morning to see if we could make sense of it, but didn’t hear back by deadline.

Speaking of crocodiles … The NT News has been nominated for an award for its excellent croc coverage. It’s not a newspaper award, though, it’s the Australian Book Industry Awards, where the paper is listed as the author of What a Croc!, which has been shortlisted in the Illustrated Book of the Year section. We hope it scares away the competition.

Lefties unite — maybe. The UK election is just a few weeks away, and some shrewd lefties have come up with a plan to try and keep the Tories out, but we’re not sure how successful they will be. The website is called “VoteSwap” and this is what it asks voters to do:

“If you’re a Green in a Labour target seat you can pledge to vote Labour to keep a Tory out. In return a Labour supporter in a seat that Labour is unlikely to win or lose pledges to vote Green, ‘lending’ their vote to a seat where it will make a difference. The national vote share does not change, but the number of Tory MPs goes down.”

In the UK, MPs are elected in a first past the post system, making preferences less influential than they are here, and the site is working on the premise of “anything is better than the Tories”. It is an honour system, though, so you have to trust strangers to keep to their word. We’ll be interested to see if it catches on.

Not what you’re looking for. In a sign that it’s never too early to reserve your own domain name, a tipster pointed out to us what users will find when they go tedcruz.com. The Republican presidential hopeful was beaten to register his own name as a domain, meaning that users are directed to a site that tells them to “support President Obama”. Cruz’s own website is tedcruz.org. 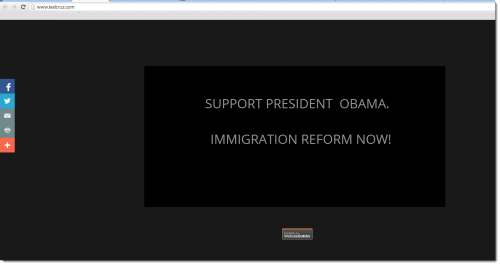 As clever as the squatting on tedcruz.com was, have a look at http://www.jebbushforpresident.com/