Hillary Clinton is an inspiring candidate, and no, she's not just riding on Bill's coattails as Dubya ran on H.W.'s. 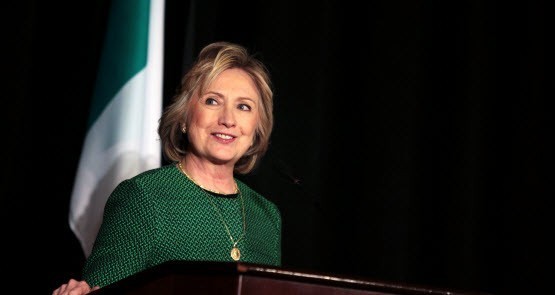 Hillary Hillary Hillary: No sooner has Hillary Clinton announced that she’s been running for the past 12 months and unveiled a logo stolen from a 1980s building society than the contrarian articles have started: well, it ain’t a foregone conclusion, someone could emerge, Americans hate dynasties, etc, etc.

Well, it ain’t a foregone conclusion, and a figure like Rand Paul — raging against racism and the prison gulag, essaying a less worse foreign policy — could regroup a new coalition, etc. But but but — in cranking out contrarian forecasts much has to be ignored: firstly, the fact that the Republican Party is now a machine for creating unelectable candidates, obliging them to say yards of mad stuff about abortion, evolution, same-sex marriage and much else before they get to the nomination — at which point they look like the leader of a cult, not a party.

Secondly, as dispiriting as it is for many to have a Bush-Clinton era stretching half a century across US history, this is a wife running, not a son or daughter. Few doubt that a lot of Bill was Hillary Rodham Clinton, and that she would have gone a long long way had second-wave feminism occurred a decade earlier, or she a decade later. By contrast no one doubts that Dubya would have gone precisely nowhere without the name and the family. The broad swathes of activists who support the Democrats may have to clench their teeth a little harder to campaign this time round, but this is still an obviously inspiring candidacy on its own terms, with a first-class candidate, and it will mobilise a huge base.

Even an H.Clinton- Jeb Bush battle has a greater degree of legitimacy on the side of Clinton, by virtue of the spouse-child distinction. With her southern background, all going well, Hillary’s good for 35-40 states. This could be a nightmare for the Republicans.

What does it say about the US political system that since 1980 two families apart from the Obama interregnum will be the vice president, president, or presidential candidate up to 2020. From a population of 300 million plus this is the best they can muster?

Incidentally, La Clinton is from Illinois, in the days when she was a Republican. She only went to Arkansas because of Bill, and never liked it. Hardly a “southern background”.

Could they really elect anyone named Jeb?

They elected someone named Barrack, so I suspect Jeb won’t be too much of a challenge. It’s not Australia were they only get John, Kevin, Julia and Tony.

mikeb: Jeb is an acronym for John Ellis Bush, so yes, but no.