Those who dismissed last Friday's protest against the closure of remote Aboriginal communities as selfish completely miss the point. 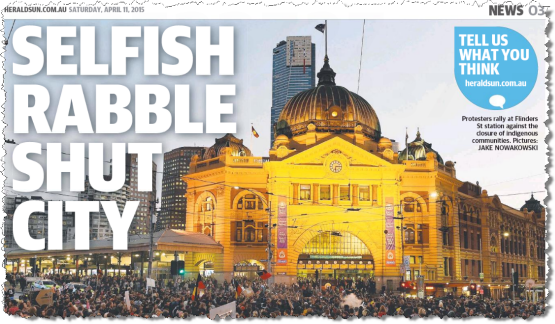 Je suis selfish rabble, then. And if you’re not selfish rabble too, you need to provide a damn good reason — much better than Dr Kerryn Phelps’ self-congratulatory response to yesterday’s Crikey article. The “selfish” rally that disrupted Melbourne transport in protest against the closure of Aboriginal communities in Western Australia came less than a week after the clashes between anti-racism protesters and Reclaim Australia supporters in Federation Square. In the wake of these two events, there has been much discussion about what form anti-racist protests ought to take.

I went to Federation Square on Easter Saturday in order to cover the event for Crikey, rather than as a participant in the demonstration against Reclaim Australia, but of course, given my Muslim identity, I can’t pretend to have been an unbiased observer. All the same, I listened to what the Reclaim supporters had to say and answered their questions (however aggressively they were framed). Last Friday, on the other hand, I was unequivocally and unashamedly a member of the “selfish rabble” whose protest against the closure of Aboriginal communities disrupted peak-hour transport. This was an assertive but non-violent protest — and yet media coverage has overwhelmingly been characterised by varying degrees of hostility.

Brad Chilcott’s “Welcome to Australia” camp for refugees and asylum seekers has been described as a more appropriate response to Reclaim’s hatred than the anti-racism protest in Federation Square, but this critique misses the point. Events such as those hosted by “Welcome to Australia” are valuable in their own right but, in and of themselves, they are not an adequate means to address the religious racism epitomised by Reclaim Australia. Chilchott told Martin McKenzie-Murray from The Saturday Paper that “your audience is not the racists you’re shouting at, but the audience at home” — an audience that “couldn’t tell the good guys from the bad”. But statements like this assume a particular type of audience — the traditional middle-Australia of legend.

The hearts and minds that matter belong to decent white folk who might occasionally subscribe to dog-whistle politics but who are basically well-meaning. The hearts and minds of Muslim viewers are presumably robust enough to withstand the sight of a racist hate-fest with them as a target held in a major public location, protected by the police from those who would attempt to disrupt them. In the (almost) decade since the Cronulla riots, a generation of Muslim Australians have come of age watching goodwill events and patient explanations in the face of anti-Muslim racism — and frankly we don’t have much to show for it. Food has always been one of our strongest goodwill assets (let’s forget our differences over a really good curry — or would you prefer falafel?), but now even that is supposedly a means to fund terrorism and impose sharia law. What do we have left?

Aboriginal communities in Western Australia are facing an existential threat. If you were inconvenienced on your way home by the rally on Friday, the question you ought to be asking yourself isn’t “why was my tram been delayed?” — it’s “why wasn’t I on the streets protesting against this outrage?”

Thanks Shakira, good to hear someone say it how it is!