Tony Abbott continues to be deeply unpopular with voters, today's Essential Report shows, but Bill Shorten has failed to capitalise on it.

Abbott’s approval rating has edged up from 31% to 33% since March, but his disapproval rating has also gone up two points to 58%, meaning the Prime Minister has maintained his second-worst level of net approval, -25, from March, second only to the -33 he recorded in February when he faced a leadership spill motion.

But Opposition Leader Bill Shorten has recorded his worst net approval rating, with 33% of voters approving of his performance (down one) and 42% (up three) disapproving. Shorten still leads Abbott as preferred prime minister, 35% to 32%, down from 37%-33% in March. As previously, Abbott performs noticeably worse among women than men, while Shorten has no significant gender differences in his numbers.

After recovering from the absolute nadir that caused much of his backbench to vote to spill his position, the Prime Minister’s negative rating has recovered — but only to the terrible level it reached in the wake of the 2014-15 budget. The numbers suggest Abbott’s repeat-playing of the national security card, which briefly lifted his numbers back to low negatives in September through November, has failed to achieve the same result. In the aftermath of the leadership spill motion, Abbott attacked the Muslim community, demanded Labor pass draconian mass surveillance laws and foreshadowed further crackdowns on free speech. 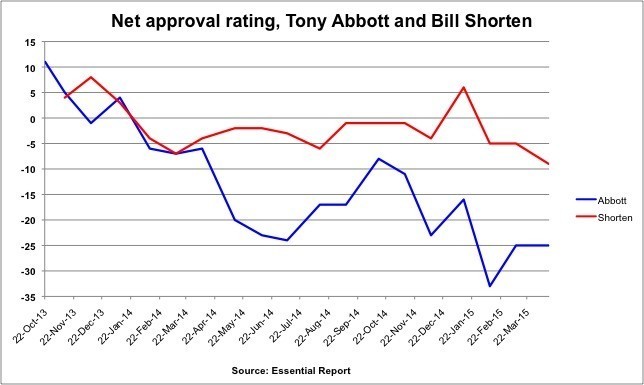 Bill Shorten, however, has been unable to capitalise on Abbott’s poor performance, and after briefly lifting his numbers into positive territory at the start of the year has now slipped to his lowest level as opposition leader, although he has led Abbott as preferred prime minister now for five months.

On voting intention, the Coalition has lifted a point to 41%, while Labor remains on 39% and the Greens on 10%, for a two-party preferred outcome of 52%-48% in Labor’s favour.

However, 27% of voters say the government is “too soft” on asylum seekers, up from 23% in January this year, despite revelations of sexual abuse and child abuse in Australia’s offshore processing centres. The number of Australians saying the government is too tough has fallen from 26% to 22%.

And voters don’t like the idea of politicians who leave their parties staying in Parliament, with 60% saying they should either leave to make way for a candidate selected by a new election (a proposition that would alarm governments, especially in the Senate) or by the parties themselves — although “other” voters are less impressed with the idea of allowing parties to replace them.

This sort of ‘good news’ should help improve the tone in the Crikey Bunker?

Don Chipp, Meg Lees, Peter Slipper, Bob Katter and Craig Thomson (Tony Windsor?)all left their respective Parties and none of them resigned – why is this question being raised now? The practice is an established tradition in the Federal Parliament and has occurred in various State Parliaments – didn’t Peter Cochrane leave the Party that sponsored him to NSW and is happening in Q’ld as we speak?

Our electoral system maintains the polite fiction that people vote for the candidate, not the party. It is individual persons who are elected. If they resign from the party under who’s banner they were elected, or even if they switch parties, it doesn’t matter. They are entitled to sit in the Parliament until they have to face the electors. A membe can only be removed for repeated failure to attend or for gross misconduct, for example a criminal conviction.