Call of the wild: if a jet ski falls in the forest … 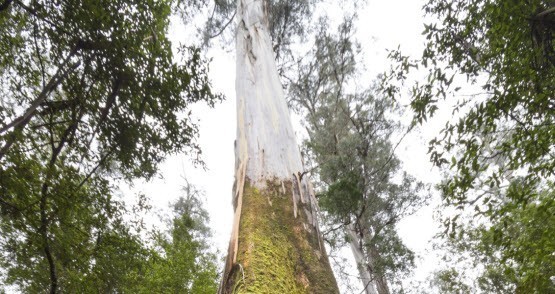 Two years ago Tasmanian headlines were burdened with doom and gloom, but now they are positively buoyant, even self-congratulatory. On the back of MONA and its festivals, as well as the footy, wine and whisky, culinary tours and eco-tourism, visitor numbers have skyrocketed.

Last year, the Liberals won government in Tasmania for the first time in 16 years, and they didn’t take too long to signal their plans to confront issues over what is called “the wilderness” in Tasmania. The Liberal government’s proposal is simply to capitalise on the sudden exoticism of Tasmania by encouraging more businesses to operate in these places that are so appealing to tourists.

Wrangles over the forests are not new and not exclusive to the Liberal Party. As former Labor premier Paul Lennon once stated about Tasmania: “There are lot of fucking trees.”

There is a well-publicised, long-standing disagreement between different camps in Tasmania about how to best manage those resources. The disputes have reached such a level of vitriol that we borrow terms from warfare to describe them: it’s a “battle” that requires a “peace agreement” (promptly scrapped by Premier Will Hodgman upon election last year). Loggers and greenies have irreconcilable differences, and around the country, most people perceive Tasmania as being rent in twain, divided between two camps with a ditch — perhaps a leech-ridden one — in between.

It’s little surprise that the government’s proposal to expand tourism in the reserves, including the World Heritage Area, was greeted with emotional responses, both from those who support and those who oppose the motion.

There are, of course, a number of issues that have been raised with the government’s efforts to increase business in national parks and the World Heritage Area. An obvious one is that many of Tasmania’s ecosystems are fragile — from the hypersensitive cushion plant colonies to incredibly slow-growing conifers like Huon, pencil and King Billy pine. But concerns around the social impact of bringing more people into these remote areas (not to mention helicopters and jet skis) also trouble a number of Tasmanians.

Minister for the Environment Matthew Groom suggested that the term “wilderness” in connection with Tasmania’s World Heritage Area was offensive to Aboriginal Tasmanians, who have managed the land for some thousands of years. Groom hoped for a rebranding: “the Tasmanian Remote Recreation World Heritage Area” appeals to him.

The prospect of mining and logging may be permitted through the current draft management plan and is another matter entirely — possibly an easier one to discuss. And trickier, it isn’t clear what eco-tourism even is or whether we can value ecosystems for more than their economic contributions, as well as what we make of this wriggly word “wilderness”.

That Aboriginal communities have lived in, and changed, some of the now-protected landscapes is without doubt. Likewise, human activity from the last two centuries is evident at countless sites in the World Heritage Area. If wilderness means a place untouched by humanity, then wilderness it’s not.

But for most people who spend time in this part of the island, that’s not what they mean by wilderness. It seems a disingenuous line of argument from the Tasmanian government, an ugly way to sneak through the back door — or come from above in a chopper. There aren’t many bushwalkers or fishermen who can articulate why they crave what they call “wildness”, but they want solitude, or quietness, or simplicity, or even discomfort. Many will say that such experiences aren’t just beneficial because they attract tourists, but because they cultivate health and well-being, reduce feelings of alienation and loss, and provoke unique ways of being and thinking as well.

On the other hand, are these “remote recreationists” just sentimental members of the middle-class? What are these feelings worth in the face of potentially lucrative economic opportunities, in a state where unemployment and lack of education is rife?

Tourism operations are ramifying across the island. Previously industrial towns — like mining hub Queenstown, or Triabunna, whose out-of-action sawmill was controversially purchased by environmentalists — are counting on tourism to continue to grow in Tasmania. On a social level, however, the jury’s out on whether the local populations of these towns are ready to adopt the arts or bushwalking as their lifeblood. But so far, it seems that Tasmanians of all stripes have been ready to embrace what some have called “the MONA effect” — though that’s not a phrase most locals will use.

Largely, I think, this is because tourism operators in Tassie have adopted the local heritage as a part of their business. The successful Queenstown Heritage and Arts Festival is one example; in the same town, tours for mining history and rainforest journeys exist simultaneously. Local perspectives are included and local voices are heard in these tours and projects.

Can operators in the Wilderness World Heritage Area have a similar sensitivity to these concerns? I’d like to think we can. With expressions of interest received — those that have been accepted are now being scrutinised for viability and appropriateness — the reactions from my clients and colleagues is interesting. A large number of the projects are exciting. Unique, low-impact accommodation centred around the new mountain-biking trails in the Blue Tier forest? Bring it on.

But what people seem to be worried about is an overkill of mechanised access into these remote places. Helicopters, jet skis, roads reaching further into the wilderness — they have the capacity to destroy what makes Tasmania such a viable tourism location. They dismantle people’s sense of place, and they show disregard for the heritage of the area.

One proposal involves a helicopter-provisioned lodge being placed at one of central Tasmania’s most remote fishing lakes, one which is already serviced by an old fishing shack, with its own decades-long history that a number of hardy trout-loving folks have scrub-bashed towards in order to make it a site of their own memory and folklore.

For those attracted to remote locations, there aren’t many places left in the world for them. Tasmania is lucky to have these locations, and the longer we preserve such wildness, the more enviable we will be.

It goes beyond sentimentality. As local philosopher Pete Hay points out, there is something strange about being placeless. “The grief, the deep sense of loss experienced by people who are forcibly removed from home, has been well documented,” he says, “Yet modern (and post-modern) existence seems to opt voluntarily for just such a pathological condition.”

I am neither young nor rich. Definitely not a hipster. Don’t drink latte but I do like a beer. I also value the wilderness as a place to go where the intrusions of modern living are rare. Am I being selfish in wanting to enjoy quietness when someone else wants to chopper in and enjoy a fresh cappuccino? Well maybe – but look at it this way. How many places in the world are true havens from noise and industry? Very bloody few. If Tassie can retain those places then we have a very rare commodity. There are squillions of places that are developed and have everything a tourist would want. Just leave the “wilderness” as it is – a place to reflect, and to wonder at the beauty of it all.

Bert Spinks, in light of past efforts of mainlander yuppies to over-ride the wishes of those living in the Apple Isle, many Tasmanians aren’t enthusiastic about any sort of input from outsiders.

If this is to be the decision, to leave large areas of Tasmania as wilderness, then the follow-on costs need to be transparent.

We need a statement on our tax return stating exactly how much we are subsidizing an underdeveloped Tasmania, though welfare payments to locals, to the amount of free infrastructure the tiny amount of “hardcore” wilderness tourists utilize.

We shouldn’t hide from the fact that if we stand against traditional heavy industry (forestry, mining), while at the same time prevent the development of tourism enabling services and infrastructure, there and not many job opportunities left for the locals.

Therefore it is only reasonable that mainlanders are made fully aware of the cost impost on Tasmanian and pay accordingly.

Encourage young people to walk the Taz heritage areas, as a once in a lifetime experience. The wilderness is not a consumable, but a treasure. Why is the wilderness not as protected as the Vatican, Buckingham Palace, the White House and many more such places? Exclude vehicles and development. Limit repeat visits. We cannot all go to every place in the world, whenever we want.