Australian films will take an even larger slice of the market share at the domestic box office this year. Here's why ... 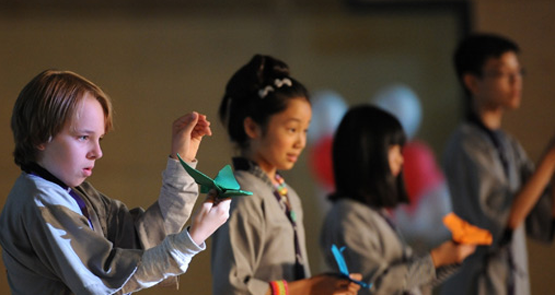 Some good old-fashioned Hollywood star power gave Australian cinema a whopping start to the box office in 2015. Russell Crowe rode into town (and out of town, on a horse in Turkey) in his glossy globetrotting war drama The Water Diviner, which opened on Boxing Day last year and took a total domestic haul of more than $15 million, a chunk of which bulked up January’s ledgers.

The next mega success story was more of a wildcard. Fingers were crossed for director Robert Connolly’s feel-good kids film Paper Planes, about children entering the world of competitive aerodynamic stationery. But nobody predicted it would catch on the way it did. Paper Planes sailed past $10 million — not bad for a bunch of pipsqueaks folding paper.

There have been smaller successes that will nevertheless have on impact on market share. Take, for example, actor-cum-filmmaker Damon Gameau’s documentary That Sugar Film, which opened in March and has grossed more than $1 million domestically. That might not be huge compared to The Water Diviner and Paper Planes but is a very respectable figure — enough, in fact, to make it the third most successful Australian documentary of all time at the Australian box office.

There are plenty of other locally produced films in the pipeline that are likely to make a big splash in cinemas. It is debatable whether Mad Max: Fury Road is an Aussie film, but it will be counted in the tally, and all signs point to a box office behemoth. The country’s most iconic anthropomorphic koala, Blinky Bill, will climb back onto the big screen for a new CGI adventure, after previously foraying into cinemas in 1992 and netting $2 million.

Director Jocelyn Moorhouse will release her adaptation of Rosalie Ham’s bestselling gothic revenge novel The Dressmaker, with Kate Winslet in the starring role. Family film Oddball, a real-life story about a pooch who saves a penguin colony, will attempt to replicate the success of Red Dog. There are others including Strangerland (with Nicole Kidman, Hugo Weaving and Joseph Fiennes) and The Daughter (with Geoffrey Rush and Miranda Otto).

Given how obsessed Australian media is with doom and gloom stories about the fortunes of homegrown cinema, offering a prediction of commercial glory for our little industry that could would likely be laughed out of the room. But hell, here’s one anyway: I propose that 2015 will be a great year for Australian films at the Australian box office.

Allow me to couple that with a different message: that I don’t really care and neither should you. Or at least, that we should stop becoming so obsessed with box office bean counting as the primary metric by which we define success or failure.

Box office figures will fluctuate year on year and bums on seats will come and go. If I’m right, and 2015 generates the largest market share for Australian cinema in years, you can count on 2016 being a different story. I can almost already see headlines proclaiming the good days are over and a new slump has kicked in. Somebody will ask, as sure as light is day and dark is night, if the success of 2015 will ever be repeated.

Maybe and maybe not. But one thing will remain rock solid while numbers go up and down: the existence of a huge pool of incredibly talented Australian filmmakers. Their work might not reap lucrative commercial dividends or figures comparable to American content but the flow-on effects will be many and various. And it these effects that have become grossly under-valued amid the unrelenting focus on ticket sales.

Take, for example, 1989 drama Sweetie, a touching film about a dysfunctional family. It ends in tragedy. The critics loved it but box office intake was small: just $367,000, which wouldn’t have been enough to recoup its costs. Most pundits these days (and probably several back then) would lump the film in a big basket stamped with the word FAILURE and ask their readers to share the doom and gloom.

But hang on a second. Sweetie launched the cinematic career of Australia-based filmmaker Jane Campion, who went on to become the second of four women ever nominated for an Academy Award for Best Director and the first female filmmaker in history to receive Cannes’ prestigious Palme d’Or award. The creator of TV’s Top of the Lake and a plethora of acclaimed films is one of the most respected storytellers in the business. If the conversation has to ultimately shift to dollars and cents, there’s this: one of Campion’s subsequent films, Australia/New Zealand co-production The Piano, cost $7 million and earned around $140 million from the international box office. Does investing in Sweetie still seem like such a bad idea?

Last year, one of several feature films that failed to connect with cinema audiences in Australia was These Final Hours, the apocalyptic debut feature of Perth-born writer/director Zak Hilditch. Perhaps the film’s grim setting (it’s based during the final hours on earth, which in Hilditch’s mind would be marked with extreme violence and carnage) made it a tough sell for cinema-goers. Or perhaps bad luck played a part.

Either way, the figures were disappointing. Despite a wide release and a good marketing campaign These Final Hours (which cost around $2.5 million to produce) grossed just $207,000 in its first four days and quickly disappeared from screens.

In the wake of what appeared to be a smouldering financial ruin, The Sydney Morning Herald asked “Is there any hope for Australian films at the cinema?”. It wasn’t alone: last year, pretty much every major news outlet posed that question in one iteration or another.

But let’s take another look at These Final Hours. Prior to its release, the film was the talk of the town on the festival circuit, which generated an enormous amount of positive word of mouth. The $5000 Hilditch received from The Age‘s Melbourne Film Festival award would have been nice, but nothing compared to being programmed in the Directors Fortnight at Cannes. This is no small honour. Since its inception in 1969, the ultra-selective program has showcased the debut films of many luminaries. These are names such as Martin Scorsese, Francis Ford Coppola, Michael Haneke, George Lucas, Spike Lee, Robert Bresson, Jim Jarmusch, William Friedkin and Werner Herzog.

The challenging aesthetic of These Final Hours further developed the skill set of rising cinematographer Bonnie Elliott. The set was a temporary stomping ground for rising star Sarah Snook, who went on to be cast in Oscar-winning director Danny Boyle’s upcoming biopic of Steve Jobs (written by Aaron Sorkin) alongside Michael Fassbender, Jeff Daniels, Kate Winslet and Seth Rogen.

In late March, it was announced that the US TV division of the legendary Luc Besson’s company EuropaCorp had bought the rights to These Final Hours. They have signed Hilditch on to write, direct and produce a remake for American cable television. And if you’re still wondering about commercial return on investment for a taxpayer-subsidized film (and you really shouldn’t be) international sales for These Final Hours have been so strong that it is well and truly on track to becoming profitable.

So rather than fretting about whether there is any hope left for Australian films, perhaps we should be asking a different question: when are we going to stop pretending that box office performance is the most important metric to define success?