One of these things not like the other. How times change. Queensland MP George Christensen was one of the most vocal government MPs to advocate for repealing section 18C of the Racial Discrimination Act last year, telling the party room “freedom of speech is a God-given right — if we don’t allow the things we don’t want to hear, we don’t really believe in free speech at all”. But it seems freedom of speech isn’t a God-given right for those socialist atheists who burnt the Australian flag last Sunday at demonstrations against the Reclaim Australia movement. In his blog last week, Christensen said:

“Many people were surprised it is not against the law to burn the Australian flag in such a manner and they feel offended and threatened when they see these actions taking place in Australia and broadcast on the news.

“I have asked the Racial Discrimination Commissioner to investigate the protests to see if they are unlawful under Section 18C of the Racial Discrimination Act. According to the Act, it is unlawful to perform any action in public that is likely to offend people of a particular race, religion, or national background. If sections of the Act can be applied to one race or nationality it must apply to all, whether a minority or the majority.”

Could Reclaim Australia be reported to the Human Rights Commission under the same reasoning though? Not according to Christensen, who labels the group’s crusade against Islam “legitimate concerns”:

“These were legitimate concerns that were not targeting individuals or a specific religion. Islam is an ideology that has more to do with politics than any religion and certainly has nothing to do with race, but professional protesters have tried to make it about race and engaged in extremely racist and intolerant actions.”

With such bulletproof logic as this, it’s no wonder he thinks that Vegemite is funding terrorism.

WestConnexing Clover and Greens? The controversy over the preference deal between the NSW Greens and independent MP Alex Greenwich isn’t over, with a tipster telling us that Sydney lord mayor Clover Moore organised the WestConnex forum only after the deal had been made. The Greens candidate for Sydney expressed his disappointment at the party’s deal with Greenwich, which led to fellow Greens candidates appearing at community events with his competitor during the campaign. The influence Moore’s profile and support for Greenwich has on voters has already been documented, but according to our source, the forum was a way to also raise the profile of Greens candidate Jenny Leong. Moore also appeared on Leong’s election material, putting them on the same page against the road development. We asked Moore’s office if the forum has been organised as part of a deal to show support, and a spokesperson told us: “There is no substance to this rumour. All major political parties were invited to speak at the WestConnex public meeting. The ALP and Greens accepted the invitation”.

Renewable jobs decline. How many jobs are at risk from the government’s war on the Renewable Energy Target? Well now we know: the ABS this morning released its first data on the size of the renewable energy sector, which in 2013-14 employed 12,590 people, down from a peak of 14,890 in 2011-12 (for comparison, coal mining currently employs 43,000, down from 60,000 in 2011-12). With the Coalition keen to dump the RET and encourage coal, the downward trend in the renewable sector isn’t likely to be reversed any time soon. Easily the biggest sub-sector is rooftop solar, which employed 6120 people, although that’s down from nearly 11,000 in 2011-12. The other key sector, wind — much hated by the Coalition, which appears to be riddled with wind turbine syndrome believers — has been growing strongly, and now employs nearly 2700 people, all of whom apparently bravely soldier on in spite of the more than-150 symptoms of wind turbine syndrome claimed by the likes of The Australian.

Safety first. A tipster tells us that Prime Minister Tony Abbott is seen as a fashion icon in her workplace. Not for his blue ties, or his speed-dealer sunnies, but for safety goggles. He wears them so well, we’re sure the whole office is rushing out to follow suit. 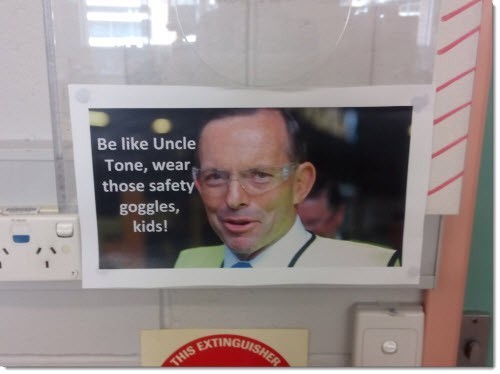 Routine liquidation. A tipster was surprised to come cross a liquidation notice for one Redfern Now Pty Ltd last week. Redfern Now, of course, is the name of one of the most widely lauded telemovies to air in recent months, and follows a highly successful series of the same name.

So why is the company responsible going into liquidation? Ms Tips called up the administrator, who assured us it was nothing out of the ordinary — apparently it happens often when local Australian productions come to an end. “It’s a pretty normal process,” Gary Williams from Rosenfeld Kant & Co said. Australian films are often funded through the help Screen Australia, partly through a tax refund. That refund isn’t granted to production companies until the end of the financial year, unless they go into liquidation first. “It’s a fairly normal process for film companies … it’s what has to happen for the tax office to give the refund a green light before the end of the financial year.” Redfern Now is finished, has been screened, and has now moved onto the next phase — which is for all those who’ve put money into it to get their money back.

Calling subeditors. As further evidence that subbing at Fairfax is still on struggle street, a tipster pointed out these howlers from Saturday’s paper to us. A caption in the Business section read “Generic caption in here” and a review of a Tesla was published twice in the Drive section. It’s no “World is fukt” but it’s still a worrying sign. 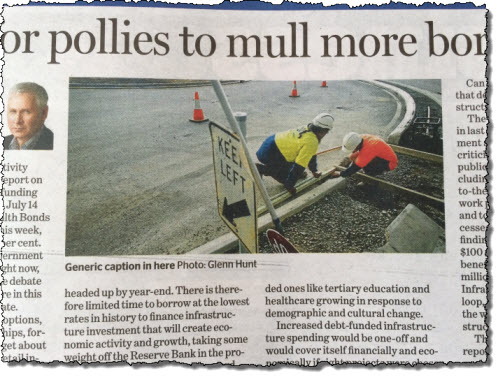 The Hillary Code. Since Hillary Clinton announcement yesterday that she was running to be the Democrats’ presidential nominee for next year’s election, much attention has been paid to her new logo and sleek website. Clinton used social media to tell the world what we already knew, eschewing the big parties held by her Republican counterparts. The logo has garnered a lot of commentary, with some saying it looks like the Fed-Ex logo and others describing it as looking like a WordArt product from the ’90s. Even Team Hillary’s website designers have got on board, putting an ASCII (American Standard Code for Information Interchange) image of the Hillary Campaign logo in the website’s code. You can see it for yourself by clicking here.

George “Sugar Plum Fairy” Christensen?
[Isn’t he the National’s “Mr Whippy” – “journalist”, ex super star-reporter for The Student Advocate, and such similar subsequent “personal bests”?]
If only they made sheets big enough ….?

I wonder what is the cause of the coal job losses, it would not be govt policy like the renewable industries so perhaps it is just going to happen anyway. So why bother worrying about losing those jobs, this govt didn’t with the car industry jobs did they?