Ryan Stokes to head the family business. And other media tidbits of the day.

Disclosure (of sorts) at last. They are a slow moving mob at Fairfax Media, especially when it comes to defending their own position. Last Tuesday, Crikey pointed out the lack of disclosure in a report in the Media section in last Monday’s edition of The Australian. The report was by our old fave, Darren “Lurch” Davidson in a report claiming real estate agents were critical of the new Domain model for real estate agents (News Corp owns 42% of REA Group, the major player in the market). Davidson acknowledged that relationship, but he failed to point out that Sydney real estate agent, John McGrath who was critical of the Domain model, was also a director of REA. Fairfax failed to take any issue with this obvious case of partiality by the Oz until this report appeared on the Fairfax website at the weekend:

“But when asked by Domain, which I work for as a journalist, why he felt it appropriate to put himself forward as a commentator on Domain’s new business model, given his obvious conflict of interest, Mr McGrath conceded it ‘would have been appropriate for the journalist to have put the position of me being [an REA] director in’.

“‘If I felt that I was in a position again — where there was an article of this type — I would probably mention to the journalist that it might be a good idea to ensure the article carries the fact that I’m an REA director,’ he added.”

Of course, it was The Australian‘s responsibility to disclose McGrath’s relationship with REA Group. — Glenn Dyer

Thanks Dad. Kerry Stokes’ main listed company, Seven Group Holdings, has lost a CEO, and gained a replacement, Ryan Stokes … as in, of the Stokes family (surprised?). Seven Group, which is nearly 70% owned by Kerry Stokes, said this morning that CEO Don Voelte had indicated he would retire on August 31 (after the end of the financial year and the delivering of the 2014-15 annual results earlier in that month. — Glenn Dyer

Media boss pay packets. The big bucks certainly flowed for America’s major media executives in 2014. Netflix CEO Reed Hastings’s total compensation rose 43% to $11.1 million last year mainly because of a salary increase and a bigger option award. His option award rose 41% to US$8.1 million. Netflix shares gained 12.8% in 2014, but they are up more than 33% so far in 2015. The company reports first quarter results this week.

But for all that, Hastings was one of the “cheapest” of CEOs — the industry leader (as revealed in Crikey last Tuesday) was Discovery Communications CEO David Zaslav, who received a total of US$156 million in total compensation, even though Discovery shares didn’t do well last year and continue to underperform.

Lionsgate (the movie group that John Malone is eyeing off) CEO, Jon Feltheimer was the best performed, with his total package up 400% (yes, 400%) to US$63.6 million as a big award of share options boosted his total package.

Rupert Murdoch enjoyed a 31% rise in his compensation for co-chairing News Corp and 21st Century. Murdoch received a total of US$37.9 million. Fox president Chase Carey was paid a total of US$28 million for running Fox and keeping it performing. That was a rise of a mere 4%, which doesn’t seem enough.

Australia’s most expensive media CEO in 2014 was Nine Entertainment’s David Gyngell who was paid a total of $19 million in cash, shares and other benefits. — Glenn Dyer

Murdoch moves. Twinned Murdoch clan companies, News Corp and 21st Century Fox are reported to be in advanced talks to move their global headquarters in New York from the long-established midtown location to a new 88-floor building in the new World Trade Centre in Lower Manhattan. According to reports in The New York Times and other US media, the building planned by the Murdoch companies is the fourth and final office tower planned for the WTC site.

If the project moves forward, the Murdoch clan will join a steady roll call of big US media companies that have moved out of midtown and down to the WTC site — companies such as Conde Naste (Vanity Fair, Discovery, New Yorker), The Daily News (on the market), American Media, Time Inc, McGraw-Hill and a number of smaller companies and their suppliers, turning it from a predominantly financial area to a media/technology hub. — Glenn Dyer

Front page of the day. In America, a black man is shot in the back running away from a police officer who asked him to pull over (and subsequently was caught trying to cover up the unprovoked shooting). Time‘s message … 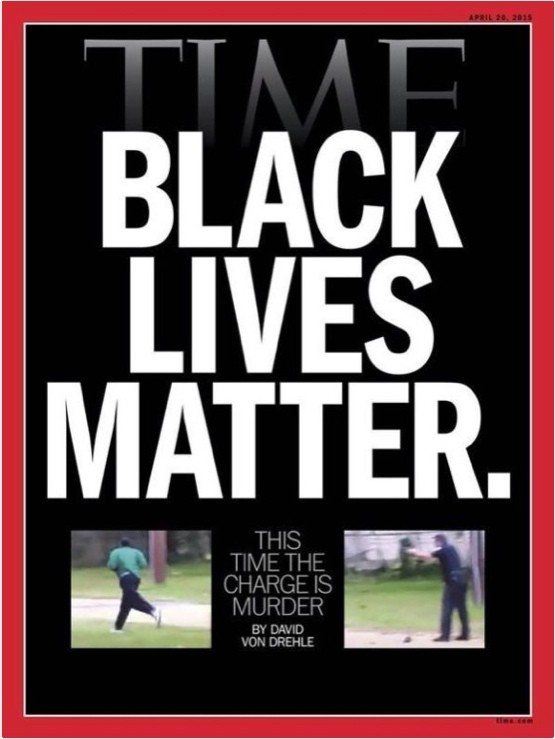 Sorry. I forgot what I was going to say.