The limitations of Twitter were exposed over the weekend as commentators passionately debated the planned closure of WA's remote communities and the CBD rallies opposing the closure. 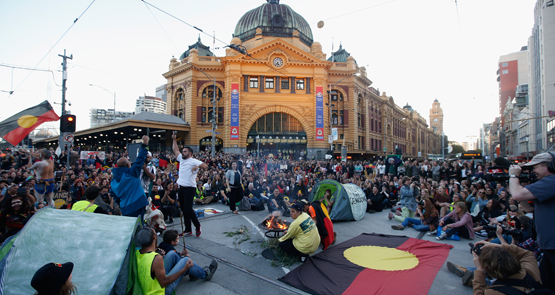 Thousands of everyday Australians came together on Friday, April 10 to express their opposition to the forced closure of remote Aboriginal communities, particularly those in Western Australia.

As the #SOSBLAKAUSTRALIA website states, the campaign aims: “To support the Aboriginal communities in Australia to remain in their homelands and on country & enable them to self-determine their own futures.”

These rallies are publicised and shared across social media, by both indigenous and non-indigenous Australians, and they are not the first rallies, nor will they be the last. May 1 is the next round. There was some backlash against the April 10 rally as some Melburnians felt inconvenienced.

Dr Kerryn Phelps, a well-known non-indigenous Australian and respected figure in the LGBTQI community, chimed in on Twitter the day after the #SOSBLAKAUSTRALIA rally in Melbourne.

Phelps responded on Twitter in a way that I can only describe as reactive and ill thought-out — it happens a lot on Twitter, I’m not immune from it, I’m sure.

As a gay man, I was a little taken aback and then confounded that this comment came from a lesbian who is vocally supportive of both Pride and marriage equality, both of which hold significant marches or rallies every year.

But perhaps what is most troubling is this tweet:

Suddenly people rallying — which, by the way is their democratic right — against the closures of remote Aboriginal communities, a human rights issue, were in Phelps’ mind going to be responsible for any hold-up to emergency proceedings.

Dr Phelps, if you interpret everyday Australians causing a traffic delay as “paralysis”, I’d love to know what word you use to describe the reality of fearing your community, your home, is on the hit list for closure.

The barrage of negativity in social media directed at me over the weekend requires a response. Twitter can be an effective quick communication device but can also, because of the brevity of the posts, create misunderstanding.

I forged a link between the AMA and NACCHO, inviting its chair, Dr Arnold “Puggy” Hunter, to address the AMA National Conference in 2000. Puggy invited me to travel with him to a number of remote communities including Bidyadanga and Beagle Bay in Western Australia. Puggy had struggled with poor health for most of his life and sadly passed away in 2001. His legacy lives on.

In 2001, I set up the first AMA Public Health Report Card on Aboriginal and Torres Strait Islander Health to track progress and help to make state and federal governments accountable for funding and outcomes. That report card continues today.

I was invited to address the ATSIC National Treaty Conference in 2002 to argue for the right to equality of opportunity for health, education and social justice for indigenous people.

One of my tweets, which was conveniently not quoted, said:

At no stage did I say that there was no right to protest. Attacking and alienating a long-term advocate is counter-productive and damaging to the cause.

The following quotes and links are on the record. Although they were delivered over a decade ago, the issues burn on.

“It is critically important that we are able to go beyond the good intentions and rhetoric that has appeared in so many government reports and embrace commitment and action. Such action must be backed by adequate funding and tied to achieving specified outcomes in defined periods of time …

“The aspirations of Aboriginal and Torres Strait Islander peoples can no longer be ignored. It is their right as citizens to have the opportunities that exist for other Australians. The right to equity of opportunity for health, education and social justice is fundamental.”

“I hope that it can only get better from here. Certainly this is as much as anything a consciousness raising exercise and what we’re trying to do is to motivate governments to continue the progress that they are making. We’re pleased to see that there has been progress made in terms of policy direction and in terms of some of the co-ordination, but certainly there is a great deal more that needs to be done and you can’t make that sort of progress without putting adequate levels of funding.

“You really just need to travel a little to some of these remote communities where the need is so great. I mean, these people are asking for things that everyone else just takes for granted, if you live in a less remote location. I mean, things like roads and decent sewerage systems and water systems and educational opportunities for their children, fresh food and water. These are not a big ask but they do, because of remoteness, in many cases, take more money to provide these things.

“There’s also a need for more health workers working in Aboriginal communities and with Aboriginal people and certainly what we need to do is to build on the success of projects like Professor Wendy Hoy’s.”

“Progress in establishing access to the right services and programs must be accelerated. Policy must be translated more quickly into functioning services.

“The funding required, ie the additional $250 million per annum for health services, must be phased in over a clearly specified period of time. Professor Deeble’s estimate of an additional $50 million per year must be implemented in effective prevention and population health programs.

“There must be a National Training Plan that will produce the required numbers of health workers, particularly those from an Aboriginal and Torres Strait Islander background. It is time for action.”

Just another selfish, self entitled not unwealthy upper middle class white cow, who happens to also be gay.

So she supports Marriage quality. So what?? It’s not even supported by not a few gay people who really don’t care for this ongoing embourgeoisement.

I hate to say it but she’s not atypical of a lot of self important, self entitled white people, gay and straight.

Don’t ever think being gay per se makes anyone better or worse than anyone else.

So where’s the action , where’s the stopping of abuse of the women and children in these communities… this was 2015 4 years later you e done nothing ..