The Age's society pages have covered a party thrown by a shoe company -- and exclusively quoted people who work either for the company or for the PR company that put it on ...

Of the eight women the Sunday Age photographed or quoted yesterday in a write-up of a Novo shoes launch party last week, at least five are paid to promote the shoes professionally. Not that readers would know.

The Gatecrasher column, written by Mik Grigg, is a society spread featuring photos and fluffy write-ups of parties and events around Melbourne. Yesterday’s instalment raised eyebrows in PR land for giving copious space to the staff of events and PR company Kate & Co, which organised the launch. “One of the golden rules of public relations is that it’s about the client or product and not the PRs wanting a party lifestyle,” said a source. Your correspondent, meanwhile, couldn’t help but wonder at the ethical problems raised by quoting paid-for corporate spinners as though they’re simply guests enjoying the festivities. 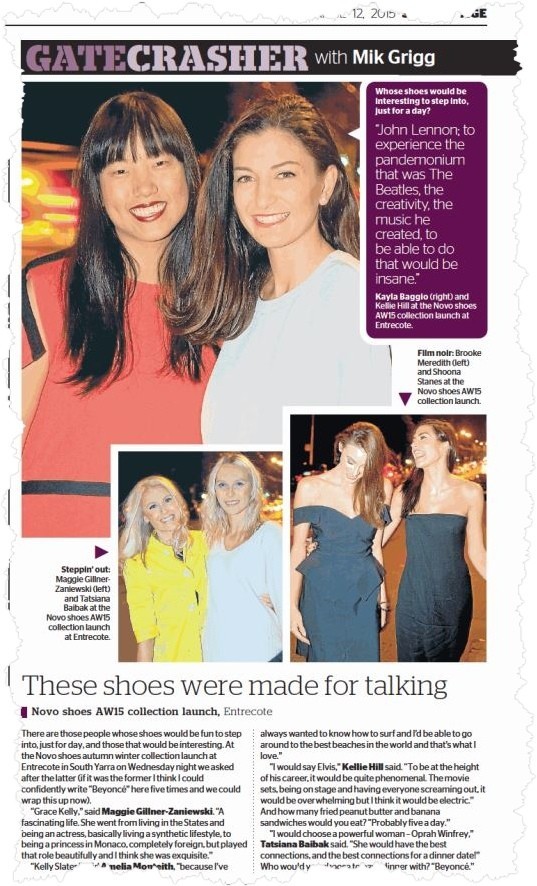 Eight women were quoted or photographed (often both) in the two-page spread in relation to the Novo party. The copy asked guests whose shoe collection they’d most like to see. Of those featured, three — Kayla Baggio, Amelia Monteith and Kellie Hill– work at Kate & Co, according to their LinkedIn and social media profiles, or in Hill’s case, according to her inclusion at the bottom of Kate & Co press releases. Another two — Maggie Gillner-Zaniewski and Tatsiana Baibak — work in PR and marketing for RSH Australia, which owns Novo.

It’s not the style of the column to reveal the occupations and employers of those it interviews, but Crikey can’t help but wonder if it was necessary in this case. Surely readers, at the very least, need to know if five of the people quoted enjoying a Novo party are paid to promote the company paying for it. We asked Grigg about that this morning — she didn’t respond. We also asked  Age editor-in-chief Andrew Holden, but we learned he’s on leave and not checking his emails. We also approached Kate & Co founder Kate Keane for comment, but didn’t hear back.

Ah the irony of PR and newspaper people not getting back to you!

I studiously avoid these pages because they are full of wannabes, PR people and the Melbourne Z list (some are all of the above). Rarely is there anyone over 30 pictured and the whole page is a bore.

As do I in Sydney, SusieQ. It is the same here.

You should have contacted Clementine Ford for a comment. She could easily spin the whole affair into a gender issue.