Crikey gets Malcolm Turnbull to give up tobacco ... Gina Rinehart is not giving to charity thankyouverymuch ... more woe for Clive Palmer

Turnbull quits the cigs. The Liberal Party doesn’t accept donations from tobacco companies, and Communications Minister Malcolm Turnbull reckons smoking is “a bad thing”. But does he invest in tobacco companies anyway? Page 16 of the Register of Members’ Interests lodged in 2014 shows he added slew of investment companies to his declared holdings, including IFPUX, or Independent Franchise Partners US Equity. 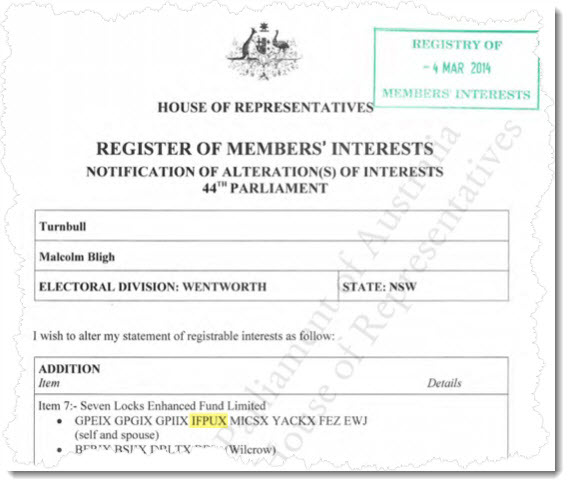 And what does IFPUX invest in? Well, according to Morningstar, its single largest investment is in tobacco company Philip Morris International, where it puts 8.54% of its money. Crikey asked if this was appropriate, and Turnbull’s office responded the MP had not been aware of the Philip Morris connection and that he would dispose of the investment now he had been made aware of it. A spokesman said:

“In order to avoid conflicts of interest Malcolm and Lucy Turnbull generally limit their investments to offshore managed funds where they have no control or influence over the investment policy of the fund and for the most part, and in this particular case, they are selected on his and Lucy’s behalf by a U.S. Investment management firm.

“The consequence of investing in managed funds is that the ultimate beneficiary, in this case the Turnbulls, do not have any influence over the investment decisions.

“The Turnbulls had not been advised the fund in question had this substantial investment in Philip Morris and now that they have been made aware of it they have instructed their investment adviser to dispose of it forthwith and repeated their instruction to ensure that in future none of the managed funds in which the Turnbulls invest have such an exposure to tobacco.”

A spokesman also told us that unlike most politicians Turnbull had chosen not to invest through a blind trust, as that gave him a greater level of control and scrutiny over his own investments. If he had invested in a blind trust the individual details of his holdings would not be disclosed to the public.

Gina’s not giving away fortune. Hancock Prospecting has warned the public that not-an-heiress Gina Rinehart is not looking to give away her not-inherited wealth, despite emails that purport to be from Rinehart. A press release from the mining company this week said:

“HPPL has been made aware that there have recently been a number of scam email messages purporting to be from Mrs Rinehart and seeking assistance with the depositing of funds for an alleged charity or humanitarian purposes. The message is not from Mrs Rinehart who is in no way associated with the scam charity or the scam scheme.”

It seems that the scams which were once Nigerian heirs and heiresses have moved on to using a famous Australian heiress. Except that she’s not an heiress, of course. We think the real problem is that people are falling for an email that says Rinehart is giving to charity — we know her views on giving money to poor people already.

Clive’s car prang. Clive Palmer is going through something of a bad patch, after his beloved mechanical dinosaur Jeff burnt down at the start of the month, Glenn Lazarus left the party and now we hear that around the same time Palmer also had a prang in one of his fancy cars. “Clive’s expensive car was rammed from behind at Parliament around the same time his favourite dinosaur burnt down,” our source says. We hear that Palmer also labelled the incident as deliberate instead of an accidental prang. We haven’t heard which of Palmer’s many luxury cars was involved in the bust-up, but we know it won’t stop him getting around.

Poisoned chalice? It was reported earlier this week that Queensland Labor Senator Jan McLucas, who has served 18 years in Parliament, won’t be contesting the next election. We hear from a tipster that the way in which she lost the support of the state’s Labor Left faction has not only left McLucas out of a seat, but a pickle for her replacement on the ticket, Murray Watt, as it was union influence that swung support in his direction.

“Despite the apparent outward calm, Murray Watt’s win over Senator Jan McLucas in the Labor left faction preselection for the 2016 election has been very divisive over regional representation, affirmative action and deep structural tension between Union and rank and file power… The process and outcome has infuriated many in the faction and there will be reverberations for some years.”

Not all men. The male student elected to the role of women’s officer at the Tasmanian University Union resigned yesterday, but he didn’t go quietly, taking aim at his critics. James Ritchie, a member of the Young Liberals, was elected to the role last month and subsequently faced a petition and national media attention calling for him to resign. He says that the resignation isn’t because of the campaign, and lines like this in his resignation letter confirm he really hasn’t got the message:

Reclaim snail mail. What happens when you write about Reclaim Australia? Crikey contributor Shakira Hussein found out this week when she received the following letter at her workplace after writing about the protests here. It doesn’t say who it’s from, but it does tell her “Say NO to genital mutilation and slavery!!! Say No to islam!!!”. People are also using pictures of human rights lawyer Julian Burnside to push their cause: 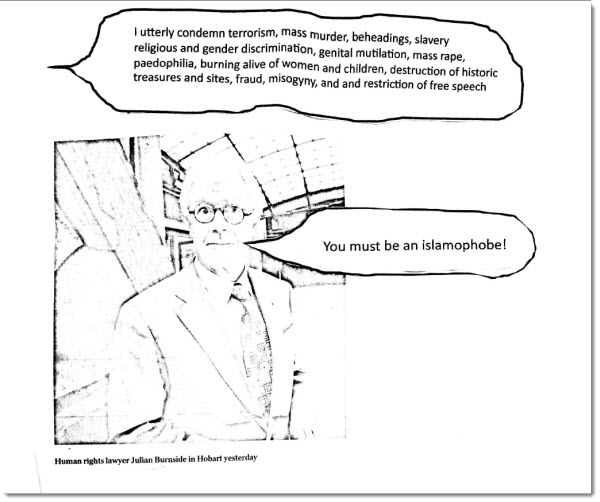 The Power 50: taking care of business

““In order to avoid conflicts of interest Malcolm and Lucy Turnbull generally limit their investments to offshore managed funds.” Is this Crikey speak for avoiding tax?