The lord giveth to Fred Nile, but he taketh away from other CDP candidates

Who will lead the Christians when Fred Nile departs? Possibly no one, if the party's vote keeps sinking. 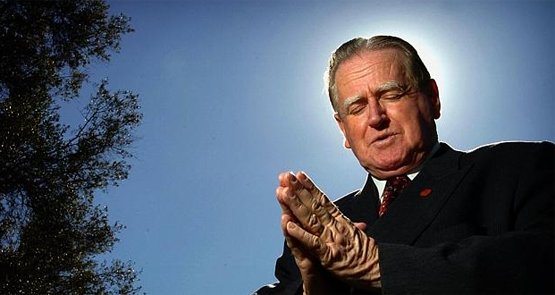 The power of prayer has delivered another eight-year term in the New South Wales upper house to Reverend Fred Nile, leader of the self-styled Christian Democratic Party, but it hasn’t rescued the other two candidates on his ticket.

Before the March 28 election, CDP supporters were given a printed prayer sheet to consult every 24 hours before polling day.

The March 25 entry said: “Pray for the election of Rev Fred Nile, Rev Ross Clifford and Peter Tadros to the Upper House on Saturday, that the CDP would be a powerful balance of prayer and responsibility, bringing words of life and truth into the NSW Parliament.”

“As we live in a Christian democracy, we can actually elect a Christian government, to protect Scripture, Chaplains, Churches, Christian values and laws.

“If CDP could win 47 seats in the NSW Legislative Assembly the Christian Democratic Party would be declared the Government of NSW.”

However, the CDP didn’t win a single lower house seat and lost its $250 nomination deposit in a majority of them, which is only returned if the candidate wins or gains at least 4% of first-preference votes.

Premier Mike Baird will be offering prayers of thanks for Nile’s re-election because it means Coalition legislation to lease 49% of the power distribution network will pass the upper house.

The 80-year-old grandfather of the house may offer some cavilling criticism of the power sell-off, but he won’t block it. A greatly relieved Coalition will be happy to reinstall him as the chamber’s assistant president with a salary of $200,385.

Nevertheless, there is a question mark over Nile’s political future. Originally, he planned to resign from Parliament this year after 34 years, but then decided to restand as No. 1 on the party’s ticket.

A succession strategy appears to be in place. After the Coalition’s election mandate is safely secured, Nile will step down, with his seat already promised to Reverend Ross Clifford, a muscular Christian drenched in the values of pre-Reformation Christianity.

Like Nile, he is opposed to marriage equality and abortion and “No to Sharia law or compulsory Halal”.

“I personally look forward to the day when CDP has Lower House seats, State and Federal, that we have at least doubled our numbers in the NSW Legislative Council and we have a number of senators,” he wrote recently.

However, this is unlikely. The party’s vote is collapsing: whereas Nile once collected a percentage of votes in double figures for the upper house, last month he picked up a miserly 2.54% for his ticket.

With 21 seats in the 42-seat chamber up for grabs, next Wednesday’s final declaration is likely to be: Coalition 9, Labor 7, Greens 2, Shooters and Fishers 1, Christian Democrats 1, and Animal Justice 1.

In private, Opposition Leader Luke Foley will be pleased with the upper house result because the “poles and wires” bill will pass without Labor having to make an agonising decision for or against the measure.

Labor’s Penny Sharpe, who vacated the upper house to contest the new seat of Newtown — where she was convincingly trounced by the Greens’ Jenny Leong — has performed the most ungainly backflip and decided to reclaim the seat she vacated. On the eve of the election, she publicly stated she would not return to Macquarie Street if her lower house bid failed. But hey, what’s new, she’s a “hard Left” Labor politician, and they do what the faction advises them to do.

Sharpe will be shadow planning and environment minister while Jodi McKay, paraded before the election as the shadow cabinet’s “cleanskin” planning spokeswomen, has been given an assortment of odd jobs, comprising justice, police, roads, maritime and freight.

Once again, Labor’s “firm commitment” before the election has been junked after the election without explanation in favour of an approach that is factionally driven.

Foley has choreographed a tough election campaign and the post-election scramble with skill and decorum. His balancing act between desperately competing factional interests has been remarkable to watch. His supporters are hoping he has a safety net just in case.

So whats happened to the hard right of the nsw liberals?? It seems that they were totally shafted by BAIRD?? HMMM