Thailand has instituted an insidious new regime of repression. But you won't hear it mentioned in Canberra ... 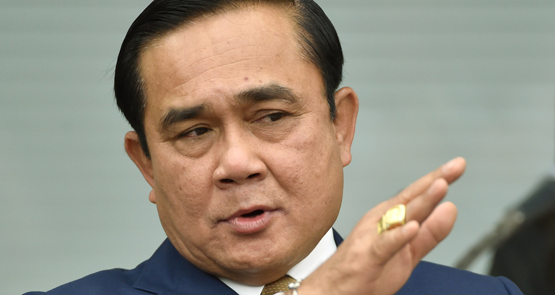 Australia’s silence has been deafening in Bangkok, as the Abbott government has remained resolutely mute when Thailand’s military junta lifted martial law on April 1. It swiftly replaced it with something even more draconian in the shape of section 44 of the interim constitution, which gives the country’s Prime Minister, General Prayuth Chan-ocha, unfettered powers. April Fools!

Prayuth seized power in a bloodless military coup on May 22 last year, later installing himself as Prime Minister. He retired as army chief at 60, as Thailand’s law requires, but he retained his position as chairman of the Orwellian-sounding junta, the National Council for Peace and Order.

Last year, Australia was vocal on the world state in opposition to the coup, but there has not been any criticism of Prayuth’s latest move in his push towards “Democracy Thai Style” (and yes, it is all pretty 1970s). This could be a disconcerting, further signal that those inside the government who value public advocacy of human rights, such as Foreign Minister Julie Bishop, are being muzzled.

The United States, which has been the fiercest critic of its ally in the past 20 months, has damned the latest move.

“It is important that any new security measure ends the practice of trying civilians in military courts, ends detention without charge, and allows individuals to freely exercise fundamental rights, including the rights of freedom of expression and peaceful assembly,” a representative for the US state department said. “We are concerned that moving to a security order … will not accomplish any of these objectives.”

“We would welcome the actual, full restoration of civil liberties in Thailand,” the representative added.

But if the US wanted Australia, its closest ally in the South Pacific, to join in, it would have been disappointed. Not a peep from Bishop, and, when asked for a comment, a Department of Foreign Affairs and Trade spokesperson had only this limp motherhood statement to offer: “As a longstanding friend of Thailand, Australia is following developments there closely. We acknowledge that Thailand faces significant political challenges and that these are for the Thai people to resolve.

“Australia hopes that there will be an inclusive reform process that leads as soon as possible to the election of a civilian government which reflects the will of the Thai people. We continue to encourage Thai authorities to respect human rights and fundamental freedoms, consistent with Thailand’s international commitments.”

Abbott and Bishop seem to have lost their cojones.

The fact is that basic legal rights have been suspended under martial law and that the junta’s record on locking up critics and ramping up censorship is close to appalling.

Prayuth has openly challenged the media, curbing Thai-language outlets and showing uncommon aggression towards reporters, including threatening to punch one journalist in the face. On another occasion, he threatened to “kill” journalists who didn’t “print the truth”.

For sure, the guy has a pretty out-there, black sense of humour, but when it comes down the barrel of a gun, it’s funny notsomuch.

Section 44 gives Prayuth, in his capacity as NCPO boss, unlimited powers of the executive, legislative and judicial branches for “security” and in that hoary old fig leaf “the national interest”. It allows the military to arrest people endangering “national security” and hold them for seven days without a court warrant. It allows authorities to also ban media reports “harmful to the national interest”. Soldiers can raid any location or property, search any vehicle and summon anyone for interrogation, the Bangkok Post noted, adding that  “political gatherings of more than five people are also prohibited”.

And so on and so forth. Any wonder it has been branded the Dictator Law.

“In effect, this means the sweeping away of all checks and balances on the power of the government, rendering the lifting of martial law meaningless,” UN Human Rights High Commissioner Zeid Ra’ad Al Hussein said. Human Rights Watch said the move escalated Thailand’s “descent into dictatorship”.

Living in Bangkok, as I do, it’s best not to say too much more, but please read up online.

It’s not only Thailand that’s getting a free pass from Canberra these days. The early days of the Abbott government calling out Beijing over its unilateral administering of an air defence interrogation zone over the East China Sea and the detention of activists such as Pu Zhiqiang and Xu Zhiyong appear to have passed by. There has been not a peep from Canberra about the five women’s rights activists so shamefully detained ahead of International Women’s Day and arrested yesterday for … distributing pamphlets.

“The detention of women’s activists in #China must end. This is inexcusable,” Hillary Clinton tweeted this week. Even David Cameron has joined the chorus, yet silence from the Australian Tories. Shame, Julie Bishop, shame.

Some attribute the change to the rise of neocon influence in Abbott’s inner circle as the liberal Peta Credlin’s influence wanes on international matters. While no fans of either China or military juntas that are not firmly in the US column (which Thailand is not), neocons hate human rights even more.

The widely acknowledged leader of the neocon cabal in Australia’s foreign affairs and security apparatus, Michael Thawley, snuck back into Canberra with surprisingly little fanfare last November as the latest Secretary of the Department of Prime Minister and Cabinet, the most powerful mandarinate in Canberra.

Thawley was instrumental when ambassador to Washington, during the Dubya years, in taking Australia into Iraq.

If you are Australian, you should be asking: what happened to that freedom-loving Tony Abbott? Perhaps in the understandable but obsessive fight to save the lives of two convicted drug dealers, he has lost sight of fighting for the innocents? Or is Mammon to blame? After starting his premiership with attempted, if often misguided, muscularity in foreign affairs it now seems that it’s trade, trade, trade.

And human rights, from available recent evidence, be damned.

and why do Australians continue to flock to Thailand for holidays?
Hope this article at least provokes a reaction from the Government…..

[ what happened to that freedom-loving Tony Abbott?]
LOL
The man who never was.
Roll on Sept 2016, so an older (and wiser) electorate can boot him from office.

If the Coalition supports the US. on any issue Crikey tells us they’re spineless sycophants. If the Coalition doesn’t support a U.S. decision, Crikey attacks them for NOT backing the U.S. The 12th of Never is a long, long time; but even by then it appears unlikely that while Crikey will probably still be consistent in its prejudices, it’s hardly likely that there’ll be any hope of consistency in the sort of ‘logic’ they favour.

Got to love the irony/hypocrisy of the USA lecturing countries about trying civilians in military courts and holding people in indefinite detention.

I’m sure Tony and Julie are just jealous of what the Thai “government” can push through under the guise of ‘national security’. Not that Labor, going of recent inactions, would do anything but offer bipartisan support if they tried.

@Norm, No Norman nobody will attack the no-alition for not supporting the US, don’t forget they run this country and no party except for the Greens and some independents have refused the “US WAR ON EVERYONE”

The Jewish lobby in Washington are leading that administration around by the nose. They are now trying their very best to push for war in Iran. All this noise from the US administration worried about Iran having the bomb, when you look around exactly who doesn’t have the bomb these days??
Further more why is it that the US is the one who decides who can acquire it given their peace credentials post WW2.
Given the current regime in Thailand I see no difference from it to the US cabal in Washington. Once the US invades a country it is then plundered for all it’s resources and left for broke kinda like Australia at the moment, it is no coincidence that Iran is only one of 3 countries left without a “Central Bank” of course these countries are labelled “the axis of evil” because Washington doesn’t control them.

Some still believe we have democracy, yet now we have permanent spies on all of our data, I don’t even think that is happening in Thailand. If any group in this country stands up against government here and gains some traction they are soon cut off at the knees with some spurious act by either party. After all they both work for the same master don’t they. I would advocate that you post on “Menzies House” where all the rest of the “Rightard” psychopaths preach their brand of ideology. As much as Malcolm Fraser was despised for his actions against Whitlam, he slowly grew and matured into a wise old fella who strongly advocated we cut strings with the US a long time ago. Our politicians Lib/Lab so spineless they realize the hand that puppets them stretches all the way back to Amerika’s central banksters in DC. Norm the US no longer governs for the people of that country only an elite few who think they are the rightful masters of the universe because they eroded financial systems of countries around the world with one of “fractional lending” and most people will see this on the road ahead.