‘A labyrinthine maze of factions’: Greens staffer slams his colleagues in ‘funny’ post 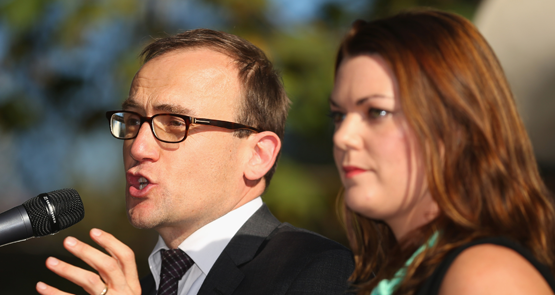 To understand the Greens you must understand all of its state parties, wrote the NSW party’s then-state election campaign co-ordinator Chris Harris soon after the NSW election, in a series of “satirical” blog posts that have inflamed tensions within the party hierarchy.

He describes the NSW branch as “a labyrinthine maze of factions, local groups, and latte swilling inner-city socialists, Bob Brown hating reformed communists. Or something.”

Jokingly referring to the NSW Greens office as a “den of iniquity”, he goes on to skewer each of the party’s very different national branches in a tone that rings more than a little true, including that Victoria has two branches: the Victorian Greens and “the Bandt Greens”, that the federal party room ignores the rest of the party, that the South Australian branch is effectively run out of Sarah Hanson-Young’s office, and that Tasmania is “allegedly a party but more a mates of Bob and Christine organisation”.

The post called “Into the Bearpit”, now hidden from public view, provides a caricature of each of the state branches:

“First, the original and best: The Tasmanians. They don’t care about anything but trees. And Bob Browns with a scattering of Christine Milnes thrown in. The more trees and Bob Browns the better. Those Tasmanians are the Eucalyptus Regnans of the Greens. They have won more seats in Parliament and been in more coalition Governments than you can poke a Hare Clark at. Allegedly a party but more a mates of Bob and Christine organisation. Allegedly they don’t like those green folk in NSW.

“Heading North, the Victorians: The only party in the known history of the universe that counts its successes according to the number of changes to commas and syntax achieved via amendments at national conference. Allegedly a slick nationally focused, centralised machine but in reality it has more factions and personalities than the average Russian Babushka doll.

“And really it is two parties: the Victorian Greens and the Bandt Greens. The main claim to fame of the Bandt Greens is the use of an obnoxious turgid Greens in all its advertising (also adopted by the Newtown Greens which is weird since they are all reds) and weird crescent moon underneath its logo; perhaps a sign of a secret affiliation to Islam.”

And an allusion to the influence of Sarah Hanson Young:

“Heading west: South Australia. Actually not a party at all but an offshoot of a certain parliamentary office. Say no more.

“Western Australia: What can you say about a party that was founded on the absurd pretext of nuclear disarmament? There they are, the West Australian Greens all standing around the bottle, desperately trying to force the genie back in it — and all the while believing they can reform a state the sole objective of which is to mine the entire landmass of west Australia out of existence and ship it to China. I mean who runs a party based on twinkling and a Senator who has hair that is an independent political entity in its own right?

“The ACT Greens AKA The Canberra Teal Party. The only Greens Party in existence that managed to lose a Senate election due to two plainly fallacious assumptions that everyone said were silly but which they ignored anyway (1) that its supporters wouldn’t notice is had changed colour and (2) that if you ignore your entire political base you can still win an election. This is a well known theory of failed electioneering more popularly known as the Labor Party.”

“Queensland Greens: a party with a large cross to bear. Actually the metaphorical equivalent of 100 white crosses borne by people in white gowns and pointy hats. How hard it must be to be a Green in a state where they think Labor are socialists. And where the party thinks similarly and that anything that comes out of the south is a southern trick. Not excluding databases. Rumour has it the entire Queensland Greens membership is written on several hundred paper napkins, with one name on each. That way those southern socialists won’t steal our money or membership!!

“Oh and then there is the NSW Greens: The NSW Greens are the ultimate in democracy; a democratic nirvana driven by the power and independence of their local groups. The local groups are paragons of ‘anti-power’, alternatively known as centralisation. They are the political equivalent of Mecca and must be worshipped at least five times daily each time reciting the ritual prayer: ‘thou shalt not undermine local group autonomy.’

“This allows everyone from NSW to attend any meeting ever known to humankind and never make a single decision on the basis that it ‘must be referred back to the local groups.’ For example the state council may make a unanimous decision (voted on by delegates of local groups) but that decision cannot be implemented until each group has been consulted about the decision just made on its behalf by its delegate(s). And the NSW Greens have no leader, of course. Except the leader you have when you are not having a leader. That’s the unaccountable, un-elected leader that no one can reproach, can never have a fixed term as leader (because s/he is not elected) and has no formal authority. But the local groups like it like that because leadership smacks of centralisation.

“But more on NSW later. You can’t wait can you?

“And there you have it. The Greens. Just like Labor except Green and virtuous. The NSW Greens, just like the Abbott government; no real leader. The SA Greens, a captured bureaucracy. The Tasmanian Greens just like Tibet, all ok as long as god is in charge. The WA Greens, just like Nimbin, another twinkle and it’ll all be ok when the smoke clears. The Victorian Greens. Or perhaps the Victorian’ Greens. [sic] Or the Victorian’s Greens? Depends who is in charge. The ACT Greens, Chameleons for the Senate. And Queensland? Hello, Queensland? Queensland!! The NT? We’re not forgetting you.”

*To read what Harris wrote about his NSW colleagues and the election campaign, click here.

Greens post-mortem: back to 2004, and questions to be answered

Important news must be hard to find when the two first Crikey articles are competing to see which can find the most absurdities in the Green Camp?

Well Crikey, I’m so pleased you have finally seen the light! The Greens aren’t special at all. They are just like any other political party, some good, some bad (although I must admit it is hard to see the ‘good’ in the current LNP).
Just like the other parties, they are full of lawyers who expect the “LAW” to be carried out to the enth degree. Never mind the people and what they want. Doesn’t seem to have occurred to any of them that they are in parliament to change the laws to better reflect the views of their constituents.
Except the Greens are always right. RIGHT???

Clearly this is an absurdist/satirial email from Chris Harris.
Anyone following what’s going on in Aust parliament know’s it only the Greens senators that are looking out for Australian society rather than multi national corporations.
A few cases in point;
(Vic) Adam Bandt Greens MP: Meta data retention. he and 2 other independents were the only ones to vote against it and we all know that it will cost way too much money and won’t have any effect on “terrorists” and “terrorism”.
(Tas) Greens Senator Peter Whish-Wilson is the only Senator (aside from other Greens) calling for transparency of The Trans Pacific Partnership, a trade deal being drawn up in secrecy that will allow foreign (not local) corporations to sue all levels of our Governments if we change any of our society’s laws after the “free trade” agreement has been signed http://www.isdscorporateattacks.org/#!basics/c66t
(WA) Senator Scott Ludnam is the only Senator (aside from other Greens) calling for transparency regarding data retention.
For more information go to http://www.greensmps.org.au to see what their policies are and start reporting on those instead of trying to get a story out of a satirical email from a memberI really imagined a better quality of journalism from Crikey and am re-evaluating the need for a subscription 🙁

For heaven sake, Rose Ian. I don’t think Crikey advertises itself as a Greens publication. If that were the case, I would be the one dropping off the subs list!
Your comments are very thin skinned. Most of us who subscribe to Crikey expect to read criticism of our particular political leanings from time to time. And as a supporter of the Labor Party, that is exactly what I get.
And that happens far more often here than the Greens get criticised.
Really, if you had half a brain it would be lonely! Typical Green!!

Rose Ian, it may be that “Anyone” you know who is trying with or without success, “following what’s going on in Aust parliament know’s (sic) it only the Greens senators that are looking out for Australian society rather than multi national corporations.” All this establishes that you’re moving in extremely limited circles and/or not meeting people who have a reasonable grasp of politics. In 1966 I had quite bright friends who were talking about everyone they met that week at social parties opposed the Viet Nam War. Some of them became upset when I pointed out I knew this because I’d been attending the same parties at which mostly the same people attended each of the parties. If you check the 1966 Federal Election results you’ll see their confidence was a tad overstated.
But I don’t doubt you’re genuine about what you think re politics, which is sad.