Inspiration or just stealing ideas? ... is Davidson hard of hearing? ... and how to make money off death ...

Madigan hearts Xenophon. Independent Senator John Madigan announced yesterday that he would be starting his own party, with the catchy name “The John Madigan Manufacturing and Farming Party”. The JMMAFP, as we like to call it, says it’s all about what Australia produces — “a country is what a country makes”, and today the Australian Electoral Commission published the party’s constitution as submitted. A tipster read the document closely, noting that this section looks a little familiar. While Madigan’s policies aren’t quite the same as Nick Xenophon’s, he was obviously inspired by his fellow independent senator. Or perhaps the JMMAFP will have their hands full also managing the Nick Xenophon crowd …

Sins of omission. Never let it be said that the art of copy editing is dead at The Australian. Today’s edition reports the appearance yesterday of News Corp boss Julian Clarke before the Senate committee on tax avoidance – “reports”, but not quite faithfully. The highlight was an exchange between Clarke and Greens Leader Christine Milne in which the Senator from Tasmania pressed Clarke on why News Corp persisted with publishing The Australian when its only financial benefit was its value to News as a tax loss. Clarke would have none of it. Here’s how Colin Kruger reported part of their exchange in The Sydney Morning Herald:

Clarke: “With due respect, I don’t expect you to agree with this, but I consider The Australian to be the finest national newspaper operating in Australia.”

Milne: “We are not agreed.”

Clarke: “You are in a minority.”

Milne: “Not according to your sales.”

And here’s how that same exchange was reported by Darren Davidson in The Australian:

Clarke: “With due respect, I probably don’t expect you to agree with this, but I consider The Australian newspaper to be the finest national newspaper operating here in Australia.”

Notice how “You’re right” has apparently been moved up to seem like agreement with Clarke’s boast, and the mention of sales has disappeared altogether. No doubt it was only cut for space reasons.

Poppies for Profit. As we near Anzac Day, it feels like every second ad has a reference to the sacrifices made by the Diggers. A blogger has picked up on this, starting the “Poppies for Profit” Tumblr page to list all the ways companies are using Anzac Day to sell tangentially related products. The blogger told us it was sparked by an email from Virgin airlines and it didn’t take long to find other examples:

“The catalyst for setting this up was receiving that email from Virgin this morning. I checked online to see if anyone else was annoyed by it, and the internets seemed to be silent. Last year a similar email from Qantas came out offering an Anzac Day wine special, and there was outrage. Anzac Day has become Mothers’ Day or Valentine’s Day — another annual marketing sacrament. The resistance to it has slowly eroded over the years, and now the 100th anniversary of Gallipoli seems to have inoculated us against how tacky it is to profiteer from war dead.”

Another one for the Christmas tree. If you’ve been missing the Paddy Manning byline in Crikey recently, we can now tell you why. Manning is on leave to work on a biography of Communications Minister Malcolm Turnbull. So far Turnbull isn’t co-operating with the book — this is no Not Your Average Joe type of leadership job application. To be published by Melbourne University Press, the book is due this year — we’re hoping by Christmas.

Don’t hold back. The letters pages of local newspapers are often a window into the soul of the local shire, whether it be about potholes, planning decisions or local council rorts, but this gem in yesterday’s Northern Star made us smile. The paper, which covers two electorates won by the Greens in last month’s NSW election, took aim at the Daily Tele‘s Miranda Devine in a tiny editor’s note that was picked up by a reader and posted to Reddit. 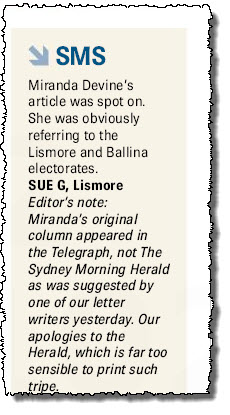 Ears are burning: Garrett to get black job?

That last item, in reference to Miranda Devine (although, I prefer “Devein”): Noice!

Since when have poppies been the symbol for ANZAC Day? Traditionally it has been rosemary for ANZAC Day and poppies for Remembrance Day. Rosemary is significant for Australians on 25th April because it grows wild on the Gallipoli peninsula. There was a time when rosemary bushes in home gardens would be almost stripped bare to provide sprigs to be worn in ANZAC Day marches. Now it’s inappropriate paper poppies. “Poppies for Profit’ might be a catchy slogan, but those pushing poppies for ANZAC Day are not aware of our history or exactly what we are commemorating and have no idea why certain symbolic flowers and greenery are worn on certain days. I suppose they saw poppies on an American TV show. Let’s hear it for rosemary!

Doesn’t the failure to accurately report the exchange negate the claim of quality?

Isn’t the Oz the only National paper?

Pav – the AFR is our only other national newspaper and I’d wonder how many of those buying do not claim it as a tax deduction.