Senators are very keen to nail multinationals for their tax minimisation strategies. Just as soon as they can figure out a way to do it. 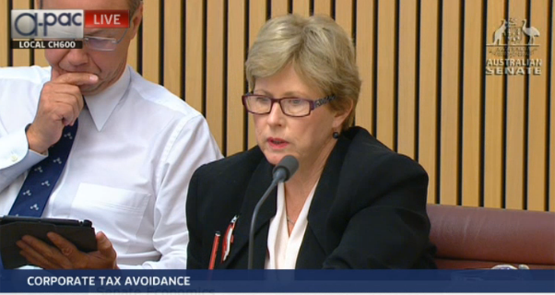 The Senate Economic Committee’s inquiry into how some multinationals are minimising their Australian tax has hit a significant — if entirely predictable — hurdle: the global tax and legal system is dizzyingly complex, and no one quite understands the damn thing.

News Corp used that confusion yesterday to attack senators and journalists who presumed to question its tax practices. And the local bosses of multinational tech companies, Apple and Google especially, claimed ignorance of their own tax arrangements. Google Australia chief Maile Carnegie said she couldn’t possibly comment on what a “double Irish sandwich” was or whether Google used it, because she didn’t have the details in front of her and wasn’t an expert. She could only talk about the taxes Google paid in Australia, and where the profits of the Australian operation went (Singapore, for the most part). Apple’s Australia New Zealand managing director, Tony King, said he couldn’t possibly say whether Apple operated “‘double Irish sandwich with Dutch affiliations”, nor how much of the revenue made by Apple went overseas. Only Microsoft’s Bill Sample, its corporate vice president of global tax flown in from US for the purpose of the hearing, could answer questions about Microsoft’s tax strategies confidently.

When News Corp’s Julian Clarke took the floor shortly after, he began by saying his company had been subjected to “relentless” attack in the Fairfax press. Referring to a series of articles by former broker and business journalist Michael West about how News Corp minimises its tax through its subsidiaries and holding companies, Clarke said the problem with West’s analysis was that he didn’t understand the difference between accounting benefits and tax benefits. What about the tax experts West consulted? Again, Clarke said, they were probably not the right type of experts.

Greens Senator Christine Milne took on the brave task of questioning News Corp CFO Susan Panuccio on the detail of West’s stories. She got a detailed explanation — the most detailed News Corp has given on the issue — but was unable to do more than put it on the record. “Was $4.5 billion repatriated last year?” Milne asked Panuccio. “$4.5 billion was repatriated but it happened in two years … It was a reduction in the equity value here, but it was a movement of shares. Shares that belonged to the company that is now 21st Century Fox. There were no tax implications.” Milne’s attempts to press the issue were unsuccessful.

Complexity can be a very useful thing. It allows companies to avoid scrutiny of their practices, all the while sounding perfectly reasonable. It’s not that they’re refusing to answer questions. It’s just that they’re not tax or legal experts. And neither are the senators questioning them. The appearances yesterday offered the promise of fireworks, but apart from a brief tussle between Milne and Clarke over the purpose of The Australian, no one’s claims or counter-claims could be very properly assessed for their truth. Because the truth is in the detail, and few of those in the room, or those watching elsewhere, could have followed the detail.

It’s a thorny problem. Tax minimisation done on an international scale by multinational companies is almost always perfectly within the law. But it is a problem for governments, which see its use eroding their tax base at a time when just about every developed nation is seeing balanced budgets slip further and further out of reach. For some companies, it means large parts of their operations can exist effectively tax-free — a neat perk not available to most.

Company directors have a legal obligation to act in the best interest of their shareholders. Paying more tax than they’re required to is a risky strategy for a listed company. And it’s not their responsibility anyway. It’s up to governments to pass laws to control tax minimisation strategies, as several of those appearing yesterday told the senators.

Meanwhile, the senators were also told the government shouldn’t act at all, but should wait for consensus to emerge through the OECD. There are costs to Australia going it alone, and companies needed clarity through a global regime.

Where solutions have been offered, they’ve tended to boil down to a suggestion to simply ignore the complexity. Richard Denniss, an economist (not a lawyer or accountant) from the Australia Institute, argued the whole structure by which companies with a global footprint pretended they consisted of dozens of separate entities was a farce. Apple is one company, for example: we shouldn’t pretend it has to pay market rates to buy things from itself, thereby keeping the profits in low-tax hubs. Denniss’ solution to the baffling complexity of the global tax system was simply, in a way, to ignore it.

A path through this maze is the reason the inquiry is being held in the first place. Opposition insiders Crikey spoke to yesterday said they didn’t expect any scalps out of the inquiry — politicians aren’t tax experts, after all. But they hoped for solutions. In this, the most important testimony isn’t likely to come out of groups like News Corp, Apple, Google or Microsoft, but from the appearances and submissions of NGOs, academics and bureaucrats — those who study and know the tax system well enough to make recommendations.

Of course, even yesterday’s panel of tax academics showed how complexity leaves room for disagreement. Every proposal got lost in the detail; every suggestion led to uncertain consequences. Navigating the quagmire won’t be easy. But if Australia’s politicians don’t do it, no one else can.

Why isn’t “Slippery Superdinos” sitting in on this?
[He’s a Senator – his peer level of incompetent irresponsibility would have made interpretations much easier for the rest of the panel?]

It’s disappointing, Myriam, to see you ending with a Latter Day Pontius Pilate type rationalisation, “But if Australia’s politicians don’t do it, no one else can.”
Why hasn’t Crikey been the leader it should be in pushing the debate down this clearly necessary road?

This is a matter of will rather than technical knowhow. There is plenty of capacity to do technical things from government, and do them well, we run one of the best and most sophisticated health systems in the world don’t we? That’s actually life and death. The difference is all in the will. We can get the knowhow, we need some major party politcians who make it their priority. That’s what we don’t have.

Bo, unfortunately it’s not simply the will of our politicians which is the problem. Meaningful changes can only come about via International agreements, but as soon as a political figure touches on this, opponents [including those who know it’s correct] can gain support against the proposal by alleging all that’s needed is (unspecified or ineffective) action by Parliament. This is dishonest and/or ill-informed, but it gains traction among voters, which is why intelligent genuine reformers are placed at a disadvantage, and those attacking them may well form the next Government.
There’s no easy answer.

It used to be that business paid tax to pay for the services it needs. Now they want the services but won’t pay the tariff.

No matter what tax laws are enacted it would seem that corporations will find ways around it.

I would suggest that since their interest is in the money that the way to raise revenue that can’t be avoided is a transaction tax on either or both of credits & debits in the banking system.

This provides a degree of visibility and accountability via the banking system.