Pyne’s sleepless nights ahead of 2016 election as Xenophon soars 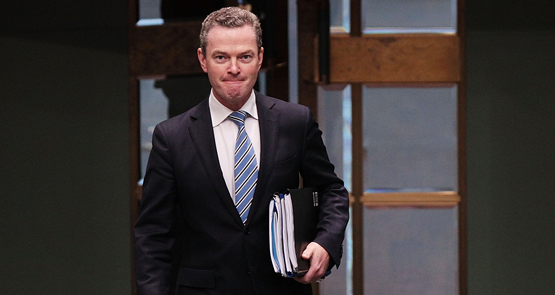 An improvement in the Abbott government’s polling fortunes since the dark days of early February has been driven by a particularly solid recovery in New South Wales, but the Coalition continues to face problems in its former strongholds of Queensland and Western Australia.

Those are the main findings to emerge from an aggregation of state-level polling featured on my blog The Poll Bludger, combining published results from Newspoll, Ipsos and Roy Morgan with unpublished breakdowns from Essential Research and ReachTEL.

While the Coalition’s position has improved in every state since the aftermath of the Prince Philip knighthood on Australia Day, and the leadership spill vote that followed on February 9, the change has been most pronounced in New South Wales together with Tasmania, where the data is less reliable owing to small sample sizes. This strengthens the suspicion, canvassed here a fortnight ago, that at least some of the improvement in Abbott’s position has been a transient spillover effect from the Coalition’s strong performance in the March 27 state election.

On the latest reading of the poll aggregate, the swing to Labor in New South Wales is in the order of 4%, compared with over 5% in Victoria and around 8% in Queensland and Western Australia.

Queensland could be seen as another example of the interaction of federal and state-level polling effects, with the Coalition’s standing suffering from the defeat of the Newman government at the January 31 election followed by a honeymoon period for new Premier Annastacia Palaszczuk, troubled though her transition to government may have been.

However, the federal Coalition’s recovery over the past two months appears to have been even weaker in Western Australia — where, perhaps not coincidentally, state Labor was found to be in its strongest position since losing office in September 2008 in a Newspoll result published in The Australian earlier this week.

Federal polling in Western Australia has followed a somewhat distinctive pattern since the election of the Abbott government, which appears to relate to the special Senate election held in April last year. Reflecting the results from that election, there was a surge at the time for the Greens and the Palmer United Party at the expense of Labor, which was not reflected in other states.

The rise in Palmer’s stocks didn’t last and, indeed, it’s only in Queensland that his party’s poll ratings are presently above the level of statistical insignificance. But the Greens continued to register at a remarkably strong 15% in WA for the remainder of last year, which raised the possibility that a substantial section of the Left vote there had become enduringly alienated from Labor owing to the contrast offered by the respective Labor and Greens Senate candidates, Joe Bullock and Scott Ludlam.

It seems, though, that some of the air is finally coming out of the Greens balloon, to the direct advantage of a Labor Party that now records a primary vote in the mid-30s — not normally anything to write home about, but better than they’ve been able to manage at any state or federal election going back to 2008.

One consistently puzzling feature of state-level polling over the past year has emerged from South Australia, where the submarines issue, the closure of Holden’s assembly plant and disastrous state byelection results have established a conventional wisdom that the bungling and insensitivity of the Abbott government has all but destroyed the Liberal brand. The quarterly Newspoll breakdowns published by The Australian earlier this week supported this to the extent of showing Abbott with a diabolical disapproval rating of 74%, compared with an approval rating of just 19%.

But despite all that, the two-party swing in South Australia, as recorded by the poll aggregate, is nothing out of the ordinary — enough to cost the Liberals the always precarious seat of Hindmarsh, but not to go the extra mile and unseat Christopher Pyne from his losable seat of Sturt, or Andrew Southcott from Boothby.

The answer to this puzzle may well lie in the primary-vote numbers, which find the Liberals down 7.5% since the election of September 2013, but Labor gaining only 3.3%. The yield from the Liberal decline, together with that of PUP, has instead been harvested by “others”, which has almost doubled from the election to its present level of 14.3%.

It’s tempting to attribute this to Nick Xenophon, who outpolled Labor in his bid for Senate re-election in 2013, and has lately been promoting his plans for a broader offensive at the next election under the banner of the Nick Xenophon Team.

The relatively mild two-party swing just noted assumes that the preferences of “others” will lean slightly to the Coalition, based on the fact that they did so in 2013. But if a strong performance by Xenophon’s candidates seriously disturbs that calculation, Pyne may yet have cause for a few sleepless night between now and the next election.

He’ll be The Flickman if he can pull this off?