The Australian Financial Review has a lot of cheek on penalty rates. And other media tidbits of the day. 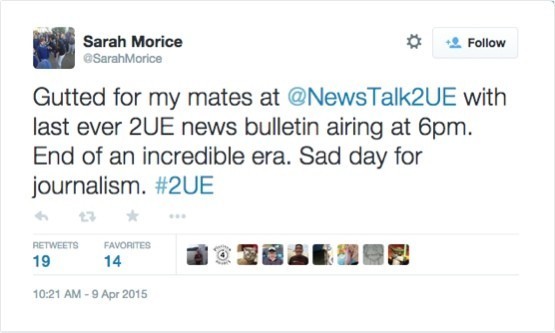 AFR returns from holiday to attack penalty rates. Even for a newspaper, The Australian Financial Review has a lot of cheek. In an editorial yesterday headlined “No balance in penalty rates” the paper made another of its usual attacks on penalty rates, despite there being no significant evidence that penalty rates affect business performance, except perhaps at the margins:

“This Easter, the industrial relations system confirmed how it has yet to come to terms with how old Australia, where mums stayed at homes and dads returned from work from 5.30 pm, no longer exists. Punishingly high penalty rates of 250 per cent ensured that many hospitality businesses shut over most of the holiday period, ensuring unmet demand for restaurants and cafes … Defenders of extreme work penalties claim they preserve “sacred time” off for families to get together. They even suggest some sort of upper-class conspiracy to rob lower classes of their leisure time. Heard about the Abbott government minister who complained that his favourite restaurant was closed on New Year’s Eve, but whose office was closed on Good Friday?”

That last bit is a slap at Melbourne Age economics writer Peter Martin who made that very point in a commentary in penalty rates in the Fairfax general tabloids on the weekend. The editorial continued …

“Of course, there is no demand for politicians or their staff to work on Good Friday. But there are plenty of young Australians who would welcome the opportunity to work over long weekends if offered, say, a 50 per cent premium. That hardly seems extreme or unfair.”

Meanwhile … The Australian Financial Review doesn’t claim that it is being hurt by penalty rates, but did any one see fresh editions of the paper on Good Friday, Easter Saturday or Easter Sunday, like its bitter rival The Australian? No? The AFR doesn’t publish over Easter or the Christmas and New Year breaks. It runs what it calls “Bumper editions” to save money — newspaper sales are low on such days, and that’s got nothing to do with penalty rates. The AFR claims it’s because there’s not much financial news, but there is these days. China and other Asian markets don’t celebrate Christian or Western holidays. The real reason is for Fairfax to save money with lower labor, paper and ink costs (staff have been encouraged to take holiday days to fit in with management, but one staffer said yesterday no one seems to claim for that any more because of the need to service the website). Staff were able to claim penalty rates for Sunday work, but another staffer says no one does these days. Staff get time on in lieu for working Sundays or extra long hours, but that was the case when I worked there 30 years ago.

It is simply a cost saving that the AFR doesn’t appear, and this week it had the hide to lift its cover price by more than 8% to $3.80. Talk about giving less for more. — Glenn Dyer

Abbott says nice things about Aunty. The ABC today announced the launch of Australia Plus in China — a website produced in partnership with Shanghai Media Group, featuring lifestyle, business and cultural content in English and Chinese aimed at both expat and Chinese audiences. The launch of the website marks the first time a major Western media organisation has launched a Chinese registered web portal, a fact not lost on Tony Abbott who hailed “yet another important occasion in the Australia China relationship”.

“The potential for Australia’s relationship with China to grow and prosper has never been greater and the launch tonight is a testament to the high degree of respect for Australia and for the ABC within China,” the Prime Minister said. His comments are interesting as only last year his government cancelled a contract the ABC had with DFAT to produce the Australia Network, a foreign-focused TV network broadcasting news and current affairs into Asia. The Australia Network was, however, never available in China, so today’s launch is new territory for the ABC.

The website will feature content in both Mandarin and English, and be produced by three Chinese-speaking staffers in Melbourne and a two-person digital team in China. Media organisations are subjected to strict censorship in China, but the launch is unlikely to come up against this, as the website will not be offering news.

After the death of the Australia Network, the ABC plans to roll out country-specific websites aimed at India, Indonesia and Papua New Guinea, in addition to the just-launched China portal. — Myriam Robin

The Tele today published an opinion piece by Moore, which she’s put up on her website. In what may be viewed as a thawing of relations between the mayor and the paper, Moore criticised Lindsay MP Fiona Scott for “ignoring the facts”, which were delivered in the independent SGS report into the WestConnex road project. Scott disagreed with the report findings which found that 7% of western Sydney residents work in the CBD and with 89% of them using public transport, the proposed $15 billion for the road would be better invested in public transport.

On Tuesday, Moore slammed the Tele on her website saying it “won’t publish” the findings of the SGS report, adding that the statistics used by the paper were “just wrong”.

This is not the first time that Moore has hit out at The Daily Telegraph for “ignoring the facts”. Last October, she lashed the paper for publishing a “misleading” report on the city’s budget and published her responses to the questions posed to her in contrast to what The Daily Telegraph included. –– Crikey intern Emer McCarthy

Family found out on WIN. The Australian Communications and Media Authority (ACMA) has found WIN Television guilty of breaching the Commercial TV Industry Code of Practice in an August broadcast.

After showing footage of a fatal car crash on August 23 last year, WIN breached clause 4.3.8 of the code, which stipulates: “in broadcasting news and current affairs programs, licensees must take all reasonable steps to ensure that murder or accident victims are not identified directly or, where practicable, indirectly before their immediate families are notified by the authorities”.

The footage, which was a part of a Nine News update, showed enough characters of the vehicle’s number plate, as well as its colour and model that led to it being easily identified by the victim’s family. Subsequently they lodged a complaint with ACMA as they were not previously notified of the accident.

ACMA cannot prosecute WIN for the breach of code but has called for the network to “ensure its news team is aware of the result and AMCA’s reasoning” and to “provide further training to its news teams on how to better handle these types of matters in future” amongst other suggestions. — Crikey intern Emer McCarthy

Remake strikes gold. With the ABC kicking off the broadcast of the first series of the BBC re-make of Poldark (the bodice-ripper historical drama hit from 40 years ago) on Sunday night, the Beeb has commissioned a second series because of very high ratings. The BBC said overnight the first series was one of the most watched program in the UK in the March quarter, averaging 8.1 million viewers. It helped the BBC achieve its highest ratings in Britain for a decade.

Still Open All Hours, stars David Jason playing the same, but now aged character he played alongside Ronnie Barker in the original Open All Hours, was watched by 7.5 million viewers. The new series of Poldark will consist of 8 episodes covering books three and four of the Winston Graham novels. — Glenn Dyer

Front page of the day. A worrying trend for conservative leaders  … 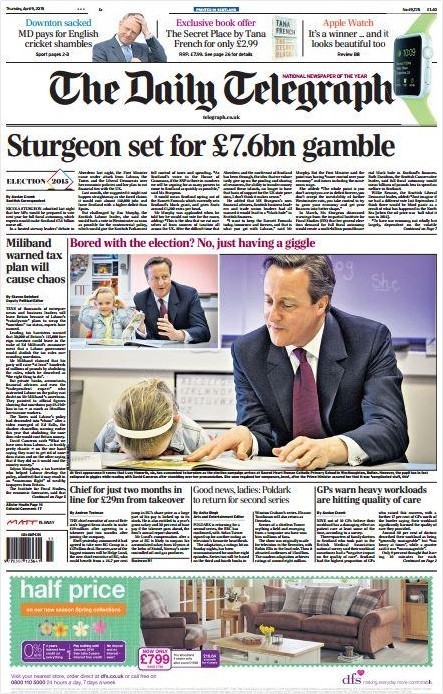 Punishingly high penalty rates of 250 per cent ensured that many hospitality businesses shut over most of the holiday period, ensuring unmet demand for restaurants and cafes…

Well then, if there’s really unmet demand then the obvious solution of adding a small public holiday surcharge to all prices, sufficient to cover the higher wages costs, shouldn’t take more than a few minutes to implement.

Staffing is one of the few parameters that a manager or owner can actually control. The biggest culprits most likely to send a business to the wall are greedy Landlords, Franchises or both.

Staffing is one of the few parameters that a manager or owner can actually control. The biggest culprits most likely to send a business to the wall are greedy Landlords, Franchises or both.

The biggest genuine reason for high wages and high prices in this country is to pay for the absurdly high cost of property (to either buy or rent/lease).