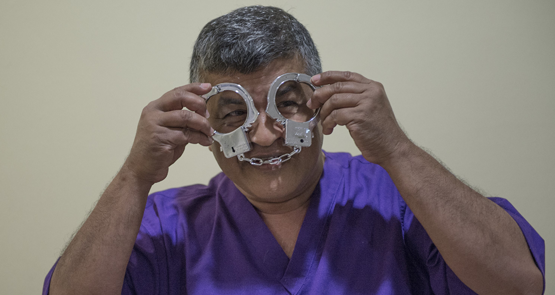 The following day The Malaysian Insider CEO and the chief editor of its parent publication were also arrested. Police have said all five will be charged under the colonial-era Sedition Act, which carries up to three years’ imprisonment.

The arrests come amid a broad and unprecedented crackdown on Malaysia’s opposition movement. More than 150 activists, opposition politicians and lawyers have been arrested this year alone either under the Sedition or the Peaceful Assembly Act, which imposes strict regulations on public protesting.

The Sedition Act includes offences such as promoting hatred of the government. It has long been seen as archaic and is used selectively to stifle dissent.

Malaysia doesn’t have a free media. All traditional media is controlled through strict government licensing, meaning newspapers, radio and television stations remain almost entirely in the hands of government allies. However, unregulated internet has allowed a growing number of online media outlets to provide more critical coverage of the government, which has ruled the country for all of its 57 years since independence.

The news report in question alleged that the Malaysia’s royal Council of Rulers had rejected a proposed new bill allowing stricter punishments in the Islamic legal system, a hot topic at the moment that is driving a wedge between the secular and Islamist party within the opposition.

In a statement the Institute of Journalists Malaysia slammed the arrest, saying the response was a disproportionate response and that if the report were inaccurate a request for retraction and an apology would have been sufficient. However, it also noted that The Malaysian Insider had failed to seek a right of reply.

However, The Malaysian Insider is not the only news organisation under attack. Last Friday, Zulkiflee Anwar Ulhaque, a political cartoonist better known as Zunar, from the online portal Malaysiakini was charged with nine counts of sedition and now faces up to 43 years in prison.

The charges were in relation to tweets criticising the country’s judiciary after opposition leader Anwar Ibrahim lost his appeal against sodomy charges in February and began serving five years in prison.

Anwar’s conviction was largely seen as politically motivated. “The lackeys in black robes are proud of their sentence. The rewards from the political masters must be plenty,” one of Zunar’s tweets read.

The government’s war on independent online media has escalated in recent years as more and more young and urban Malaysians turn to their smartphones for the news instead of government approved papers. The government began by encouraging more government-friendly online portals and then launched defamation lawsuits aimed at financially crippling organisations like Malaysiakini.

However in September last year, the government upped the ante when it arrested Malaysiakini journalist Susan Loone for sedition after she quoted an arrested activist as saying “I’m being treated like a criminal” in one of her reports.

The idea of shutting down the online media outlets altogether has been mooted, however there are fears the backlash would be too great. The government has instead opted for charging individual journalists and publications, at the same time as it has begun arresting citizens for “seditious” posts on social media.

The crackdown comes amid broad criticism of Prime Minister Najib Abdul Razak from within his own party, including an ongoing public attempt to oust him from the top job by the still-influential former prime minster Dr Mahathir Mohamad.

At the 2013 general election the government suffered its worst electoral showing ever, losing the popular vote but able to hold on to power due to a highly gerrymandered system. There are fears within the party that it could be heading for an election wipe-out in 2018.

Many see the crackdown as an attempt to appease right-wing elements in the party who are calling for Najib’s removal over the poor electoral performance and a damaging widespread corruption scandal (even for Malaysian standards) implicating his office.

*Disclosure: Jarni Blakkarly has been an intern for and continues to contribute to Malaysiakini.

There will be a collapse of the Governments in Thailand and Malaysia, just a matter of when