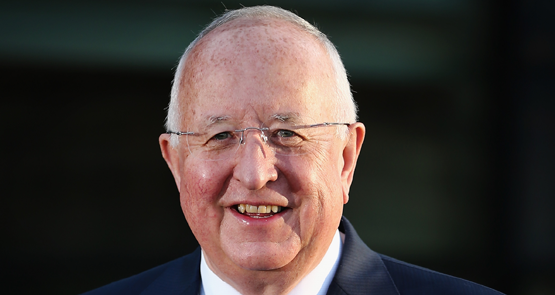 As the iron ore price stopped plunging this week — it closed last night at US$47.60, up a measly 30 cents and only a couple of bucks off its 10-year low, and the simple rules of supply and demand dictate that it will slump again — a fresh roadblock has appeared in the way of Australian producers.

The theory that more ore at cheaper prices would force high-cost, low-quality Chinese iron ore mines to go out of production is clearly a grave miscalculation. Big Iron appears to have got it horribly wrong, spending billions of shareholders’ funds to expand capacity for demand that has evaporated — to the detriment of every Australian.

Economist and veteran China-watcher Ross Garnaut is just the latest to join Crikey on the iron ore bandwagon. Chinese steel production has peaked, at about 800 million tonnes or so. Garnaut reckons it’s heading down to 600 million tonnes. That would drag iron ore to US$30 per tonne, or less.

Many mining companies are already shuttering operations and busy shedding staff in order to survive, particularly Fortescue Metals Group. And, in the background, Gina Rinehart lurks ready to add tens of millions of unwanted tonnes into the market later this year. Big Iron management drank the Kool-Aid that said China would keep producing steel at an increasing rate until it was making more than 1 billion tonnes a year.

So we wait — no doubt in vain — for the mea culpa from Sam Walsh, Rio Tinto’s well-fed chief executive, the man who, before he was boss of the company, ran its iron ore division (presiding over the Stern Hu corruption debacle) and sent upstairs the very forecasts that have helped right royally stuff up the Australian mining sector.

For sure, Walsh is not the only culprit. BHP’s former chief Marius Kloppers and his team dreamed up similar numbers, but the South African got his marching orders from the canny Jac Nasser. Walsh got promoted.

To some extent, most producers are guilty of the same error, but to nowhere near the levels that Rio Tinto, BHP Billiton and Fortescue Metals Group forecast — China experts all, just ask them. They estimated China would stop huge licks of iron ore production, allowing more Australian ore into the market. Yet right now China is mining about 250 million tonnes of ore annually, and that amount does not appear to be going to be cut back much further, now authorities have promised to prop up the sector — at Australia’s expense.

How Big Iron didn’t see this coming is a real head-scratcher. China has made it very clear that resource security is at the heart of China Inc’s strategy, and mines provide employment and ballast to local economies. As well, they are a tactical tool for the country to keep driving down the price, as we are witnessing. The Chinese will be relishing putting the screws on the big miners that they believed, rightly or wrongly, were screwing them for years. That they are now openly admitting to wanting a subsidy program is a sure sign that they are not going to back off now — quite the opposite. Yet the geniuses at Big Iron assumed they would behave like normal market participants and retreat/cut production when they began losing too much money. Again, this is bewildering and, let’s face it, FMG is not doing that either right now, and it has shareholders to answer to.

“Despite the debacle, the least worst miner — and that’s Rio right now — gets to win.”

“There have been discussions about providing subsidies to domestic iron ore mines for several years. I expect this year it will come in the form of tax relief of around $5 per tonne. Some companies have already received tax relief at this level,” J Capital Research Managing Director Tim Murray, Crikey’s iron ore sage, said.

“Domestic iron ore mines are taxed in many different ways. The big taxes collected for the central government are VAT 17% and corporate tax. The next biggest tax, which is levied locally, is a resource tax. That varies from 2 RMB (AUD $0.42) per tonne to 8 RMB (AUD $1.68) per tonne for ore mined.

“Given that most mines need at least 3 tonnes of ore to make one tonne of concentrate that is a resource tax of 6 RMB (AUD$1.26) to 24 RMB (AUD$5.04) per tonne for concentrate. We estimate that 30 RMB (AUD$6.30) per tonne is the most common resource tax paid. As it is a local tax there will be different concessions in different areas.”

Following a meeting of the State Council yesterday, Chinese Premier Li Keqiang said that China would reform of the operating environment for iron ore companies with structural reform and support for development of the mining industry. As of May 1 the resource tax will be reduced by 40%. This has been applied locally at different rates.

Qu Xiuli, deputy secretary of the China Iron and Steel Association, said: “Recently domestic iron ore mines have been saying that the tax burden is heavy, the Chinese resource tax is calculated on raw tonnes and is taxed at 12 RMB (AUD$2.52) on every raw tonne — on a concentrate basis that is 50-60 RMB (AUD$10.48-12.58) per tonne.”

The China Metallurgical Mining Association has been, understandably, lobbying for the iron ore miners for years.

“At a domestic iron ore and steel conference I attended in March this was a hot topic,” Murray said, adding that the Chinese Ministry of Industry and Information representative at the conference said there will be tax relief for iron ore mines this year. Yet there were almost no specifics discussed.

But Murray reckons that the real subsidies to domestic iron ore mines will be access to low-cost loans to cover losses and or directives to state-owned steel mills to buy domestic iron ore.

Australia and China have still not inked the free trade agreement that was so loudly trumpeted late last year — it’s not far away by all accounts, but nonetheless, at present, it’s non-existent. One wonders if Trade Minister Andrew Robb wants to raise this as an issue at the last minute — bet you he doesn’t, at least not too strongly. In any case, it would be a waste of breath; Australia’s miners only have themselves to blame.

Atlas Iron is the latest high-profile victim of the ongoing rout. On Tuesday, Atlas suspended trading pending an announcement regarding its operations. Whether the company will ever fully function as a standalone entity again is now in doubt.

The rather sad irony is that Rio’s better ore and lower cost base means that, despite the debacle, the least worst miner — and that’s Rio right now — gets to win. Once again, the Peter Principle wins the day, and shareholders — and ordinary Australians — are left holding the can. Class action, anyone?

All Australia wants for Christmas is stronger iron ore prices

Guy, why do you perpetuate the myth which gave “I was only 19” its effectiveness? The Conscripts who went to Viet Nam all volunteered. None was sent who didn’t volunteer. This has been raised repeatedly on Crikey; and you have never responded denying its accuracy.
It’s true, as you say, that “In the 1940s, the Communist Party of Australia developed a national culture strategy, drawing on notions of mateship and de facto egalitarianism to suggest that the Australian worker was a, ‘natural Communist’”.
It had emotional appeal of course, but was promulgated by a leadership which cared little for Australia beyond their genuine but absurd belief Australia was ripe for a proletarian revolution. This utopian dream was still strong in 1949 when intelligent Communists were convinced once again that the revolution was nigh.
The 1960s saw new and equally quaint competing delusions among the splintered ‘communists’ which did little to help the nation or its workers, and today this sort of millennium mentality takes far more versions than was the case pre Postmodernist times.
Sadly, Crikey spends a not inconsiderable time talking about what’s wrong with groups not part of what Crikey feels is its bailiwick; time I’d suggest might be better spent analysing the common features shared by both Right and Left which all help undermine what’s left of valuable Western Democratic principles.

Further evidence that highly paid CEO’s are competent is a myth.

Don Argus is venerated for his stints at NAB and BHP.

NAB is still struggling with his UK purchases and look how the Homeside deal went.

BHP was effectively given away.

And some people criticise the public sector for waste. Compared to these guys the Govt is a rank amateur

I thought that this article was about iron ore mining, but I do admit to reading things differently and perhaps too simply than others.
Wouldn’t it be good if the solution for Australia was for us to again produce our own far superior steel?
I have been unimpressed by these dodgy FTA’s that Abbott’s govt has been signing us up to, so don’t expect anything better of them with the Chinese one, Howard’s was no better with USA.
China is also about to subsidise their coal mining too I think.

Jane, Australia post WW II had a particularly efficient Steel Industry by world standards because of several factors.
1. Much of the world’s productive capacity had been destroyed.
2. We had state of the art new technology refineries.
3. Iron deposits at Whyalla, though small, were close to the sea as were our coal fields and steelworks, making transport costs relatively low.
Other nations quickly rebuilt their capacity, and then had newer more efficient plants than us. Australia had to turn to distant, less ideally situated iron ore deposits, which consequently were more expensive. Open cut coal mines were easier to mine, but Awards continued to reflect underground rates, and employment practices imposed by unions often didn’t help. It’s not a problem for which easy effective solutions are available, no matter how much some opportunistic politicians and vested interests may pretend they are.
Unfortunately FTAs (with whatever faults some at times may have) are needed if Australia is to have any chance in our current competitive world.

The lesson that the Chinese are not always rational market actors was seen in the aluminium market over five years ago as the Chinese started, and continue to this day, to subsidise the high cost production for the same strategic reasons. This subsidy has hurt the fortunes of many western producers including ironically Rio Tinto through its purchase of Alcan at a massively inflated purchase price.