<em>Dallas Buyers Club</em>: how the gays have been co-opted for profit

In more ways than one, the depiction of Ron Woodroof in Dallas Buyers Club reflects the greed and profiteering of the film's owners. 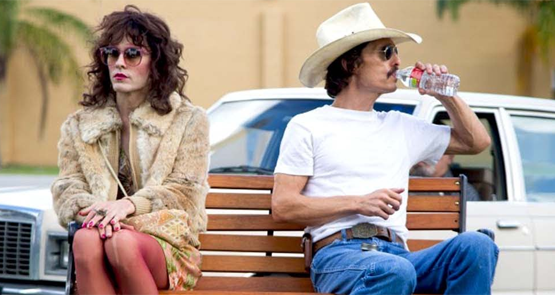 It’s tough to admit, but nonetheless we must: Dallas Buyers Club has taught us some lessons about our individual greed, lawlessness and insolent disregard for the intellectual assets of others. No, silly! I’m not talking about the baggy morals of those alleged unlawful downloaders of the film whose identities the Federal Court have demanded be disclosed. I’m talking about the film itself. End-to-end, from its production to its narrative arc, this piece of Oscar-bait tells its audience in no uncertain terms that both theft and unlawful possession are just awesome.

The Federal Court decision does give us a nice preview of an info-dystopia where your right to privacy will always be defeated by a company’s right to sweet, sweet profit. (Who are these Federal Court guys, by the way? I must read up. They’ve had a busy April finding in favour of the powerful.) We’ll let Stilgherrian keep you apprised of this Coming Attraction. In the meantime, let’s look at a feature, unfairly praised in my view, whose plot elevates personal striving by breaking the law and whose misrepresentation of the heroes of the AIDS underground is, if not an actual copyright violation, then certainly an unethical and ignorant grab for the lives and deaths for others.

If you’ve not seen the film, it proceeds thus: Ron Woodroof, a real man diagnosed in 1985 with HIV when the virus was a quick route to certain death, is having sex with not one woman, but two. This is surely the visual equivalent of the phrase “No homo”. Woodroof, who would in real life go on to copy the “buyers’ club” model for access to HIV treatments that had been founded in San Francisco and elsewhere by brave gay men undocumented in the film, is a selfless hero and not gay. Did you get that? Really, really heterosexual.

Except, it seems, for all the film’s efforts to tell us that its hero just loves muff and could not have possibly contracted the then-deadly virus through bum sex, Woodroof might not have been a Proud Heterosexual. “I never knew anyone who thought Ron was straight,” his nurse and friend Penny Krispin told the London Telegraph. And, even if he were, it seems very unlikely he was the bigot ripe for redemption that appears on film. The film’s creator, Craig Borten, who met, according to published reports, with Woodroof on a single occasion, told Variety the man was as “racist and homophobic as they come”. Many of Woodroof’s friends disagree.

Let’s allow Borten, who struggled for 20 years to make this film, a little creative licence, though. In order to make an act of redemptive tolerance for homosexuals cinematically powerful, perhaps you have to exclude the likely facts that its hero was already tolerant, redeemed and occasionally homosexual. Maybe you could make a greater good case for Borten’s artistic licence and allow that changing the story of a man whose family and closest friends were reportedly never interviewed by screenwriters to promote tolerance is perfectly acceptable.

Well, maybe. On the conditions that (a) Philadelphia had never been made and accepted and lauded more than 20 years ago for its central depiction of a homosexual man with HIV; and (b) queer characters had been not just sympathetically but fully realised as actual humans in the film. And, no, the Jared Leto character of trans woman Rayon doesn’t count. Sure, it’s a decent piece of acting and Leto’s sustained sotto voce can almost make us forget that he’s in a terrible band. But enough with making the gender-queer objects of pity, already. In an era where one of the world’s bravest people is a trans woman and green lights were awarded for truly thoughtful depictions of trans people on works like Orange is the New Black and Transparent, there is really no need to impoverish a rich life by making the film’s single queer representative little more than a victim smeared in runny mascara.

Even allowing that Borten and those producers of the film now in hot pursuit of Australians who unlawfully downloaded it believed that they were engaged in the Good Work of detonating homophobia by telling a version of the terrible truth of AIDS, they were pretty lazy about it. And maybe even a tad untruthful. The drug AZT is depicted as a villain in the movie, and it is only at the film’s closing credits that we see an admission that this anti-retroviral that Woodroof, an under-informed drug-runner who was working in real life for profit as much as he was working for “redemption”, says is poison for two hours is still used in combination HIV treatments today.

Speaking of combination therapies and how these turned HIV from a death sentence into a manageable disease: one of the most fascinating things about the buyers’ clubs from which Woodroof borrowed his inspiration and from which Dallas Buyers Club LLC profited is not just that they were overwhelmingly managed and staffed by gay men, but also they helped find this cure.

Woodroof was a renegade entrepreneur known for distributing faith-based cures with the same enthusiasm he sold Compound Q and other drugs. On this count, DBC is accurate. The film, however, does not criticise but valorises its hero for his uncritical approach to drug peddling. And what it leaves behind is a pretty “inspiring” story of how groups like Project Inform actually used scientific methods to fast-track access for AIDS patients to promising medications.

Martin Delaney, a gay man who was not HIV positive, is one of the many heroes of a civil rights and medical activist movement that not only pioneered community trials for the treatment of a disease that, in many cases, gave patients mere months between diagnosis and death. He actually changed the US Food and Drug Administration’s approach to the delivery of trial drugs for all patients suffering all potentially fatal diseases. Since its tick to thalidomide, the FDA had been understandably cautious in its approval process, but all that changed when Delaney, who had worked covertly and openly with immunologists in his buyers’ club, made a case for the medical equivalent of humanitarian intervention. During his life, Delaney was given a special recognition by the National Institute of Health. Upon his death in 2009 to liver cancer, he was eulogised in The New York Times and The Lancet for his extraordinary services to US citizens who were facing death due to disease. So he might not have been straight and therefore a less sympathetic proposition for the “mainstream” audiences Hollywood likes to imagine and underestimate. Neither was Woodroof, in all likelihood. But Delaney’s life is, unlike Woodroof’s, very well documented and his monumental legacy cannot be creditably compared.

Delaney is just one of the activists in the so-called AIDS underground who fought for the lives of many gay men. His is just one of the stories callously appropriated by the producers of a “no homo” film that does nothing to “raise awareness” about homophobia and does little to shed light on the protracted difficulty many HIV patients around the world experience in receiving treatment and support. The gays, in this film, are titillating extras, as they so long have been, and not only are the courageous stories of many people co-opted for profit, but theft itself is valorised.

Woodroof is an interesting guy, of course. But his unscientific interest in anything from milk thistle to Peptide T didn’t advance the management of HIV, and the film’s unscientific disdain for double-blind trials performed by researchers advances a disdain for medicine itself. The same medicine Delaney and others had been investigating in the dark with the selfless help of sympathetic scientists.

More than anything, DBC shows us that greed and personal striving and flouting the law are the right and moral things to do. So if you do end up getting a letter from Dallas Buyers Club LLC, perhaps you could tell them that you downloaded the film because you believe very strongly in its values.

So, money-grubbing AND snubbing evidence? Why, it’s almost like Big Alt is making movies now.

@KennyB I miss such filthy talk

Thanks for another great article Helen. It has really whetted my appetite to see the movie myself.
Downloading it tonight via NBN.