The emotional poignancy and narrative depth of Fast and Furious 7

"Sensitive" and "respectful" are not the kind of words you'd expect to be associated with the Fast and the Furious franchise, but the latest installment is both those things. 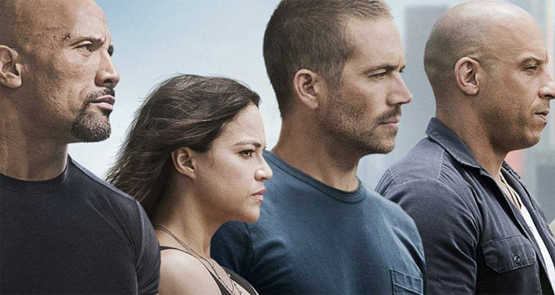 It might not mean much to the average Crikey reader to say Furious 7 is the best instalment yet in the Fast and Furious franchise. Perhaps it means a little more to say that for audiences with a soft spot for all-guns-blazing action it is the only must-see movie of the seven made so far (at least three more are on the way).

As the series has progressed the filmmakers have worked harder to innovate. Scripts became increasingly plot-driven and the action scenes more intricate. Attempting to one-up previous stunts is no easy feat given the franchise has smoked, hurled and flipped vehicles in every conceivable direction, a sort of reverse TAC commercial where everybody keeps living no matter what.

Many of the most interesting innovations in Furious 7, directed by Australian James Wan, came from a dark place. Star Paul Walker died halfway through production when a high-speed ride in a Porsche Carrera GT (unrelated to the movie) ended in a flaming ruin.

Thus a franchise in part about dumb ways people (predominantly men) amuse themselves became inseparable with an actor whose legacy is in part about dumb ways to die. Originally slated for a July 2014 release, production was put on hold in November 2013 as Wan and the producers figured out a way forward. They reworked the screenplay and decided to use digital wizardry to continue Walker’s unfinished performance.

This was achieved with more than a blessing from Walker’s family. His two brothers filled in for him, and Peter Jackson’s effects company Weta Digital layered onto their faces footage and renderings of Paul. The work involved processes known as light matching, 3D tracking and camera match moving.

Distributor Universal Studio won’t say which scenes feature the “real” Paul Walker and which were created posthumously. This has a slightly unsettling effect; you’re never quite sure whether you’re watching an actor or a digital replica of one.

No doubt this is a sign of the future: Hollywood as an industry that refuses to surrender its star power to something as constraining as mortality. Perhaps it is just a matter of time until we start seeing new movies starring James Dean and Marilyn Monroe.

It’s surprising for a big-budget franchise movie to summon these kinds of thoughts. Also surprising is the terrific job Furious 7 does not just in giving its late star a rousing send-off but also in contemplating ideas around death and legacy. Like the digital effects, it is not clear how much was part of the original plan (given the screenplay was reworked) and how much was reactionary.

Either way, the result is a spectacular movie with an allegorical depth nobody saw coming. Hollywood has a new benchmark for nuanced responses to real-life tragedy — and it’s the seventh instalment in a series about foot-to-the-pedal hotheads.

Death lingers throughout Furious 7. Early in the running time Dominic (Vin Diesel) visits a cemetery where Letty (Michelle Rodriguez) is mourning the passing of a friend. Twenty minutes later he’s back in it, this time in daylight, vowing revenge before whizzing around the gravestones in a dramatic car chase.

Jason Statham plays bad guy Deckard Shaw, an angel of death who pops up at various menacing moments, as if reminding the characters not to take their existence for granted. Mr Nobody (Kurt Russell) describes him as “a shadow” and implores Dominic to nail Shaw so “your family don’t go to any more funerals”.

Later, Walker’s character Brian calls his wife with news something big is about to go down. He plants the seed that he may never return; Walker’s death has made this otherwise expendable scene feel sad and heavy. There are other nods to death and the afterlife, from an aerial view satellite called “God’s eye” to Diesel’s eulogy-like dialogue. With that trademark gravel drawl he delivers lines such as “this is where he belonged, home” and “you’ll always be my brother”.

The performances are pitched at just above the level of a daytime TV soap. They don’t quite have the gravitas insinuated by Diesel when he told Variety, without sarcasm, that Furious 7 is on track to win an Academy Award for best picture. Elaborately staged action scenes give the film a high-end feel, and like the classic Elvis Presley vehicle Viva Las Vegas the racing scenes are stand-ins for sex: explosive moments when innuendo won’t cut it.

The characters are represented in the mould of Greek gods, infallible and indestructible. Given the circumstances around Walker’s death, has any film ever demonstrated more powerfully the gulf between escapism and reality? The fiction of the hero versus the vulnerabilities of real life? Has the balloon ever been pricked like this before?

Alfred Hitchcock once said drama was life with the dull bits removed. Furious 7 presents a strange reversal of that, the flaming high-speed wreck of its star’s final moments on earth swapped for an understated fictitious send-off involving family and the beach.

The best of many spectacular stunts is a jaw-dropping sequence, which has Brian and Dominic steal a car from high up in a skyscraper in the Middle East. “Time to unleash the beast,” says Vin, who sees Shaw appear and  — with nowhere to go — drives the car right through the building’s glass walls.

James Wan cuts to a long shot of the vehicle, in front of a glorious sunset, sailing out of one building and landing neatly into a second. In building No. 2 Dominic discovers there are no brakes and the daredevils sail out of the second building and into a third. When the car lands again they jump out and we watch the vehicle plummet to the ground, where it crashes and bursts into flames.

Looking at that car consumed with fire is a reminder that Paul Walker did in the movies what he couldn’t do in real life: leapt out of a moving vehicle just in the nick of time and walked away unscathed. Furious 7 is a strange Hollywood eulogy, possibly the strangest. In a sense this gung-ho action movie is a celebration of the very thing that killed him. Somehow, it is both sensational and respectful.

Snuggle up to the movies