Guy Rundle responds to Gerard Henderson. And other media tidbits of the day.

Khmer Rouge off. Head of “living room in drab terrace house” (otherwise known as the Sydney Institute) Gerard Henderson is not happy — in this case, that his campaign to claim the late Tom Uren as a fervent supporter of the Khmer Rouge is going awry.

Said Hendo in his beloved Media Watch Dog column last week, in an item about yours truly:

“[A]ccording to Rundle, Tom Uren’s barracking for Pol Pot and the Khmer Rouge in the late 1970s was just ‘foolish’ and ‘inconsequential’. This despite the fact that, unlike the (then) academic Windschuttle, Uren held important positions in the 1970s — initially as a senior minister in the Whitlam Labor government and later as Deputy Leader of the Opposition. Moreover, unlike Windschuttle, Uren never outed himself as a one-time Pol Pot barracker. Indeed, Tom Uren went into denial about his Khmer Rouge period — until outed by Hendo’s files.

Uren, in opposition, made a couple of endorsements of the Khmer Rouge government in the 1970s. So did, as we mentioned, some leftists who ended up on the Right. One such is ex-Quadrant editor Keith Windschuttle, who called for peasant revolution in Australia in the ’70s. Gerard says that Windschuttle apologised for his support for the KR in the late ’70s.

Well, maybe. Meanwhile, the more interesting question concerns those in power at the time, such as the Fraser government, which recognised the KR and helped assure their seat at the UN and perpetuate their rule in a corner of the jungle. Future PM John Howard appears to have been relaxed and comfortable with that decision. He and the government that Gerard Henderson had worked for as a staffer did far more to assist the KR than either Uren or Bruvver Number Keef managed. — Guy Rundle

ITV makes another play. UK commercial TV group ITV is making another big acquisition — it’s in talks to buy the TV production arm of  The Weinstein Company, the production studio set up by veteran film and TV producer Harvey Weinstein and his brother Bob. Media reports in the US and UK say ITV could pay between US$300 million and US$400 million initially for the company, though bonuses and performance payments could lift that to as much as US$950 million (more than A$1.8 billion).

The move comes a month after ITV bought Talpa Media, the company behind The Voice, founded by Big Brother creator John de Mol, for an initial amount of 355 million pounds (A$680 million), which could rise to as much as 735 million pounds, or A$1.4 billion. If the Weinstein TV operations are bought, the deal will take the amount ITV has paid for TV production companies in the UK and US in the past three years to close to A$4 billion.

The Weinstein purchase would be the largest of those deals. The Weinstein company produced the Marco Polo series for Netflix (it’s in its second series) and is working on a TV version of War and Peace for the BBC. Other productions include The No. 1 Ladies Detective Agency, designer reality show Project Runway and Mob Wives.

John Malone’s Liberty Global is the biggest shareholder in ITV, with a 6.45% stake. — Glenn Dyer

Bollore eyes Sky. Is this the ultimate act of a desperate, wealthy man, or an inspired assault? According to a report from Reuters, the big French media group, Vivendi — which is controlled by one of France’s richest men in Vincent Bollore — is thinking of launching a takeover bid for Sky, the UK-based European pay TV operator, 39.1% controlled by the Murdoch clan’s 21st Century Fox. Reuters has emphasised a possible offer for Sky is only one of a number of options being looked at by Vivendi (which has just agreed to spend a quarter of a billion dollars buying the video-sharing website, DailyMotion).

Reuters says Vivendi is looking at Sky as part of a strategy of boosting its TV business (Canal Plus) outside France. Sky controls satellite TV businesses in the UK, Germany and Italy, with overlaps in Austria and France. Sky is worth more than US$26 billion, and the eventual cost, including the huge Sky debt (taken on in buying Sky Deutschland and Sky Italia last year from Fox), could be well over US$35 billion.

Based on what the level of control the Murdoch clan has of Sky, you’d have to say Vivendi and Bollore (who is looking at these sorts of deals because he is under increasing pressure from a group of activist shareholders) are being overly ambitious. Would Rupert Murdoch really sell the jewel in his global media business? After all, Sky is his baby — he created it and drove it in the UK and then into Europe (with the help of some top-notch managers, such as Australian Sam Chisholm). — Glenn Dyer

They shall know my name.  There are a few ways one can be published in The New York Times. A Pennsylvania psychiatrist decided to choose the easy option. Bravo. 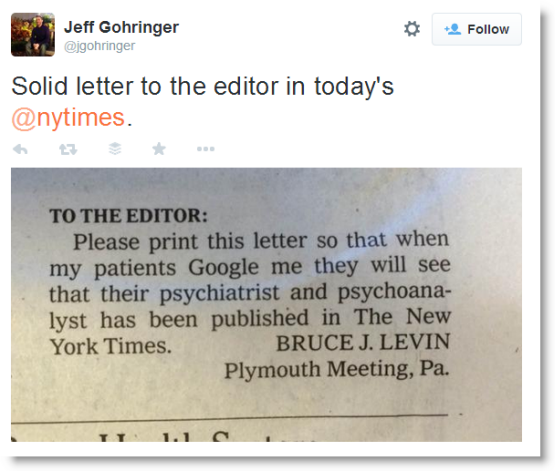 Easy rider. Two days after the ABC aired its investigation into the safety (or lack thereof) around the use of quad bikes, the NT News chimed in with evidence of its own. 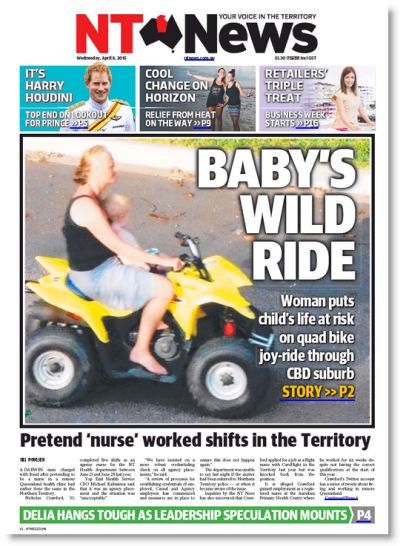 Lay off the Greens

A Green future is the only way

people all over the world put babies and young kids on motorbikes and wheels of all types….its how they learn incredible balance which silly western cultures seem to have lost.