Pop stars, reviews and commissions all get Australians talking.

The four day Easter weekend has seen our weekly political coverage drop significantly from past weeks, with the New South Wales election falling by the wayside in its aftermath and the focus more evenly spread between state and federal issues.

Social Services Minister Scott Morrison was a big mover this week after calling for possible repercussions for parents receiving welfare benefits that opt-out of vaccinations for their kids; while ongoing coverage of the Moss Review into the Nauru detention centre has seen worsening allegations about the department of Immigration and Morrison’s leadership at the time, and the sexual abuse and self-harm of children in the facility.

Health Minister Sussan Ley reappears in our index after a few weeks out of the media spotlight, having announced nearly $300 million to extend hundreds of contracts for mental health bodies for 12 months. Ley will likely climb the index further following this morning’s announcement with Prime Minister Tony Abbott of a national taskforce for the illicit drug ice.

Meanwhile, the Western Australian Labor Party has recorded its first Newspoll lead over the Liberal-Nationals since 2008, with Opposition Leader Mark McGowan also ahead of Premier Colin Barnett as preferred premier at 44% versus 38%. 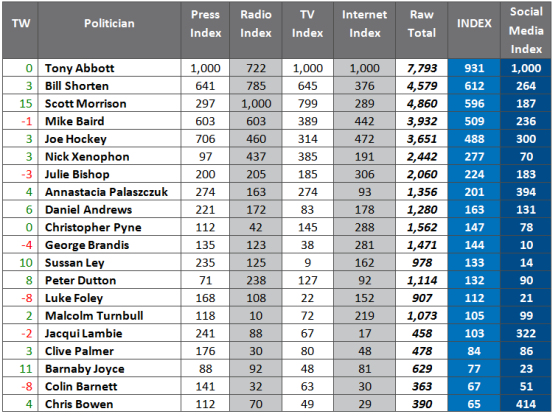 Talkback is picking up after this morning’s announcement of a national ice taskforce. Shadow Treasurer Chris Bowen comes a close second to the PM after supporting the removal of superannuation tax concessions for the wealthy.

The PM holds his place in social coverage while Treasurer Joe Hockey takes second as tax reform and the budget draw closer.

With Zayn leaving teen band One Direction, just how will the world go on? (Probably in the same direction, to be honest).