No fucks given. Older generations have warned youngsters that they should be wary of what they put on the internet, lest it come back to bite them in their later political careers, but it’s not just Gen Y who should be worried about their internet history. A tipster pointed us to the following comments made on libertarian group-blog Catallaxy Files by Liberal Democratic Senator David Leyonhjelm in 2011. The first is on a post announcing that the carbon tax had passed the lower house, in which Leyonhjelm calls former Prime Minister Julia Gillard a “mangy dog”:

Our tipster pointed out that Leyonhjelm “appears to hold atrocious views about women”, also linking us to this comment on a post about a breast cancer awareness day:

The username links through to the Liberal Democratic Party’s website, and the Senator has written guests post for the blog in recent years. We asked Leyonhjelm’s office if he had made the comments and if he stood by them, and received the following response:

So that answers that, then.

No Land Tax pedigree. We hear that the No Land Tax Party is now promising its workers that they will be paid on Friday of this week, but a tipster has pointed out that the party might have more connections than it lets on. In an interview with Radio National last week, party convener Peter Jones said there are “people with political pedigrees” from the Liberal Party involved with the party, but refused to name them. Know more? Fill us in.

Front pages. A tipster pointed out this happy coincidence from yesterday’s papers to us:

“I was amused by this juxtaposition of front page heads this morning, from The Australian:

And from The Age: 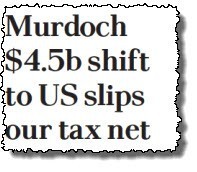 Both Google and News Corp will be facing the Senate Inquiry into corporate tax avoidance this week — we’ll be watching the news reports with interest.

Choose your message. It has been reported that the Prime Minister’s Office is further trying to control the PM’s message by hiring a staff photographer, but a tipster tells us the message wasn’t quite so clear over in Perth recently:

“The ceremony at Mt Lawley Primary Cchool in Perth, held to celebrate the rebuilding after a disastrous fire, was attended by Member for Perth Alannah McTiernan and Stirling MP Michael Keenan, the latter of whom had probably arranged the DVD message from Tony Abbott which was played. Unfortunately, the sound failed, so the audience was left to interpret his body language, no doubt a very ambiguous message.”

Phone tag. A tipster who was present at the Australian Medical Assocation’s roundtable on sexual harrassment in Canberra on Wednesday had this to say:

“Royal Australian College of Surgeons boss Michael Grigg has been playing with his phone the entire time. This is the same guy who responded the recent outcry in the Fairfax press by dening claims that sexual harassment and sexism were rife in surgery and saying the commentary was insulting to male surgeons. Way to show he’s taking the issue seriously.”

We put that to Grigg, who told us that as Wednesday would normally be a work day, he was responding to messages from patients and colleagues. He said “if anyone thinks I’m not taking this issue seriously they are crazy”. Grigg told Crikey the claim was “ridiculous”, and that addressing sexual harassment among surgeons “has dominated my life for 24 hours a day for three weeks”. He also pointed out the Royal College of Surgeons was spending “hundreds of millions” on a review into sexual harassment in the profession.

Happy news. Senator Penny Wong announced that she and her partner, Sophie Allouache, have welcomed their second daughter, Hannah, with this tweet: 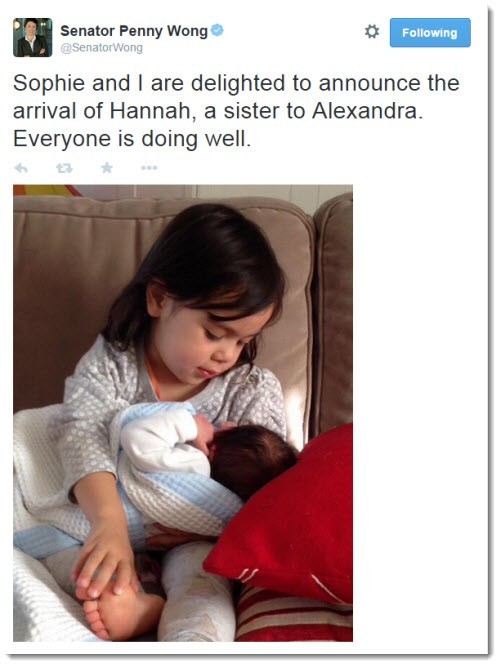 Have to say I admire Gavin Atkins’s style.

I really cannot understand why supposed freedom fighters spawned from Crikey’s loins constantly attack and belittle all who aren’t blue tie or red tie ..Are you all mind controlled, deluded or just plain crazy! Without independents in parliament the major parties would be making far more decisions that we all hated. Freedom robbing decisions by the way.