Rundle: UK election neck-and-neck, but UK itself on shaky ground

Both Labour and the Tories are ignoring a pretty big elephant in the room -- that the United Kingdom itself could be breaking up. 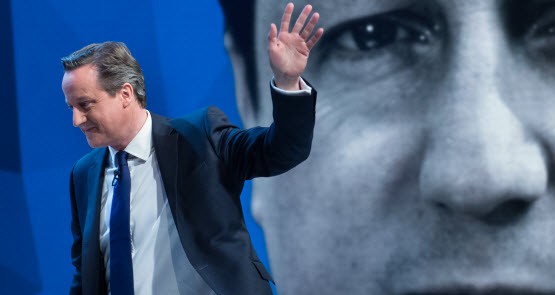 When the draw was done for last week’s leaders’ debate, Prime Minister David Cameron had his only piece of bad luck so far: he drew the podium on the far right of the screen, with Natalie Bennett of the Greens on the far Left, fnarr fnarr. Labour’s Ed Miliband got the centre spot, and there was a brief flurry of wagering on the possibility that he might sing a verse from Stuck in the Middle With You. It might have been a place from which to establish himself as a natural leader.

He didn’t, but it wasn’t his fault. Cameron had insisted on this format of debate and no other, and the broadcasters hadn’t had the nerve to “empty chair” him in a two- or three-way contest with Miliband and Nick Clegg. The thing was a farce, giving Cameron the chance to make it look as if he had other, better things to do, being PM and all, but would humour the others if they must …

Miliband got a couple of shots across the bows concerning the NHS (“you told the people there’d be no cuts! They trusted you!”), but he was also being assailed by the parties from the Left — the Greens not being as effective as they might, and the two leaders of the nationalist parties, Nicola Sturgeon of the SNP and Leanne Wood of Plaid Cymru, in a fetching updo and striking red top — and don’t blame me for mentioning it because the Cymru spin doctors obviously spent hours on it.

Sturgeon won it by most assessments, Cameron and Miliband didn’t lose, Bennett did, and UKIP leader Nigel Farage won and lost, because he harrumphed about people with HIV/AIDS coming in to get free NHS treatment. He was slapped down by Leanne Wood, but the pitch was clearly aimed at the UKIP who might be thinking of drifting back to the Tories. Nick Clegg ran, amazingly as an opposition leader, excoriating the leader of a government he’s been deputy PM of for five years. It must have taken all of Cameron’s patience not to say “Jesus, Nick, we’ve been practically gay married for five years, do you think you might have mentioned how terrible you found all these cuts then?”.

The whole thing was shadowboxing around two major issues, quite bizarrely. The first was that much of the claims for and against the Coalition “austerity” government couldn’t allow for the fact that there hasn’t been much austerity for three years. The Cameron-Clegg government simply abandoned it, and let the debt start to rack up again — to the point where it now stands at 1.2 trillion pounds. The UK’s much-vaunted recovery, pretty partial in any case, has come from abandoning real action on the deficit and debt.

But Ed Miliband can’t say that, or feels he can’t, because: a) it raises memories of the last years of the Labour government; b) it concedes that the government isn’t making cuts; and c) it focuses the public’s attention on the idea that recovery of a sort is occurring. It would take a masterful political type to play a double game with that material, and Labour has no one approaching that calibre.

The second issue that never emerged — and that no one sought to impose from the podiums (podii? podia?) — was foreign policy, despite the fact that two parties wanted to break up the UK, and a third wanted it to leave the European Union. The absence of the discussion was chilling in a way: the likely victory of the SNP in Scotland and their support of a Labour government would be two big steps towards a UK break-up. Everyone can feel that beneath their feet now, the ground is softly shaking. No one really wants to start talking about it because it is a change almost too large to contemplate — the nationalists don’t want to freak people out, and the big parties to countenance the fact that the place might soon be England wrapped around London, and possibly out of the EU. Indeed, both major parties have an interest in sticking to a simple script: Labour = social champions/irresponsible, Tories = growth-oriented/bastards.  They now have a shared interest against the minor parties. Win or lose the actual election, erosion of their core vote is as important a cause now, and it imposes contradictory strategic demands.

Exploiting this, someone in the “Scotland Office” — the Westminster department overseeing Scotland, even though it is ostensibly devolved (do you see why they want independence now?) — leaked a memo saying that SNP leader Nicola Sturgeon had said that she would prefer Cameron to win because it would make things better for the SNP. Sturgeon denied she had said that — though no one believes she doesn’t believe it — and the scandal was away and running, and labelled “Frenchgate”, which sounds disgusting.

Then the polls for the debate came in, and the results were: Cameron 22%, Miliband 21%, well within the error margin. It had made no difference to anything — except the fortunes of the SNP, which scarcely needed a fillip anyway. But it’s clear that Scotland, the place and the idea, has become the battleground, a challenge as much for Miliband as for Cameron, the site of a strange disjunction between the symbolic exchanges and the real process, changing now, the way we will live in 20, 50, 100 years’ time.

Podium would follow the language rule for words such as bacterium and colloquium. Their plural forms are ‘bacteria’ and ‘colloquia’. Thus the correct plural form of podium is podia (although podiums is acceptable).

It’s interesting to find [in a media outlet such as Crikey which purports to take politics seriously] their apparent need to prattle on about the plural of podium. Perhaps they do so to cater for their cliental? The first post after all was about this important question.
The article does, however, throw light on what can happen in Western Democracies when we end up with a smorgasbord of “issue” Parties splitting Parliaments into auction shops.

Meanwhile, over on BBC 2, they had the original – Coppélia?

Mr rundle seems determined to follow the failings of the UK press and fail to mention the fact that Nicola Sturgeon repeatedly mentioned the waste of money, 100 billion pounds, that is to be spent on upgrading Trident, a policy the SNP opposes. It is one of the reasons the SNP will make a virtual clean sweep of Scottish seats in the UK General Election.

The msm, like Crikey, acknowledge that Sturgeon won the debate with our actually saying what she said. For the record, she said, inter alia, that spending that sort of money on Trident was a scandal and an outrage when so many children were living in poverty.

That the UK’s possession of nuclear weapons could never be mentioned as having been debated is really deeply scary and a measure of how much the msm is in lockstep with the tweedledee and tweedledum of UK politics.

I have a friend living in Thanet, Farage’s would-be constituency. He tells me that polls are showing almost equal support for the Cons, Labs and UKIP, and if voting intentions don’t change, whoever wins will not be the choice of 2/3 of the electorate. That’s democracy?