The Global Mail seems gone for good. And other media tidbits of the day.

Remember the Labor Herald? The Labor Party’s “very own Crikey” has been on the lookout for an editor since this time last year. And it has finally found one. Kidspot editor-in-chief Alex Brooks will be the title’s founding editor, Telum has reported. The Labor Herald launches in July. — Myriam Robin

Up and up. Australia’s most expensive newspaper has jumped in price yet again. The Australian Financial Review now retails for $3.80 an issue — an 8.5% increase on Friday’s price of $3.50.

The price increase has prompted criticism from the Australian Newsagency Blog, which notes the price gross profit increase granted to newsagents stocking the Fin is only 2.5%, squeezing the margin they make on selling the Fin (a schedule of wholesale prices for the Fin can be seen here). “Fairfax is double dipping. They are increasing the cover price and reducing the margin permitted … This is an appalling move by Fairfax against small business newsagents. It’s unethical and socially irresponsible,” newsagent Mark Fletcher wrote, adding that a newsagent selling the Fin for $3.80 will make only $0.3636 from the sale.

In 2012, Fairfax lifted payments to newsagents by 10%, which it described as “the biggest single injection of funds — $3.5 million — into the newsagent network in many years.” — Myriam Robin

Great minds. The Daily Telegraph and the SMH had similar angles for their Prince Harry coverage this morning. We suspect this often happens to him … 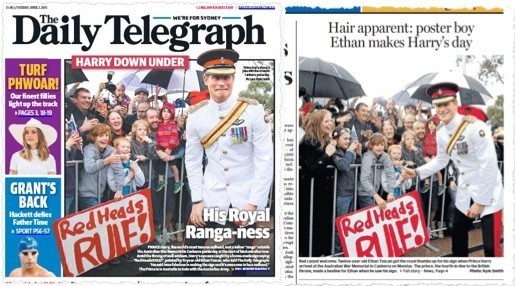 Without a trace. We’re not quite sure when this happened, but the archive of The Global Mail has been taken offline. When the website was closed in January 2014, the archive was still searchable, leaving a deep trove of both Australian and global investigative features available to read for free online. That has now ended — going to theglobalmail.org, you’ll be greeted with a message saying the domain is parked with Crazy Domains.

The Global Mail was Australia’s first philanthropically funded journalism outlet. Given $3 to $4 million guaranteed for five years by Wotif founder Graeme Wood, the site suffered an unexpected death when Wood pulled the funding early last year. At the time, the site’s management said it was exploring both commercial and philanthropic models to assure its continued existence. A year later, and nothing appears to have come of that. — Myriam Robin

Work for Lambie? Don’t say there’s no jobs in journalism … Jacqui Lambie is hiring a cartoonist.

Of course, Lambie has been pinged in the past for posting re-captioned David Pope cartoons to prove a political point. But with her own scribbler on staff, maybe she won’t need to do that anymore. She’s not the only politician to make her own media in recent years — Tony Abbott has his own photographer, and the Labor Herald launches in July. — Myriam Robin

Quoting their own in the Oz. Our old friend, Darren “Lurch” Davidson is up to his usual tricks in The Australian’s Media section on Monday when writing about the take-up of a new model being offered by Fairfax’s Domain real estate site to real estate agents. Dazza’s story acknowledged that Domain’s major competitor, REA Group, is majority-owned by News Corp, which publishes The Australian (final par of the story). But what Dazza failed to make clear was that the “real estate powerhouse, John McGrath” quoted in the story is also a director of Domain’s competitor, the partially News Corp-owned REA Group. — Glenn Dyer

Meanwhile at Ten … And in the “interesting” class among the usual dross in The Australian’s media gossip column, there was this paragraph:

“The sale of Ten Network to Foxtel/Discovery was on shaky ground, but now appears increasingly likely. With a revised structure, at 22 cents a share, or lower the takeover is looking good. Ten spokesman, Neil Shoebridge declined to comment on market speculation.”

I like the phrase “at 22 cents a share or lower”. Unique in the investment world, Ten is being sold by the Dutch auction method (when the price starts high and falls until the market is cleared or a reserve price is hit). The independent directors of Ten are allowing the price of Ten shares, already down heavily over the past couple of years, to be driven lower by an absurd takeover auction that is destroying value, not adding to it. The lower, the price the greater the benefit to Foxtel/Discovery (if it is really still a player), and the people who will be hurt are shareholders (who, it must be said, also include Lachlan Murdoch, with around 8.8%, along with James Packer with a similar amount, Gina Rinehart with around 10%, and Bruce Gordon, with just under 15%). How the Foxtel/Discovery deal will happen without Bruce Gordon’s say so remains to be seen. Ten shares closed at 20.5 cents last Thursday (before the Easter break). The “or lower” phrase in the Oz snippet seems to be what the market is signalling.

And not a word in the Oz Media section about the technical problems Foxtel (50% owned by News) is having with the rushed introduction of the IQ3 box. That’s not surprising. — Glenn Dyer

Netflix coming for Viacom. Falling viewing levels, weak ad revenues and high costs have forced the Sumner Redstone-controlled Viacom to slash asset values by US$785 million, or more than AUD$1 billion. The cuts, revealed in New York this morning, are the first major reaction by a media group to the fall in TV viewing levels for cable (pay) TV channels, thanks to what’s called “cord cutting” by previous video subscribers and the rapid growth of streaming video services, led by Netflix, as well as TV viewing on mobile devices.

Viacom said the write-downs were part of a strategic realignment that included layoffs and writing down the value of underperforming programming. As part of the moves, Viacom is crunching three of its domestic network groups into two new operations. Viacom is looking for annual cost savings of about US$350 million, up from an estimate a month ago of US$250 million when the company first hinted at a forthcoming revamp.

Viacom isn’t the only media giant to face the pain of the changing landscape for TV content viewing. The Murdoch clan’s 21st Century Fox has warned that its Fox TV operation faces revenue and earnings losses over the next 18 months because of a combination of weak programming, high costs and falling audiences who are changing their viewing habits. Analysts are also watching for what CBS, also controlled by Sumner Redstone (who is in his early 90s and therefore older than Rupert Murdoch) does. It remains the best-performing of the US free-to-air networks, but some of its programming is looking tired, and audience figures are dipping. Ad sales at next month’s upfronts in New York are projected to be up less than 2% and could fall for some of the networks. The upfronts last for a week to 10 days in New York and then in Los Angeles in follow-up screenings (which is when the Australian networks get to view new programs), and it is the time for the networks to present their fall (northern autumn) schedule with new and returning programs. Around 80% of the annual TV ad spend is negotiated around these upfront presentations. — Glenn Dyer

Golden Discovery. No wonder Discovery Communications has shilly-shallied in pursuing the Ten deal with Foxtel — there’s no money in it for Discovery management, especially CEO David Zaslav, who has just been revealed as pulling in a massive US$156.1 million (around A$205 million) for the company’s 2014 financial year –despite the relatively weak performance of Discovery shares in the year in sharemarket terms.

In determining his bonus, Discovery’s board said Zaslav achieved 96% of his quantitative goals and 95% of his qualitative ones. But were the huge sums and share awards fairly given? After all, Discovery’s share price fell 25.4% in 2014, when the Standard & Poor’s 500 rose 17.2%. A 42% underperformance is pretty good, isn’t it? Discovery’s revenues rose 13.2% to US$6.27 billion with net income up 6% to US$1.14 billion. The company underperformed in the market because US investors see pay TV companies like Discovery as being exposed to the rising threat of streaming video. Discovery has also moved deeper into global markets, especially in Europe, which means it will be increasingly exposed to the strong US dollar. And then there was the dabble in Australian TV, which has faded.  — Glenn Dyer

Video of the day. To tide you over until the real thing comes back next week (completely legally on Foxtel, of course), here is Sesame Street‘s take on Game of Thrones. Our favourite line: “The monster is blue and full of errors …” 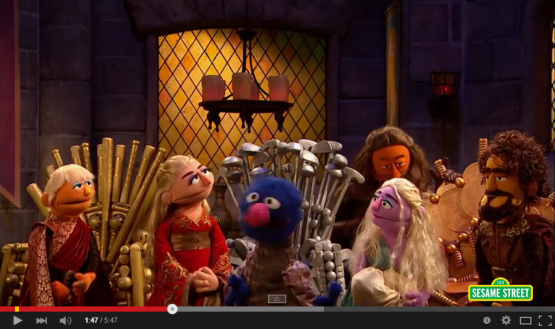 Can someone tell Myriam Robin that “it’s” always and only means “it is”.