Recent research concludes carbon emissions from walking are very large -- around the same as taking the bus and it’s mainly down to what we eat. As usual, it’s not that simple. 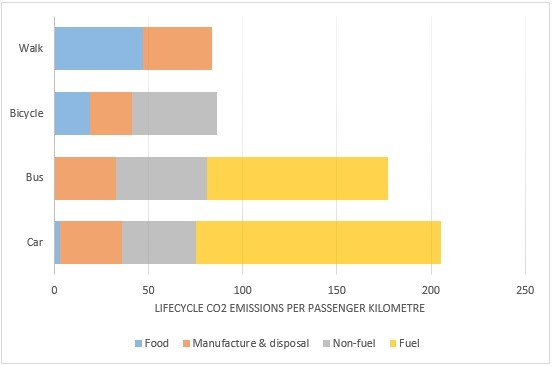 Life cycle GHG emissions by transport mode for the UK

According to recent research, some of the popular ideas about the relative carbon emissions from different transport modes are a far cry from reality.

The exhibit shows that, when assessed on a life-cycle basis, the emissions per passenger kilometre of travel by bus in the UK are 86% of those for travel by car. That’s mainly because of the low occupancy of buses, e.g. off-peak, counter flow. But probably more surprising is the finding that emissions from cycling and walking are around 40% of those for driving.

These numbers are from a recent paper by Aidan Duffy from the Dublin Institute of Technology, and Robert Crawford, from the University of Melbourne. It’s published in a respected, peer-reviewed journal, Transportation Research Part D: Transport and Environment.

The finding that worries me most is the contention that emissions from food eaten to sustain walking exceed those from the manufacture and disposal of cars!

The authors are right to point out that industrialised food production is a major and often overlooked generator of emissions. I’ve no reason to think there are serious flaws in their accounting methodology, and I note they seem to have avoided the usual mistake of assuming all energy for walking comes from carbon-intensive beef.

While Duffy and Crawford don’t make anything like the extreme claims of some, I think  the way their findings are interpreted and the significance they’re given nevertheless needs to take account of a couple of issues.

One is that, apart from athletes, most people don’t add extra food to their diet to compensate for an extra kilometre of walking. We eat for other reasons, like gratification or because we’re bored.

The growing problem of obesity attests to the psychological disconnect for many people between calories in and calories out. And of course those who eat nil or very little meat will generate many fewer grams of carbon than walkers and cyclists who consume the average European diet.

The other issue is that cars look relatively good because the comparison is on a per kilometre basis. The emissions associated with the manufacture and disposal of cars are averaged over thousands of kilometres annually, whereas the sort of trips where you could walk instead of drive might amount to hundreds of kilometres per year.

There’s an irony in cars looking relatively better as the number of kilometres of driving — and hence the consumption of fuel — increases! There’s a natural limit to walking, so pedestrians use local facilities and make fewer trips than drivers; the difference in the kilometres travelled by walkers compared to drivers is an order of magnitude, and so, therefore, are their emissions.

This is much the same logic as I discussed some years ago in relation to shaky comparisons between driving and public transport.

Yes, it’s very important to understand the emissions implications of diet; it’s not just down to how we travel and the spaces we live in. The issue is to change the way you eat as well as the way you travel. Walking and cycling are the way to go when it comes to reducing emissions.

The 20-minute neighbourhood: great idea but will never work