Educating Australians on war history can encourage us to be more reflective, provided it's done properly, writes Anzac historian Jo Hawkins of the University of Western Australia. 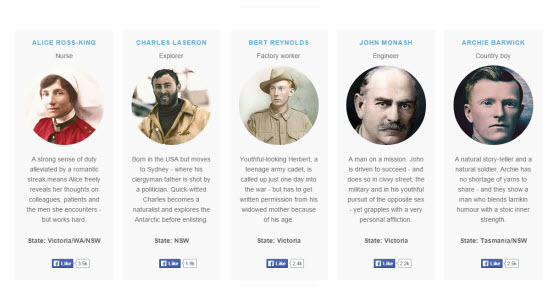 This year, Australians can do more than just remember the Gallipoli Campaign — they can re-live it. Two rival Australian media networks have resurrected long-dead Diggers to tweet “real time” updates of the campaign. No longer fighting for empire, the Anzacs have been enlisted to help media brands battle for social media dominance during the lead-up to Anzac Day.

News Corp’s AnzacLive encourages Australians to interact directly with 10 Diggers on Facebook, Twitter and Instagram. The Anzacs generally reply “in their own words”, with responses crafted from fragments of diaries and letters, a pursuit for authenticity that often results in a slightly unsettling, zombie-like tone. The Diggers themselves have been “branded” in a style evoking a reality TV show, with a cast of “characters” including an “unlikely ladies’ man”, a “tough joker” and a “dead-set Aussie legend”. News Corp has invested heavily in the project, which was planned and executed with the input of historians and involves a staff of 30 journalists over 12 months of planning.

Not to be outdone, ABC News has launched @ABCNews1915, which aggregates tweets from 60 Twitter accounts including Digger Thomas Drane (@TomDrane1915), nurse Alice Ross-King (@AliceRK_1915), prime minister Andrew Fisher (@AFisherPM_1915), and Turkish military commander Mustafa Ataturk (@MKAtaturk1915). The ambitious project is affiliated with the Australian War Memorial, National Library of Australia and Australian Museum of Democracy. In contrast to AnzacLive, the project is more concerned with creating a “real-time” narrative of the campaign based on first-hand accounts than encouraging interaction with historical “characters”. Tweets, which have been vetted by historians, are derived from an impressive range of sources including letters, diaries, Hansard reports and newspapers.

It’s not the first time that Australian media outlets have leveraged Anzac Day to boost their readership. From the 1990s, newspapers began to offer glossy historical lift-outs, commemorative coins and even free Anzac biscuits in an effort to increase circulation figures on Anzac Day. In the digital world, where content is king, attention is the only currency that matters. Anzac Day has been commodified, with letters, diaries and photographs transformed into online “content”, the commercial appeal of which will be measured by web analytics and assessed by digital-marketing teams.

Do these projects enrich our understanding of the Great War or do they trivialise and sanitise war memory for a popular audience?

The Facebook pages of AnzacLive Diggers have been used to generate traffic for related News Corp coverage. While some articles are informative, others, such as “Underbellydance: How a brush with the white slave trade sparked the first battle of the Anzacs” represent blatant clickbait. The staggeringly misleading article manages to rewrite the history of the “Battle of the Wazzir”, a shameful Anzac riot through Cairo involving looting, arson and violence, into “a bit of harmless larrikinism” at worst, and a heroic “rescue” at best — based on a single unverified source.

Indeed, News Corp has pulled out all stops to generate viral content, with colourised historic images, infographics, videos and a BuzzFeed-style quiz — “Find out who you’d have been in WW1“. The quiz assumes an enthusiastic willingness to enlist and matches readers with a Digger hero (conveniently sidestepping alternative roles such as conscientious objector or grieving mother). Granted, an alternative version, “Find out who you’d be after the Great War”, with results including “unemployed”, “disabled”, or “dead” is likely to have far less viral appeal.

In contrast, most tweets from @ABCNews1915 link directly back to the original historical source online, offering a gateway into Australian cultural institutions, and providing the first step on a journey of discovery rather than an end point.

Both projects claim to offer “uncensored” access to the thoughts and feelings of Aussie Diggers. However, primary sources, such as diaries and letters, require historical context and interpretation. For example, most personal diaries published for popular consumption during or directly after the Great War were exceedingly patriotic. Letters home from the front were often censored by the military, or by writers themselves in an effort to shield relatives at home from the horrors of war.

Whose voices are missing from the conversation? AnzacLive includes a female “character”, nurse Alice Ross-King, but prioritises those on the battlefield rather than the home front. Both projects risk overstating the role Australians played in the campaign, which involved troops from Britain, France, India and, of course, New Zealand (lest we forget).

In focusing on Gallipoli, the bungled military campaign-turned-bloody national baptism, tweets and Facebook status updates offer a partial glimpse of the Great War as a whole. “Real time” updates of Australia’s “glorious” entry to war risk evoking the furious imperial chest-beating of 1915, rather than the dark reality and tragic aftermath of a long war that divided Australia.

Nevertheless, there is no doubt that the ambitions of AnzacLive and @ABCNews1915 extend beyond simply increasing website traffic, interactivity and engagement. Social media can enable journalists and historians to connect with new audiences, promote a deeper critical engagement with the past, and enrich the understanding of Australian history.

Both projects have the potential to challenge Anzac mythology. For example, a recent @ABCNews1915 tweet from the diary of A.I.F private Sam Norris described how Australian and New Zealanders ransacked brothels and burnt furniture during the “Wazzir” riots.

By uncovering a range of conflicting views, social media has the potential to reveal the complexity of the wartime experience and encourage Australians to be more reflective. Furthermore, by encouraging readers to respond to posts, these platforms can create spaces where Australians can question, challenge and debate the Great War and the Anzac legend.

In fact, while both campaigns aspire to reveal ways in which the Diggers were “just like us”, they may inadvertently achieve the opposite, by exposing elements of the Anzac legend that are largely absent in the 21st century. Letters, diaries and newspaper reports from 1915 are likely to exult in the Anzacs’ fighting ability and reveal racial pride and a deep connection to the British Empire.

The diggers are talking but will anyone be listening? The failure of critically acclaimed Channel Nine miniseries Gallipoli to resonate with Australians, and an upcoming glut of arts events, television specials and documentaries have many within the “Anzac industry” concerned that Australians might have developed a bad case of “Anzac fatigue”.  Considering the significant investment into the medium, News Corp and ABC News will be hoping that social media can capture Australian imaginations.

“Both projects risk overstating the role Australians played in the campaign, which involved troops from Britain, France, India and, of course, New Zealand (lest we forget).” Well duh. It’s for Australian and by Australians. I’m sure the Brits & the Kiwis et al have enough wit to portray their own version of history?

Actually this whole 100th anniversary of Gallipoli thing makes me nauseous and also not a little angry. I just despise organizers of this shameless campaign along with vendors of t-shirts emblazoned with the words Camp Gallipoli such as I saw at Warringah Mall Target recently, and if sanctioned, supported, endorsed by the RSL and or the governments both State and Federal then collectively they should be deeply ashamed regardless of what they intend to use the funds for.
Memorial Services at a cenotaph are one thing – and I am an ex serviceman and believe strongly in this but this shameless cashing in is obscene.

Maybe people will see the modern parallel of Australians being sent to the Middle East by incompetent sycophantic politicians to kill and die on behalf of our colonialist masters, aided by an uncritical jingoistic media, for control of the region’s resources and politics… Some things never change

Luke at 4:16 – thanks for pointing out those parallels. It was remiss of me not to mention how much admiration I have of service men and women who – unlike myself – did see active service in either Afghanistan or Iraq or both places. And of course WW2, Korea, and other engagements. Considering their previous most recent deployments (not aginst ISIS/ISIL but Iraq), the fact that they were sent on the back of total willful incompetence at best, or a barefaced series of outright lies at worst adds fuel to my discontent. And most lately – this time against ISIS/ISIL, a situation created and enhanced by the previous militarism – they were sent off with a derisory pay offer (pay cut)! Quite unbelievable.

The whole business-and I use the word advisedly-has become grotesque. It was little Johnnie Howard who created the current wave of hysteria.

Australia was fighting for England when they fell for this three card trick. Now we fight in America’s wars. I will become a fanatic pro-Anzac day person on the day we actually stand up and fight for ourselves. But I won’t hold my breath.