Thanks but no thanks. Yesterday in what Crikey thought was an April Fools’ joke, we were contacted by the Commonwealth Attorney-General’s Department to ask if we’d like to run a story about the Australian Cybercrime Online Reporting Network and “and some of the cases we are seeing affecting businesses and individuals”. It begins:

“I am reaching out to Editors of relevant websites to enquire as to whether we can submit and article about the ACORN and some of the cases we are seeing affecting businesses and individuals.”

ACORN is “an online reporting tool that allows Australians to securely report incidents of cybercrime such as online scams, fraud and hacking,” we were told. Well, AGD, here’s our response. No. Why? 1. You used the phrase “reach out”, and nothing infuriates us more here at Crikey than the remorseless growth in that intensely annoying phrase. Journalists, editors and producers and comms people do not “reach out”, they “contact”, “ring”, “phone” or even “ask”. 2. You seriously want us to run an article from AGD on cybersecurity? Who has been campaigning for seven years to impose mass surveillance on Australians? You. Who wants to impose a scheme that will collect and store Australians’ most personal data in vast honeypots that will prove irresistible to hackers? You. And who did all this without a single scintilla of evidence that it would do what it was supposed to do? You. The single greatest threat to the online privacy and security of Australians is AGD itself. So no thanks.

Delays for Health Networks? The government’s Primary Health Networks, announced in last year’s budget, are due to take over from Medicare Locals across the country on July 1 this year, but we hear from a tipster that the process has been delayed due to resignations. We asked the Health Department about the delays and were told by a spokesperson:

“The Australian Government’s [sic] remains committed to Primary Health Networks commencing on 1 July. Successful PHN operators will be announced soon. Following the announcement of successful operators, contract negotiations will occur, followed by an establishment and transition period, with commencement of PHN operations on 1 July 2015.”

It has previously been indicated that successful tenders would be announced in March, but new reports say the announcement is due by the end of this month.

No Land no pay. The No Land Tax Party saga doesn’t look any closer to being over, with reports today that workers are considering suing the party if they don’t get paid for handing out how-to-vote cards at Saturday’s election. One worker shared yesterday’s email from convener Peter Jones with us, where he takes a new very polite line of communication:

“Please visit this secure website to provide us the necessary information for us to process your pay. Please do this as quickly as possible. The sooner you complete the form, the sooner you’ll be paid. We will commence payments next week.

“Please do not forward this email to anyone — because the link to the secure website is specific to you. If anyone else has access to it they will have access to your information — and they will be able to change your information. If you know of anyone who worked on the election — but who has not received this email – please ask them to visit www.electionwork.com.au tomorrow (Thursday) after 2pm. There will be instructions for them to follow.

“Once again, thank you for all your hard work and perseverance … and apologies for any inconvenience or distress.”

Our tipster didn’t share the link with us, but we hear from others that it wasn’t secure, and many workers are requesting to be paid by cheque. Jones has been less cordial in texts with workers, admitting he was an “arsehole” and blaming his son for the delay in the website being available. We’ll be watching electionwork.com.au this afternoon.

ATO needs IT help. We’ve been hearing from multiple tipsters about various problems with the Australian Taxation Office’s website for people trying to access the Tax Agent and Business Agent portals. It’s bad timing with a financial quarter ending at the end of March. We’ve put the call in to the ATO to ask why its website is crashing, but didn’t hear back by deadline.

Giving them the heave-ho. A caller to 6PR in Perth yesterday says there was a scheduling problem at the newly named Domain Stadium on Tuesday. The West Coast Eagles had booked the ground for a training run, but Fremantle also had the ground booked. Not for their players, but for the match day entertainment staff to do a test run of pre-match entertainment. Luckily the two groups decided they could work at the same time, meaning Eagles players trained to the strains of the Fremantle team song.

Poles and wires. A tipster who was left without power this morning kept his sense of humour, wondering if the blackout was the NSW government moving quickly on its election policies:

“The lights have gone out in Manly this morning. The electors of Manly thought that Premier Mike Baird had sold the poles in his electorate as there was 28,000 homes and business with no electricity this morning.”

We hear from Ausgrid that the power is back in Manly.

Unlikely allies. Earlier this week the US state of Indiana signed into law the Religious Freedom Restoration Act, which allows businesses to execute their “religious freedom” by discriminating in who they serve and don’t serve. An Indiana pizza shop has already said it won’t deliver pizza to same-sex wedding ceremonies (until now we hadn’t thought about having pizza at a wedding, but it seems like a great idea). There’s been a huge backlash to the law, and now some legislators are looking at writing an amendment to disallow discrimination based on sexuality. But of course, not everyone is happy with that, and one conservative radio host has been tweeting about the risks of legislators caving in to “Big Gay” … 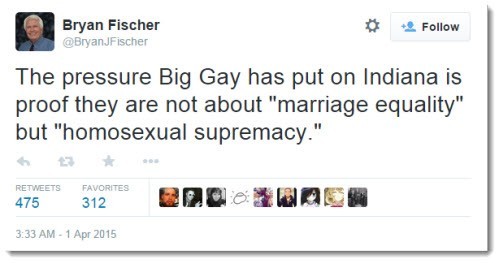 While Big Gay does sound like an excellent lobby group/gay bar, Bryan Fisher has actually done a huge favour to a business that doesn’t discriminate against its customers based on their sexuality. Big Gay is the name of an ice cream shop in New York, which has been enjoying the extra publicity. 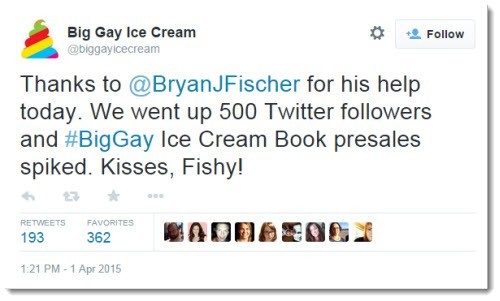 Find real sing mature into your local area to hook up with absolutely free.
No credit card or subscription needed. Just go to ( findmore.website ).

Dear god, they used “article” as a verb!