Mike Baird has moved his Liberal Party away from the hard Right, with a new cabinet of middle-of-the-roaders. 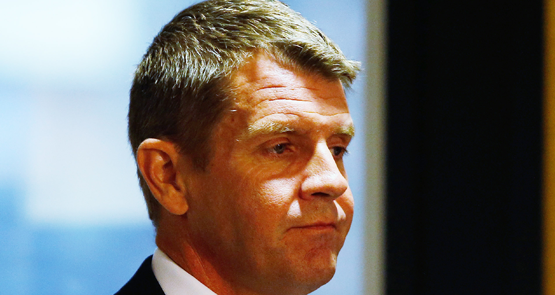 With his new cabinet sworn in today, NSW Premier Mike Baird has changed the political direction of the state Liberal Party and cast it as a party of the centre.

Right-wing dogmatists and ideologues have been ignored in favour of a group of ministers who are hands-on pragmatists, more interested in achieving results than factional supremacy.

Former premier Barry O’Farrell was taking the Liberals in that direction when he swept to power in 2011, but his leadership was always a balancing act between the hardline Right and the moderates.

In the process he managed to annoy both factions, and they were breathing down his neck when an undeclared gift of a bottle of Grange ended his premiership.

When Baird succeeded O’Farrell 12 months ago, he gave his first cabinet a generational makeover but not a factional one.

But now, having obtained his own mandate in a highly praised election campaign and demonstrated that there is “beef on Bambi Baird”, the 47-year-old premier has taken on the entrenched factions and moved to the middle ground. It is a bold flourish and one that most of his immediate predecessors were too timid to take.

While Prime Minister Tony Abbott is fashioning a quite different federal Liberal Party in Canberra that thrives on fear, division, conflict and devotion to the free market, Baird has decided to be neither dry nor wet but moist.

His new Treasurer and Minister for Industrial Relations is Gladys Berejiklian, a remarkable achiever whose work ethic is faultless. Her appointment will set off alarm bells in Treasury, which is inhabited by a cluster of conceited know-alls who have bluffed and bullied treasurers for decades.

Deputy Premier Troy Grant, Nationals Leader and a former police inspector, has taken the portfolios of Justice, Police, Arts and Racing. His principal task will be to install a successor in place of Police Commissioner Andrew Scipione, who leaves later this year.

The two high-profile contenders, Deputy Commissioner Catherine Burn and Deputy Commissioner Nick Kaldas, won’t be considered after their bitter rivalry became public at parliamentary hearings in February. Current front-runner is the third deputy commissioner Dave Hudson, nicknamed “Switzerland” because he is “neutral” on all the major issues plaguing the NSW police.

Gabrielle Upton has been promoted to Attorney-General, the first woman in that role in NSW, in place of Brad Hazzard, who has been shuffled off to cabinet’s most toxic portfolio, family and community services (DOCS).

McKay, a former Newcastle TV host, was approached to become a Liberal candidate before the 2007 election but accepted a counter offer from Labor heavyweights, who promised her a place in the ministry. She became a minister briefly but lost her Newcastle seat in the Coalition landslide of 2011.

Two vehement right-wingers, Jai Rowell and Matt Kean, have been excluded from the ministry, and Pru Goward has been relegated to take on the politically sensitive areas of mental health, medical research and the prevention of domestic violence and sexual assault.

Two National ministers have been axed, Katrina Hodgkinson and Kevin Humphries. Hodgkinson’s departure was not a surprise, but Humphries, a widely respected former headmaster from western NSW, was a talented minister with much political potential.

Baird and Grant appointed some of their backbench mavericks as parliamentary secretaries where the workload will keep them occupied rather than plotting.

Barring scandals and howling misjudements — always on the cards in NSW politics — the new cabinet has a shelf life of 18 months. Then it will be time for a “refresher” to establish a new team to fight the next state election in March 2019.

By then, Baird hopes to receive electoral endorsement for a third team based upon concrete achievements and mainstream values anchored in the political centre.

Labor and the Greens have been thrown a formidable political challenge.

My first reading of the headline was: “Maoist Mike Baird finds a middle ground with new cabinet”

Sadly that was not correct.

Find real singles absolutly free in your area.Go to ( findmore.website ).
No credit card no subscription just sign up and make fun tonight.

There was no mention of the soft right faction in your summary. What is join g on there???

Rob Stokes is not an environmental scientist. He’s a lawyer with a masters degree in environmental law. And there are plenty who will not miss Kevin Humphries in the water portfolio.

It’s got to be the first time I’ve heard Duncan Gay referred to as a proven performer. He’s a 1950s dinosaur determined to cover the city in concrete.