Jeremy Clarkson and the obsolescence of middle-class white men

Jeremy Clarkson once stood to mock the middle-class English culture he represented. But now has nothing left to say beyond “Believe me, I’m very important”. 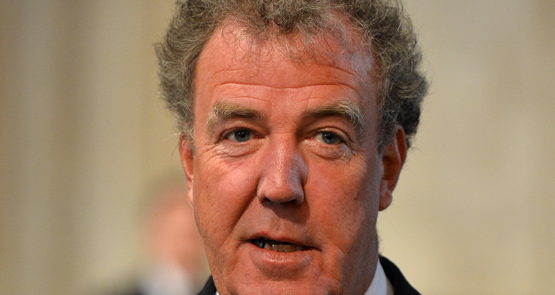 TV presenter Jeremy Clarkson, soon to tour Australia after a “controversial” delay, is really not much chop. This is not to say that the mediocre man whose broadcast persona was lifted from an imaginary chip shop in the last days of empire is powerfully evil. It’s more to suggest that his appeal is almost solely down to his act as a defender of a particular class of men. If Clarkson is at all interesting — and, intellectually, he really isn’t — it is as how a social species can monetise its own endangerment.

As far as automotive entertainment goes, Top Gear was, at one point, not too bad; not as good as Pimp My Ride but certainly better than Monster Truck Garage. But, of course, as everybody said at the peak of the program’s success, “it’s not about the cars!”. Clarkson’s charm was not so much fuelled by his knowledge of high-performance vehicles as it was by his irreverence. Just as his best mate A.A. Gill never really wrote centrally about food, Clarkson never really spoke centrally about cars. Both men were talking about themselves. And, of course, their dwindling cultural relevance as derisive grammar school twats, a decline that first served to amuse them, and us, and then became a source of anxiety and brought forth a salvo of unfunny racial slurs.

To be fair, there was a time that Gill, from whom Clarkson has received exacting tips on media performance, was very, very funny. “There’s only so much you can do for lasagne in the looks department. The only garnish that would improve it would be a power cut”, Gill wrote in the Times before copying the career of Christopher Hitchens, as Clarkson has tried to, and leaving behind the difficult work of making British newspaper readers laugh at the weakness of the bourgeoisie for the better-paid pastime of taking the piss out of the underclass for American glossies. With few exceptions, Englishmen of letters tend to lose their wit, and their socialist wisdom, in the Atlantic.

Clarkson never made the continental move entirely, but he certainly became, as Hitchens did, a prize fuckwit. As success encroached, so did his need to hang onto it. He built his persona on a self-awareness of life as a useless middle-class duffer. He has tried to sustain it by defending himself and his “rights” as a middle-class duffer. He’s now achieved the opposite of the thing that made him famous. Once, he asked us to laugh at the white, middle-class Englishman in all his endangered primacy. Now he demands that we respect him.

There’s more than a whiff of the white male victim about Clarkson, who has said vile things, which I elect not to amplify here. Whether these things are said to make a point, presumably about “censorship” and “political correctness”, or because he genuinely believes them is of no matter. The only thing that does matter is that Clarkson, for a brief period a refreshing presence, now offers us no more surprises than that other, nicer middling middle-class entertainer, Michael Palin. What he offers is a fear that power is disappearing from his grip, and that of his kind.

In his travel programs, Palin offers disgust masked as fascination. He holds these “other” countries up to the camera with a pair of friendly tongs, never any mention that these delightful and curious places are drowning in malnutrition and debt. Britain gave the world ironic detachment as surely as it did bad food and partitioning — a process that led, in large part, to the poverty Palin ignores. But, Palin, just a little older than Clarkson, can afford to continue the relaxed fantasy that he is an important man. Clarkson feels his importance slipping and abandons his ironic detachment in favour of just being an out-and-out prick.

When the powerful feel themselves failing, they do tend toward brutal, stupid acts. In recent years, Clarkson has revealed himself to be not only as frightened as a minor official of the British Raj in 1947 but also as a wit of only limited erudition. Like a Kyle Sandilands who has half-read the collected works of Auberon Waugh — and Richard Hammond in this scenario is the obsequious Jackie O — he shows us that the Empire has no clothes. Naked and empty of any inspiration save for his need to be loved, Clarkson is now doing less for the England of the historic imagination than the Beckhams.

Clarkson has nothing left to say beyond “Believe me, I’m very important”. His appearance and demeanour led us to believe for some years that there was something more than self-regard propping up the act. But there is even less left in him than there is in England and the 20th-century middle-class Englishman who falsely became a global symbol of erudition and restraint. He has become an angry, underdone bully wailing for his lost privilege. If he’s not careful, he’ll be crushed by a hybrid car.

I am glad I read the first par. Monetizing endangerment? Good grief.

This tripe is NOT why I subscribe to Crikey.

Why does Crikey print pretentious rubbish from Helen Razer. I do not like Jeremy Clarkson much but I recognize that a lot of other people do because he is funny and talks knowledgeably about cars.
Helen Razer does not know anything, she has no area of expertise so her views are not informed or interesting.

PS – bring back Dog on the Moon. What genius cartoon!

“he’ll be crushed by a hybrid car.”

I have a feeling he has much a cult following as Tesla is as a car or a company.
I also feel that as cult following of Tesla & Clarkson fade, there will still be more pressing problems than this article addresses. One of those are skills, men & women, white anglo celtic seem to lack. Brought about by failing families & poor education. I am afraid our whole society has some of the sins you point out AND personally I do not know what can be done about it. At least you and Clarkson have highlighted symbolically and emblematically that we have a big problems in our society around a lack of Anglo Celtic blokie bloke skills.

As white anglo celtic males decline, so do women as well. And I may add blokes are better skilled in these areas unless you want to go on about political correctness.

James May, Clarkson’s Top Gear sidekick observed recently that JC was “a knob”, which is a perfect precis for Razers comments.

I’m 58, a white male and drive a big V8. It’s not that I dislike the show, it’s just old and tired. Bit like Jeremy really.

Clarkson is the inheritor of long line of ‘God is an Englishman’ dictators pontificating more about the glory of themselves rather than the product they are paid to advance.
There is nothing unique with this stance-but it is tiresome.