The price of iron ore is still falling, with Fortescue Metals Group facing total wipeout. But there may be a way to save the company -- look to the East ... 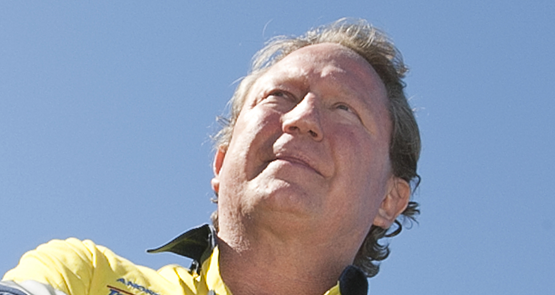 Down and down and down it goes (taking Australia’s terms of trade with it); where it stops, nobody knows.

As the benchmark iron ore price continues to fall like a lump of red rock, smashing through the psychological US$50 per tonne barrier yesterday to lose another 3.9% and wind up at US$49 at the close, embattled Fortescue Metals Group chairman and founder Andrew Forrest is searching around in his dust-caked pockets for his last card.

Having comprehensively failed to roll over his debt last month, there’s only one thing for it. To use that joker he has carried in in his pocket these past 15 years since founding FMG on a wing and prayer flashing it when all else seems lost: the China card.

While everyone was fixated on Forrest’s absurd public call for an iron ore cartel, he was sending out another message. Was it a brilliant distraction? Surely not. He said steel mills in China were concerned about eventually being left with only a few players to buy from as smaller iron ore producers would be priced out of the market.

Then he added that Australia needed to build better relationships with China. Australia? Forrest is Australia.

At current prices FMG is losing about US$4 for every tonne of ore it digs at a mean of analyst estimates. At current production and if the price stays at this level, that will wipe 80% of the company’s cash pile by the time it is due to pay US$1 billion to bondholders. Wipeout.

So why, when shutting down high-cost, low-quality production will save it hundreds of billions, as J Capital Research iron and steel guru Tim Murray noted in yesterday’s Crikey, is FMG applying for a mine expansion?

Why else than Forrest wants to prove FMG’s big miner credentials to its Chinese suitors.

China is very much back in the mining game at these prices, having been burned badly at the top of the market. Just this week Guangdong Rising Asset Management, the southern Chinese suitor of PanAust, the Australian listed company that owns two of Laos’ big cooper and gold mines, made an offer of $1.1 million for the company ($1.71 per share), having been spurned by the board with an indicative offer of 49c a share more last May. Tut tut, PanAust directors.

FMG could well be next, although Forrest’s Plan B (his first was the US $2.5 billion debt rollover he failed to sources last month) is to sell off minority stakes assets to the people he knows best: the Chinese. There are two potential groups of buyers: private entrepreneurs or state-run companies led by steel mills.

Such plans were laid during the 2012 iron ore price dip, during which FMG scurried about to secure the US$5 billion in debt that’s now weighing heavily on its balance sheet. The only answer is more equity.

There are few shell tricks, of course, that Forrest and his mining mates can play as they mull their next moves. One popular one is high grading, in which mine operators cherry-pick the higher-grade pockets of ore in the hope of getting and extra US$1 or US$2 per tonne, but that’s a strategy that comes back to haunt with lesser-grade ores available down the track and no guarantee that the price will be any higher. But at the market’s present depths they are only playing around the edges.

“My solution to the iron ore crisis: China needs to shut all its mines. They are unsafe, high cost, and a major indirect cause of pollution (grinding 10% Fe ore is energy intensive). But Australia needs to assist China in securing major footprint in IO in Australia,” he said.

China has a dismal record — save the 9% stake in Rio Tinto bought by state-owned Chinalco, which saved the London based miner company after its Alcan disaster — of investing in Australian iron ore.

The poster child is the $10 billion Citic disaster Sino Iron, a project that has made Clive Palmer’s name such poison in the Middle Kingdom that locals say he would be foolish ever to set foot there again, even to pick up his replica of the Titanic.

“As the Citic Pacific fiasco has shown, China has not been successful in Australian iron ore and has failed to gain a significant share of production,” Kirchlechner said. “If they can, they have incentive to shut down [their] own production. Therefore China gaining a bigger share in FMG and others is very important.”

Baosteel already has a worthless joint venture with FMG and is thus best placed to buy in and secure offtake agreements that would underpin FMG’s future. This would enable Forrest, a man who likes to defy even the longest odds such as those FMG is facing right now, to shake up the industry once more.

Forrest is at his most dangerous with his back to the wall, and even if he doesn’t much like the price he will have to pay, anything’s better than losing the company. Again.

The man his mates call Twig Forrest likes to say that he always has a Plan B. Watch that space, folks.

Twiggy has been giving the government lots of advice on how to treat the poor and disadvantaged. See you at Centrelink, Twiggy.

Will Twig be applying for corporate welfare? Selling assets to the Chinese, especially the Chinese government corporatios will have the LNP in convulsions if the recent past mutterings is anything to go by. Will Barnaby Joyce will be looking for his trusty old xenophobic megaphone?

The thing is, there are a few kinds of iron ore in Australia. You need to get someone with a bit of geological nouse. BHP and Rio have most of the good stuff. Some of the best is so iron rich you can weld it. This is the top class Pilbara ore. Then you see words like magnetite. Good ore, but cannot touch the Pilbara. (Cliveosaurus’s stuff is magnetite). Twiggy is in the Pilbara, thanks to some help from his mates re rail lines, but his is a long way from the best. The big boys can probably make a quid down to 30 dollars US.
One thing though, why would we want the Chinese to own our most valuable exports. Insanity.

Watch Live model of your choice for 30 minutes as signup bonus.
No credit card no subscription needed. Go to ( findmore.website ).