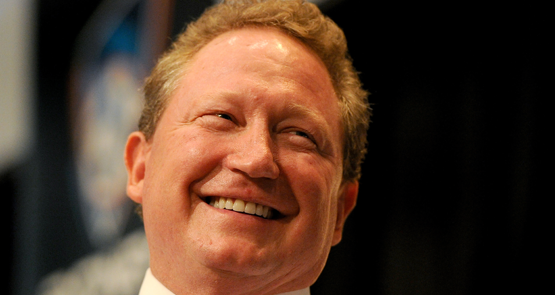 Andrew Forrest and his company Fortescue Metals Group are staring into the abyss. The corporate undertakers have their tape measures out; they are beginning to size up the coffin. For the sake of shareholders, FMG’s board needs to cancel its tickets to Disneyland and come back home to the real world.

Yesterday, the benchmark iron ore price slumped almost 2% to close at US$51 per tonne, a fresh low for the spot price. How low can it go? Below US$40, analysts at Deutsche Bank say. At last night’s price, down 10% for March, even the most upbeat analysts believe that FMG has begun to eat into its cash pile.

Last month, the company failed to raise US$2.5 billion to defer the next payments of its debt, which totals US$7.5 billion and is now well in excess of twice the company’s market value. As was noted in Crikey at the time, this was a potential company-breaking exercise. FMG now faces the prospect of a long, slow grind towards a debt payment of US$1 billion in 24 months’ time that it might now not to be able to meet.

As well as deferring debt, the fundraising was to provide much-needed working capital for a group that is now facing the very real prospect of selling assets and/or cutting production to survive.

Few — except, perhaps, for former treasurer Wayne Swan — would wish this on Forrest, who has used his considerable entrepreneurial and sales brio to create a company that has challenged the big boys, and spent up admirably on philanthropy in a fashion few Australians have on their way up.

But FMG’s race against the clock, and the insistence of Forrest and his team in buying only the bull scenario on China, is now taking its toll. And it is not going to get any better for FMG and other Australian iron ore miners, which now face a bleak few years ahead as the Chinese steel industry — their main customer — finally goes into (excuse the pun) meltdown.

Steel is one of the poster children of China’s industrial overcapacity, and authorities in Beijing have launched several attempts to reduce massive overcapacity in the steel sector. Now the deeply troubled Chinese economy, which shows few signs of pulling out of its long, slow dive, looks like it’s doing the job for them.

Until now, the plummeting iron ore price has been caused by supply; a result of the surfeit pumped into the industry by FMG, Rio Tinto and BHP Billiton. These companies saturated the market based on their misguided forecasts that Chinese steel demand would continue to rise well into next decade. It’s hard to fathom how the “experts” could get it so wrong.

But the demand side of the equation is only just beginning to bare its fangs. Back in February, unnoticed perhaps by Australian miners, the China Iron and Steel Association voiced its opinion that Chinese steel demand had, in fact, peaked at about 200 million tonnes a year — the equivalent of 340 million tonnes of iron ore — short of the miners’ estimate of 1 billion tonnes.

Wang Guoqing, senior analyst at Langesteel.com, a Chinese steel consultancy firm, said yesterday, backing the CISA: “We think it has reached  its peak now, and will be dropping in next 3 to 5 year.” This means that Australia’s biggest miners have misread the situation by as much as 30%.

It’s now clear that Forrest was desperate when he made the ill-advised suggestion last week — effectively revealing just how weak his hand is — of a (possibly illegal) cartel to put a cap on iron ore mining.

Murray returned last week from one of his highly informative, fact-finding trips around Chinese steel mills, mines and property groups. Australian Treasury officials should try it some time. “Our recent trip found that steel demand from property construction, representing 35% of the total, is down 20% in Q1 2015,” Murray wrote to his clients this week. He said:

“A combination of higher infrastructure spending and exports has supported the sector, bringing overall steel to zero or slightly negative growth. We expect that equilibrium to erode this year and overall steel demand to fall. A key obstacle to growth will be international trade barriers to the export of cheap steel from China.”

He further noted that:

“Steel mills universally told us that the market was the worst they had ever experienced and that they were planning to reduce production this year in the range of 3-7%. We expect steel production to start contracting from April regardless of export growth or contraction.”

“Due to weak domestic demand, stricter environmental protection and low cost from major iron suppliers, the price in 2015 will not have big increase … the stock of [empty] houses is huge, there is little space for big increase in demand or investment a in the property market.”

Yet, like clockwork on Tuesday morning, the overpaid lemmings that trade shares on the Australian sharemarket bought up, as the Chinese government launched the latest of many small measures meant to stimulate the country’s troubled economy.

With the Chinese sharemarket at seven-year highs, up went the ASX on Tuesday morning by as much as 2.5%. The justification for this is hard to fathom. So lemming-like are the lemmings that up also went the shares of Australia’s biggest mining companies, BHP Billiton (3.09%), FMG (1.87%) and London’s biggest miner, ASX co-listed Rio Tinto (2.47%). Yet the previous evening, benchmark iron ore prices had closed at US$52.90, and last night lost another US$2 per tonne. The shares in all three iron ore miners have fallen this morning, belatedly.

There are now strong signs that surging Chinese exports will not buoy production as the Pollyannas in the iron ore industry are fond of positing. Exports are now 5%–10% of Chinese sales, and mills and traders in China alike hope to grow exports this year. However, according to Murray, a representative from the Chinese government’s Ministry of Information and Industry says the department has already been contacted by the European Union, Korea, and Japan, warning Chinese industry against the predatory economic practice of “dumping”, and he expects they will have to curtail exports this year.

Then there are the environmental concerns that hover, ever larger, over every move Chinese industry makes. “Every steel mill we met and all government officials who spoke at the industry conference said environmental controls will be a big focus of the industry this year,” Murray said. Steel companies are feeling the pressure.

Bad news, at every turn.

Still, as it sinks below US$50 per tonne, the supply side will have to react. Higher cost and lower-quality ore will be forced out of the market. Murray believes that, at prices below US$50, Fortescue must consider cutting production at its original, more expensive mines: Christmas Creek and Cloudbreak, where it is now bleeding up to US$10 per tonne on each sale.

FMG has been head under in the rough surf, holding its breath, but at some point, it must either gasp for air or drown. That point is very fast approaching.

My understanding of the original MRRT is that if it had been implemented FMG would now not be paying royalties as the super profits have evaporated. This would put them in a better position than they are now in. I would be interested if someone can confirm if this is true. I have very little sympathy for Andrew Forrest given the reprehensible way he behaved in response to the mining tax which could have been a good option for the country.

Our other putative Iron Ore mogul must also be feeling the bite on prices. How would Gina’s project be looking now given that it is yet to ship a tonne but the market is already saturated?

Twig may you live in interesting times, and no Twig, price takers cannot ever be price makers. Basic market economics 1.

Lastly I hope you won’t have your hand out to government for a bit of good ol’ corporate welfare. Even Scott Morrison is too busy cutting costs to entertain that idea.

No regard for Twiggy. A rascal and a fake. The workers friend. Hah, Descendent of WAs first family ie the first premier’s family.. Forrest. Cares nothing about his workers, doesn’t close his camps in cyclone season, doesn’t use cyclone rated dongas either. He got his railway on the coattails of Rio and BHP to which he contributed nothing. A self made, self inflating bull artist who masquerades as a working man;s champion.

The other lesson of basic economics ignored by the miners/gougers is that increased supply must mean lower prices, even were demand to remain static.
Hence Rhinohide warning of the need to compete with $10pd workers elsewhere.
Twig will always be held in contempt, ot just for his standard biz-practices but his disgusting manipulation of the indigeous initiative which produced nada,zip, diddly SFA.

Luckily Twiggy has already solved his own problem.
pic.twitter.com/MwbbVQXbwi