Windy inquiry. Senator John Madigan’s Senate Inquiry into Wind Turbines rolled into Portland in Victoria’s far west on Monday, with senators hearing about the impact of investment uncertainty for local workers, as well as the many alleged health side-effects for people who live near wind turbines. It seems that pretty much any ailment for either human or animal can be attributed to wind turbines, with one speaker saying that it took him longer to complete Sudoku puzzles because of the wind farm, while another said that his kelpie could easily jump in to his ute away from the wind farm, but needed to be lifted in when near the wind farm. Throughout the day Madigan asked people about the effects of “wind syndrome”, which sounds like a condition that isn’t related to turbines at all, but not having enough fibre in your diet. A list of symptoms attributed to living near wind turbines has been collated by Professor Simon Chapman at the University of Sydney, and even though it has 244 items including social problems in peacocks, it seems that no one has attributed flatulence to wind turbines so far. So wind syndrome doesn’t actually involve any wind at all.

You want your own data? Pay up. Following the government passing laws that require telcos to retain our metadata for at least two years, Telstra has announced that its also making that metadata available to customers. That is, you can pay Telstra to access your own metadata. We’re curious to see how this will apply to business accounts — could your boss use this to check up on people on their company accounts? Here’s what the pricing schedule looks like: 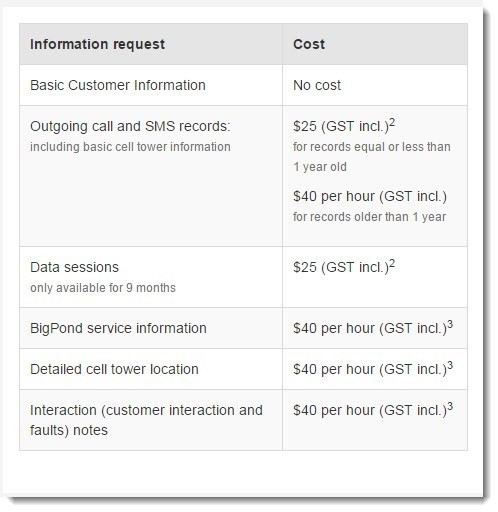 Beyond the pale for the Greens? We hear tensions in the NSW Greens about support for Sydney independent Alex Greenwich may go all the way to the top. A tipster told us that federal NSW Senator Lee Rhiannon could move to expel SA Senator Sarah Hanson-Young from the party because of Hanson-Young’s support for Greenwich over the Greens’ own candidate for the seat of Sydney, but Rhiannon denied the allegation, labelling it “really crazy stuff”. The source also said Hanson-Young “has been talking about leaving the Greens after failing to get more than one vote in her attempts to become Deputy leader and Party Room Chair” and was planning on joining Malcolm Fraser’s new party: “[She] was set to announce her departure from the Greens when Fraser fell ill,” said our source. A spokesperson for Hanson-Young told us it was “absurd” that Hanson-Young would be considering leaving the party. Watch this space.

Virtual Wolf of Wall Street. While many people across the country are sweating over who’s in and out of their SuperCoach team ahead of tomorrow’s AFL season opener, over at Business Spectator, they’ve turned the fantasy league format to the sharemarket. Offering $15,000 in prizes, “SuperTrader” competitors are invited to trade imaginary stocks for the chance to win real money. We’re not sure if real stock brokers are allowed to play. 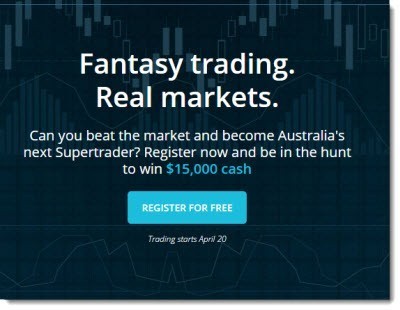 SBS rumour mill in overdrive. Working in an organisation that’s suffered its fair share of leaks in recent months, why on earth would the executive producer of SBS World News think he could get away with telling reporters to air fewer complex, unhappy stories in the lead-up to 7pm, when viewers switch to the ABC? One rumour doing the rounds at SBS is that Andrew Clark wrote the email with the hope it would be leaked — to divulge SBS’ dire straits.

SBS is currently pushing as hard as it can to encourage the Senate crossbench to pass an ad-averaging bill to allow it to air more ads in prime time. If the measure fails, SBS will be left with a budget hole and will likely have to start cutting jobs and programs — but Crikey understands the crossbench is sceptical of the government bill. Sending an email sure to be leaked could be a way of sending a message — that SBS needs more money, stat.

But would an EP go as far as to hope his own staff leaked his email? Our truthiness-o-meter says probably not. And besides, as we revealed yesterday, SBS staff have been told not to leak at all, or risk investigation.

Further adventures of Freedom Boy: Freedom Boy went to a conference organised by the Centre for Independent Studies, and they gave him a branded sweater, although the brand is, for some reason, a line portrait of Senator David Leyonhjelm. With this tweet, Freedom Boy has now declared it. The donors to the CIS, and similar groups such as the IPA remain, sadly, mostly undeclared, so we don’t know who is paying them to spruik small government, sorry, Freedom! Nifty! 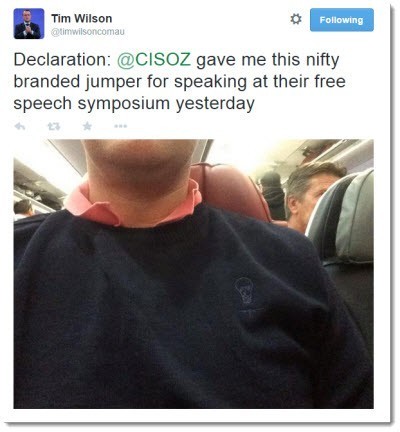 Reversing the tabloid trend. With newspapers getting smaller across the world, it’s a brave paper that seeks to reverse the trend. Can the rumours be true that the West Australian is experimenting with size expansion, not merely to a broadsheet, but to the rare “double elephant” folio — approximately 122 cm high by 80 cm wide? The resulting publication would be about four times larger than a broadsheet. Sources say that design tests are underway, and that wind-tunnel tests have been done to check drag co-efficient. “We may have to punch holes in each copy to stop being people being pulled into the ocean, but it’s worth it for the white space,” an insider told us. “White space is what Perth is all about.”

‘I’ve been lied to’: Greens see red over party’s PDA for Sydney independent

Is the last item an April Fools joke?

Simon – it has to be coz I can’t find BK’s flagpole one anywhere.
BTW can someone tell me what a GIF is, as in ‘cat GIF’?