Ten shares are down once more. And other media tidbits of the day.

What do you do? For dozens of media outlets in Australia, that’s so hot a story it’s worth breaking the embargo over. As BuzzFeed has reported, several outlets from Pedestrian to Channel Nine to The Chronicle thought that particular story was too hot to wait a day for the embargo to lapse.

Before so many broke the embargo, a Fairfax scribe passed on the release, telling us the newsroom was quite annoyed at public relations agency One Green Bean for what was seen at Fairfax as an obvious hoax. “It’s just bad practise for PRs, who’ve now just lost support from reporters,” the scribe told Crikey. Of course, it’s hard to feel for journalists fooled by a press release on March 31 when many do the exact same to their readers a mere day later. But it is a risky tactic for PRs, who often have a fractious relationship with journalists by default … — Myriam Robin

Drawing within the lines. A tricky day for the AFL’s media department yesterday, with the AFL’s anti-doping tribunal ruling on whether 34 Essendon players had been found guilty of doping. All players were cleared, as almost every website interested in the affair was reporting just after 2pm yesterday. But the hearing was closed to the public — outlets were relying on inside word to get the result a little bit before an official statement was made. But not AFL Media, which seemed to handle the issue by acting more cautiously than anyone else.

“Reports suggest all 34 players have been cleared. We’re awaiting official confirmation,” AFL Media’s liveblog stated at 2.10pm, when everyone had the result splashed on their front pages. On Twitter, AFL Media staffers said this showed they were independent from the AFL.

The issue was prominently covered on the AFL’s website this morning. The coverage included a report on ASADA CEO Ben McDevitt who slammed Essendon’s supplements program. Rival football reporters have complained in the past about the supposedly greater access sometimes given to AFL Media’s journalists in covering the sport. But, on this issue, AFL Media seems to be playing it safe. — Myriam Robin

Ten’s final woes, Seven fears? Ten shares are sinking, again. After hitting a high of 24 cents on March 3, the shares have sunk to 20.5 cents yesterday, a fall of 14.5 cents (including 2.4% yesterday in a market that ended higher). Will this be a terminal state, or will they fall towards the 16-cent level where the next group of bottom-feeders who want to “help” the network, are gathered, waiting? But then what’s happening to Kerry Stokes’ Seven West Media — after falling to an all-time low of around $1.21 earlier this year, the shares charged higher to $1.61 in the wake of the interim result, and some encouraging words from Stokes about the outlook. But the shares have also developed a list, down 16.7%, or 27 cents to $1.34 yesterday. Blame Netflix, blame weak revenue growth, or blame rising market worries about those convertible shares we first told you about in February, the $250 million or so that will stop Seven paying dividends in a year’s time if their conversion isn’t sorted out. And Fairfax yesterday (95.5 cents, up 2.1%) has ruled out spinning off its Domain real estate business, which most of its shareholders want to see. It’s a tough ask for Fairfax as Domain is, after all, the only part of Fairfax keeping the market interested in the stock. — Glenn Dyer

Believe it or not. Live light entertainment is making a comeback on US TV for the very prosaic reason that it is almost impossible to ad skip. NBC has already broadcast live productions of The Sound of Music in 2013 (which grabbed 13 million viewers) and Peter Pan late last year, which was watched by more than 9 million viewers. Now it has decided to do a live production (in partnership with Cirque du Soleil) of the 1975 musical, The Wiz. The cast hasn’t been announced, but it will air in the US on December 3. Soon after that announcement became public, Fox let it be known that it has scheduled a live production of Grease for January 31, 2016. The broadcasts of Peter Pan and The Sound of Music revealed (in industry analysis) viewer resistance to time-shifted recording and viewing (which is becoming a bigger and bigger part of TV viewing in the US — either of three or seven days. Live broadcasts of musicals (and perhaps other programs) are also hard for the streaming-video sector to match (Netflix the musical?). This trend takes us back to the 1940s and 1950s when live plays, soaps, and dramas were the daily staples of US network TV. — Glenn Dyer

Ratings tricks and tips. The US TV industry has been stunned by an outlandish ratings rort pulled by the under-pressure NBC Network to try and keep its struggling Nighty News (sans the truth-challenged host, Bryan Williams, who is on six-months suspension) ahead of its rival news broadcasts, especially ABC’s World News Tonight. To keep the Nighty News audience figures above those for World News Tonight, NBC added in the viewing figures for repeats of the news broadcast in the early morning on some of its network and affiliate stations across the US. US media website Deadline reckons that added 70,000 viewers at most. NBC and Nielsen, the ratings group, haven’t broken down the audience data for the Nightly News since NBC started the rort last week. Deadline says the trick was knocked on the head when major advertisers pulled their ads from the regional repeats, forcing Nielsen to stop adding the audience data because it only rates programs with national ads in them (there are separate regional ratings in the US run with a lower frequency). In any case, NBC’s Nightly News looks like notching up its lowest audience figures since 2013. And why did NBC do this? Well, two weeks ago, ABC’s World News Tonight was all set to celebrate beating NBC’s Nightly News for the first time in over five years (285 weeks according to Deadline), until NBC pulled its trick with the repeats. Other websites say that ABC’s news was leading NBC’s news by around 29,000 viewers, until NBC pulled the swifty, which pushed it in front by 11,000 viewers. You can bet there were lots of chuckles at 30 Rock at that one! — Glenn Dyer

Front page of the day. The Indianapolis Star with a stark message on religious freedom laws, which allow discrimination against LGBTI people … 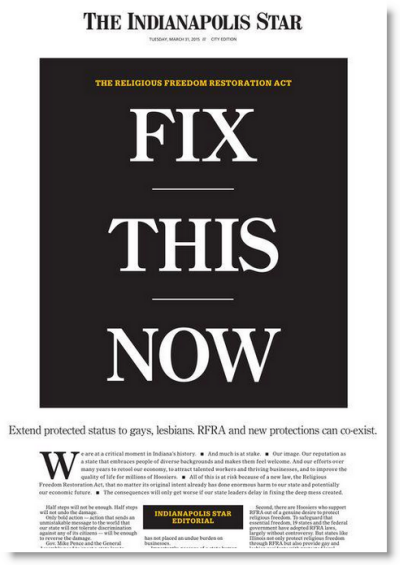 Find real sing mature into your local area to hook up with absolutely free.
No credit card or subscription needed. Just go to ( findmore.website ).