April Fools: the best and the worst

Oh god, Bill Shorten thought it was time to bust out some zingers ... Crikey journalist Sally Whyte and intern Emer McCarthy find the best and the worst of April Fools' Day jokes.

It’s that time of the year again, where we read every headline with suspicion (well, more than usual) and open every press release warily. Media outlets, brands and politicians all got in on the April Fools’ Day laughs this year (as did we, have you found it yet?), and we present the best and the worst:

Australian Sex Party. The Australian Sex Party announced that it would be joining forces with the Shooters and Fishers Party to form a new party called “the Sex Pistols”. In the statement Fiona Patten is quoted saying: “This is an awesome move for both our parties — and everyone who loves guns and sex, although we don’t recommend using them together.”

Perth Proshers. April Fools’ Day seems to coincide with Prosh Day for Perth University students, who released a newspaper full of joke articles, including this one: 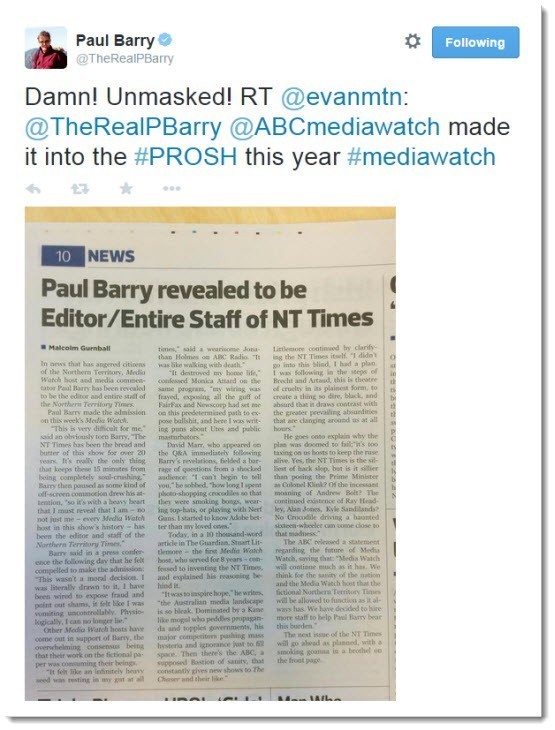 NT News. The NT News‘ own tweets were more disturbing than the report that Paul Barry would be the editor, announcing an end to stories about crocs and tweets in all caps. It hits a bit too close to home to be funny. 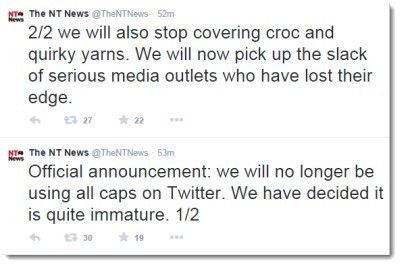 ABC rural. The ABC’s rural reporters were in top form today, with two stellar efforts. Our favourite is “Cattle ear tags offer unique solution to improve outback internet coverage“, which sounds like something the CSIRO and NBN Co should start work on immediately, and “Government looks to make money from turkey droving in national parks“, which many social media users gobbled up without question.

Other highlights. Chris Kenny tweeted his support for Julian Burnside and Mike Carlton to be put on the ABC board, and Google Maps offered a Pacman version of the site. Our very own Bernard Keane also hoisted some readers along with his flagpole story (and congratulations to Jonathan Kenny, who spotted the CAT GIF therein).

Bill Shorten. The Opposition Leader used the morning to have a go at Tony Abbott’s preference for raw onions. It’s about as zinger-filled as you’d expect. 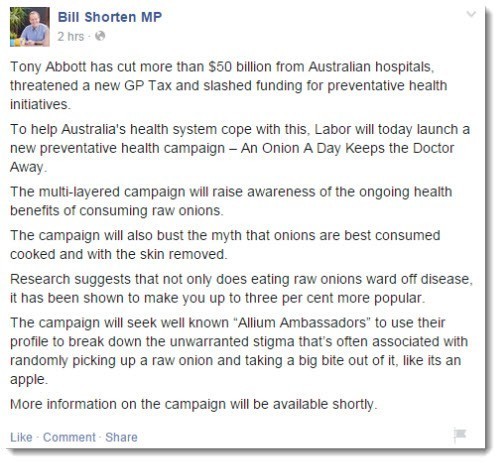 One of the top comments says “This April Fools is legitimately the most detailed policy statement you’ve ever put forward”. Burn.

Vegemite. The website Pedestrian.tv not only fell for Vegemite’s press release announcing a giant jar of the condiment would be constructed in Melbourne, but broke its embargo, publishing the story yesterday.

Other jokes that don’t quite hit the mark include: Kyle pranking his co-host Jackie O with the help of a pregnant colleague, Flight Centre’s cargo class seats at only $199 to London return,  heartbroken teens hurt even further today with reports of Zayn returning to One Direction proving to be cruel, cruel lies, Contiki announcing plans to increase the age limit on tours from 35 to 65, Asos Australia introducing a “game changing” clip-on man bun and Deakin University reporting that its cube building had been stolen and was last spotted on the Princes Highway.

The prize for the best effort goes to http://www.theguardian.com/media/2015/apr/01/jeremy-clarkson-joins-guardian-drive-for-fossil-fuel-divestment

Perth university? News to me

Are you much bored?? Go to ( findmore.website )
and find active singles in your area to hook up with and have fun tonight.
No credit card no subscription just sign up free and Watch live models in action or find some for dating
or for relationship whatever you prefer.