What the art world will lose with Aboriginal community closures

Tony Abbott says Australia needs to stop subsidising the "lifestyle choices" of remote indigenous communities. Art writer and critic Susan McCulloch looks at what that would mean for Aboriginal art. 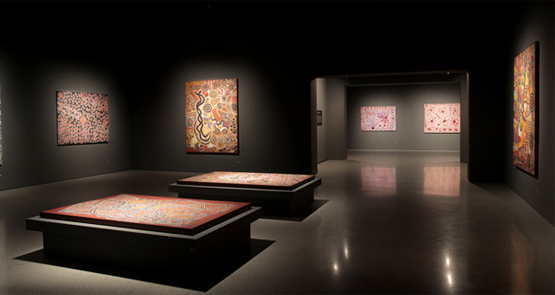 The manager of one of Australia’s largest and most prestigious Aboriginal art centres has said it would be “unimaginable” if one of the small homeland communities his art centre represents were to close.

Paul Sweeney is manager of the Aboriginal-owned Papunya Tula Artists Pty Ltd., established by artists of the seminal Papunya painting school in 1972. It currently comprises 49 traditional-owner artist-shareholder members and represents some 120 artists from largely two western-desert homeland communities, Kintore and Kiwirrkurra, along with those from a number of smaller outstations.

On Wednesday, the ABC released a leaked 2010 federal government report into 287 remote Western Australian communities that named Kiwirrkurra along with 191 other communities as being in the lowest category of economic sustainability. Headed  “Priority Investment Communities — WA”, the 287 communities were categorised into three grades of viability. The lowest was a C grade, in which “constraints to sustainable development and opportunities for future growth are limited” and in which “[i]nvestments will be limited to sustaining existing assets and services”.

The WA government has maintained that it can’t release the names of the up to 150 communities it stated last year needed to be closed, as it has no framework in place for deciding which these would be. However, according to the ABC, the “Priority Investment” report conducted in 2010 by the federal government was delivered to the WA government in 2011 and provides such a framework.

Western Australia’s Minister for Aboriginal Affairs Peter Collier was quick to respond following this week’s release of the report, saying that just because communities were divided into three categories of economic sustainability in 2010, this does not necessarily mean that those in the lowest category are to be those closed. ‘There will be a full process of consultation before any decision was made to close communities,” he said.  “There’s a lot of uncertainty out there — angst — I can understand that, I really can appreciate that. And it is absolutely imperative that they [the communities] are a part of the decision-making process.”

Kiwirrkurra, some 700 kilometres west of Alice Springs, was established by the Pintupi forebears of its current residents in 1984. Approximately half of Papunya Tula’s most celebrated and “key” artists live at the small community, including the award-winning artist Yinarupa Nangala, the internationally exhibited artists Yukultji Napangati, Bobby West Tjupurrula, Joseph Jurra Tjapaltjarri, Patrick Tjungurrayi, Warlimpirrnga Tjapaltjarri and many others.

“Over the last five years, the company [Papunya Tula Ltd] has put more than $ 1million from sales of art into new buildings at Kiwirrkurra, including $800,000 for a new artists’ studio and $200,000 plus for a transportable house,” said Sweeney. “We’ve just made a donation of $98,000 to the Western Desert’s mobile dialysis unit, the Purple Truck and are about to launch a trust fund in Melbourne with the Purple Truck, the Business Council of Australia and Australian Unity. A new clinic has also recently been opened in the community.”

“I don’t see how Kiwirrkurra could be deemed as ‘unsustainable’ with all of that and more going on — but if it were, and its services withdrawn, it would be catastrophic for the artists and for the future of Papunya Tula.”

In 2012, senior Aboriginal elder, Kiwirrkurra resident and former Papunya Tula chair Bobby West Tjupurrula strongly criticised the then-imminent shut down of the federal government’s Community Development Employment Project (CDEP), saying more community members would be forced to go on welfare with Centrelink and that he “couldn’t understand why the government would want that”.

“Centrelink will make people lazy and bit by bit they will start to leave,” he said. “If it [CDEP] finishes, people will go to Alice Springs to Port Hedland and go on the dole and they’ll have nothing. What about our community, everyone depends on it, we were happy and working together for a long time.” Art remains one of the most important economic and cultural activities at Kiwirrkurra.

Like Sweeney, the art centre manager of one of the other communities that received a category-C rating in the 2010 report was also surprised to hear that her community was on the list. Amanda Dent, who, with her partner Brian Hallett, has been a long-time remote community and arts worker — including founding manager of several highly significant art centres in the Pitjantjatjara lands of SA and WA — is currently the manager of Spinifex Arts Project based at Tjuntjuntjara, WA. She said the community administrator was aware of the 2010 report, however there had been many improvements at the community since.

“Tjuntjuntjara’s a wonderful community — one of the happiest and most peaceful I’ve worked in,” said Dent. “People in cohesive communities are happy — they’re confident and they have self esteem as they know exactly who they are and where they’re from. It’s family group, so while there are the usual intrafamily dynamics there are solutions for resolution. Once you start mixing up groups in bigger places, problems get so much worse — it all requires much more management and often leads to huge community disharmony. The terrible issues get worse and more services are needed to cope.”

Read the rest at Daily Review