Reformers, overlook fairness in tax at your peril

If reformers overlook the importance of fairness in taxation, they'll end up further undermining already fragile voter confidence in our tax system. 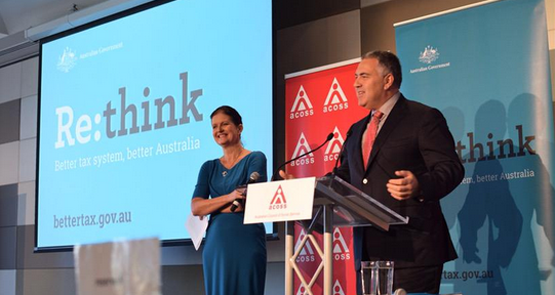 Fairness is important, Treasury says in its tax white paper (titled Re:think — we can only hope no taxpayer dollars were wasted on some coke-snorting ad exec coming up with that clanger). “Fairness is an important consideration for widespread acceptance and sustainability of the tax system,” it said. Moreover, “confidence in the tax system can be eroded when people think others are not paying their fair share of tax”.

Indeed, right around the world, governments understand that tax systems need to be seen to be fair in order to maximise compliance with them.

Fairness, of course, is a subjective assessment beyond a certain point. “Most people consider that high-income earners should pay more tax than lower-income earners, both in dollar and percentage terms,” the paper correctly notes. What it doesn’t point out is that people’s estimation of what a high income is tends to go up with their own incomes — a person earning $100,000 a year might regard another on $150,000 as a high-income earner while they themselves are struggling to make ends meet, but roll forward five years and if that same person were now earning $150,000, chances are they wouldn’t regard themselves as a high-income earner. “I don’t feel rich,” they’d say. Meantime, the struggling worker on $50,000 could only dream of earning that kind of income.

There are also different kinds of fairness when it comes to tax. The kind we tend to think about is distributional fairness, i.e. does the burden of taxation fall in a fair way across the community? But there’s also procedural fairness — does the system itself treat taxpayers fairly? Both types of fairness are important in preserving confidence in the tax system — taxpayers won’t have faith in a system in which they don’t think authorities will treat them fairly. And the two kinds of fairness interact, as well — taxpayers won’t have faith in a system in which they believe authorities go easier on the big end of town than on those who have fewer resources to defend themselves (Dr Gregory Rawlings, then of the ANU, wrote a paper on these issues a decade ago).

“To reinforce the problem, the latest polling from Essential Research demonstrates that voters don’t want multinationals to pay less tax, they want them to pay more.”

But fairness is a significant problem for the tax white paper: without being too explicit, in essence it proposes that we tax companies and particularly multinationals less, and individuals (especially via a higher GST) more, because that will be more economically efficient (that is, less distortionary, and with less dead-weight losses). Its rationale is that reducing corporate tax will increase investment and jobs, and that (again, by implication) it’s all too damn hard to tax multinationals properly. Peter Martin explores this perceived tension between efficiency and fairness in a good piece today.

To reinforce the problem, the latest polling from Essential Research demonstrates that voters don’t want multinationals to pay less tax, they want them to pay more — 76% of voters want to force multinational companies to pay a minimum tax rate on Australian earnings, and it doesn’t matter if voters are Liberal or Labor, young or old, male or female — they tend to agree.

It’s true that this sort of result partly reflects that voters see taxing corporations as a victimless crime — they themselves aren’t companies, and they don’t make a connection between heavier taxation of companies and less investment and fewer jobs. Indeed, two weeks ago, Essential reported that 60% of voters believe forcing multinationals to pay more tax would be good for the economy, not, as Treasury suggests, bad.

But it also reflects how important fairness is when it comes to tax: voters know how extensively the world’s biggest companies rort the rules around taxation and shift money between countries to minimise their tax. Policymakers might think that fairness is a subjective assessment, but in a democracy, fairness in practical terms is whatever the majority of voters think it is, and that’s why the tension between efficiency and fairness is a big problem for tax reform. To suggest that the only response to multinational tax avoidance is to leave it to the G20 and, hey, maybe just not tax them as much in the first place is to undermine the possibility of effective reform right from the outset, which is why Treasury’s surrender on this issue is so profoundly irresponsible.

It’s also why Labor has lifted its cone of policy silence to commit to stronger rules for multinationals, because it senses how vulnerable the Coalition is on this issue. Joe Hockey has spoken a lot about reducing multinational tax avoidance but has so far failed to produce the goods and even backtracked in some key areas. Indeed, with its absurd decision to let private companies off the hook on tax transparency, this government looks more like the tax-dodger’s friend than its implacable foe.

A sensible approach to tax reform would do more than just pay lip service to fairness or argue — vaguely — that, hey, it’s kinda fair in the long run because we’ll all be better off to cut corporate tax — an argument that in any event will never convince voters who only see vast corporate profits. To achieve buy-in from voters, policymakers have to improve perceptions of the fairness of the existing system, including by forcing multinationals to pay significantly more tax here than they do now.

Otherwise, tax reform will simply end up further undermining confidence in the fairness of the tax system, with dire implications for revenue in the future.

I must have missed something in Capitalism 101. I thought that higher profits (from reduced taxation or any other source) usually resulted in higher dividends to shareholders, rather than more jobs or (heaven forbid!) higher salaries to workers?

Isn’t the whole point of capitalism to maximise profits (to shareholders) and minimise costs (including labour costs)?

So how will the average Australian be better off if multinationals pay less tax?

Personally, I would be interested to see some modelling of tax brackets aligned to multiples of median income.

Takes care of the bracket creep problem as well.

I think that multinational practice is rather to capture as much value and power as possible for the board and senior management, with a modicum for shareholders, and with the collateral damage left for the public to manage.

The only way to ensure reasonable tax is paid by multinationals may be to place a levy on their turnover – similar to the royalties paid on minerals.

You’d collect less income tax than we currently do with those rates at those brackets.

I do agree with the idea of linking brackets to % of median income though.

You’d collect less income tax than we currently do with those rates at those brackets.

Yeah, that’s what I’d like to see some real numbers on. It’s less tax for about the bottom 80% or so of earners, but it’s more for the top 10% (and especially once you get into the top 1%).

Maybe the tax free threshold would need to be dropped down to 1/2 median.

I’d want to see it hand-in-hand with other reforms like a land and/or general wealth tax and maybe – as a last resort – a GST increase. Plus the usual elimination of negative gearing and superannuation’s flat tax replaced with a fixed discount.

On the expenditure side you’d want to see it accompanied by a reduction in the “middle class welfare” – family tax benefits, childcare subsidies, etc.

It’d primarily help out lower income earners at the expense of wealthy, though, so it’d never get off the ground with Liberals or Labor. The Greens are probably the only party that have a) the resources to evaluate feasibility and b) the philosophy to advocate it.

(To me the biggest benefit is getting rid of the perennial %(@^ing whinging about bracket creep, and its flipside laziness from the Government.)