From the Iraq War (Mark I) to another expensive lawsuit for Crikey, 2003 was a tough year. 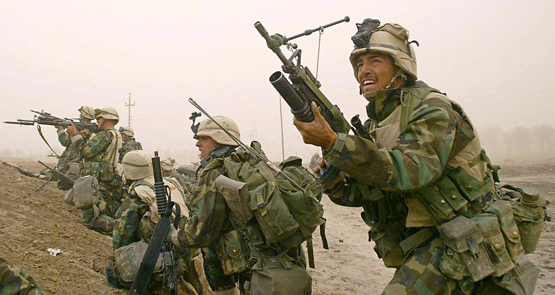 As part of our 15th birthday celebrations, Crikey is tracking 15 years of epic transformation in the media. Today we release the fourth entry in our Media Revolution timeline.

The Iraq War (Mark I) began in 2003, with George W. Bush kicking off the new year with an infamous (and deadly) 16-word lie in his State of the Union address: “The British government has learned that Saddam Hussein recently sought significant quantities of uranium from Africa.”

But then, as now, plenty of people were keen to become embroiled in another Middle East conflict. Said Sean “Home by Christmas” Hannity on Fox News: “We’re going to liberate this country in a few weeks and it’s going to be over very quickly. No, it’s going to be over very quickly.” Some 12 years later, with American and Australian troops returning to Iraq in an “advisory” capacity, that’s beginning to look a bit overly optimistic.

Google and Apple ramped up their online presence in 2003, with the introduction of AdSense (responsible for tailoring ads to you based on your browsing history) and iTunes (responsible for ensuring Apple gets its cut of every bit of media you consume) respectively. It was also the year that LinkedIn launched, proudly filling your inbox with professional networking requests from people you barely know.

And fledgling website Crikey found itself with yet another expensive defo payout, one it could ill-afford.