Mark Latham will have to defend his comments about mothers with depression in court. And other media tidbits of the day.

The case follows a failure to “resolve matters directly”, Pryor wrote on Twitter yesterday. In November, Pryor approached Australian Financial Review editor-in-chief Michael Stutchbury wanting a printed apology after a column she wrote for Fairfax’s Good Weekend magazine led to her being attacked by AFR columnist and former Labor leader Latham, but she was denied. “As a former opinion editor, I completely appreciate what a disgrace it is that something so malicious and defamatory could make it into any newspaper let alone a newspaper of the Financial Review‘s standing,” Pryor told Crikey sister site Women’s Agenda at the time.

Pryor is a lawyer, journalist and medical student with two small children. Her Good Weekend column focused on how she responded when people asked her how she managed to do all this. Her usual response: “caffeine and anti-depressants”. Her piece focused on the benefits of her open disclosure, and of getting help when necessary.

Five days later, in The Australian Financial Review, Latham wrote a piece entitled “Why left feminists don’t like kids”. In it, he criticised Pryor for her column, questioning why anyone would describe needing neurological assistance to raise children. “Women I speak to in western Sydney, who have no neuroses or ideological agenda to push, regard child-rearing as a joy,” Latham continued. “Financially, if they can avoid work, that’s their preference.” But “political feminists”, which Latham used to mean women like Pryor, didn’t like children and didn’t want to be with them, he claimed.

Pryor has said she won’t comment further on the case at this time. Fairfax and Latham were contacted for comment. — Myriam Robin

Video of the day. Last night’s episode of Q&A had a truly bizarre ending, with comedian Ruby Wax stroking Education Minister Christopher Pyne’s head as musician Michael Franti belted out a song about hugging people. Your tax dollars at work. 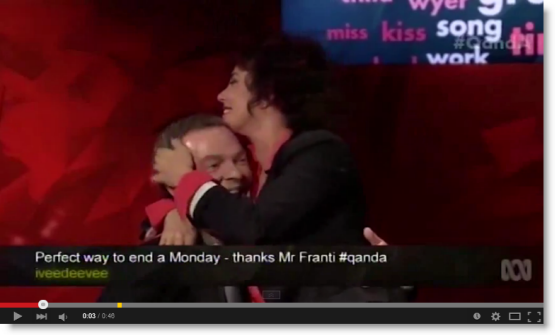 Front page of the day. The Advertiser in Adelaide has broken the first rule of fight club, big time. 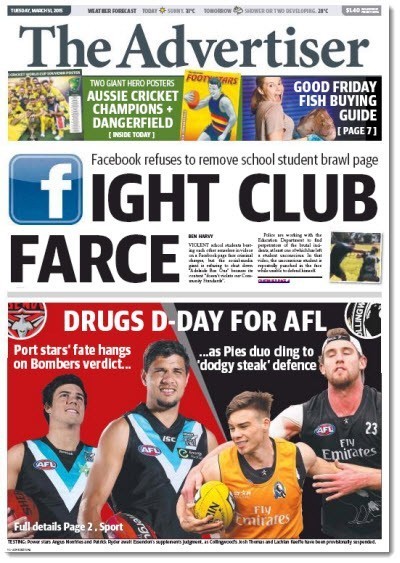 Do taxpayers really need to pay for the ABC any more?

I notice Ruby Wax paid particular attention to Pyne’s hair – no doubt admiring his ability not to moult.