‘I’ve been lied to’: Greens see red over party’s PDA for Sydney independent

The Greens campaign for the NSW state seat of Sydney has been left feeling high and dry over party bigwigs' public love for his independent rival. 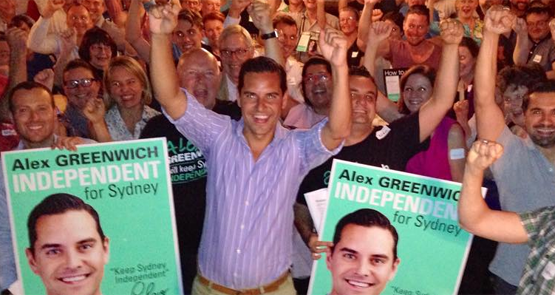 Members of the Greens in NSW are “furious” that high-profile members of the party supported independent Alex Greenwich in the seat of Sydney over the party’s own candidate. In private emails seen by Crikey, the Greens candidate for Sydney, Chris Brentin, said he was “disheartened” and “disillusioned” that fellow Greens candidates Jenny Leong and Jamie Parker had appeared with Greenwich at public events before the election.

Brentin received just 3324 votes on Saturday, dwarfed by the 15,468 votes Greenwich received. Greenwich was elected with 41% of first preferences and 58% after preferences were distributed. Greenwich’s platforms on LGBTI issues, public transport and the environment are very close to those of the Greens, meaning that Greenwich was directly competing for votes that likely would otherwise have gone to Brentin.

In the email, which was sent to Nicole Moore, a senior member of his campaign team, on March 12 and inadvertently shared with a wider campaign working group, Brentin said:

“I personally am going to find these last couple of weeks of the campaign really hard, trying trying [sic] to put our point across to the community, knowing that the party doesn’t really support.”

According to a source who spoke to Crikey, members of the Sydney campaign were “really bitter” that party bigwigs had forced them to renege on a preference deal with Labor candidate Edwina Lloyd in order to preference Greenwich. Jenny Leong, the newly elected Greens member for Newtown, also said publicly that she would work with Greenwich in Parliament, which didn’t sit well with Brentin’s campaign.

Brentin said in the email:

“The upcoming 2 candidate forums are going to be hard, I’ll have Labor (Eddie) on one side giving me death stares for reneging on a preference deal and Alex on the other side with a smug expression knowing he got what he wanted!”

Moore’s original email to Brentin said she was “pissed-off” with the way the campaign for Sydney was being run:

“I look at Jenny Leong and Jamie Parker’s websites when I come home from tonight’s meeting and discovered that they are nothing like ours and have plenty of traditional green instead of the coloured triangles. I’ve been lied to, and this isn’t even what I wanted to write to you about, yet it’s just another thing that’s leaving a very sour taste in my mouth lately.”

The Greens’ strategy in the election was similar to the one that brought them electoral success in Victoria last year, focusing funding on just a few key seats. Moore also said in her email that the Sydney campaign was being “stifled” because of concerns that it would affect the party’s chances in Newtown and Balmain:

“The greater party is going to once again throw all their resources into holding on to Balmain and Newtown, and once again they’re going to try to lean on us to conform instead of doing everything we can to give our candidate the best possible chance.”

Crikey understands that the Sydney campaign struggled to get volunteers because many Greens volunteers were being directed to Newtown.  The lack of resources was a big issue in the email Moore sent to Brentin:

“That really pisses me off and I’m sure it does you too, it makes me really wonder what the fuck I’m doing committing between 2 and 3 hours a day letterboxing, and feeling for others like Malcolm with the corflutes and all the door-knockers, when head-office is going to stifle anything we do that might be aimed at giving you an edge simply because it might, and I repeat ‘might’ upset candidates in other electorates.”

Jenny Leong received 46% of first preferences in Newtown with 17,431 votes.

Greens’ support for Greenwich in Sydney has led to tension at high levels of the party as well. One of Greenwich’s most high-profile supporters in the party is Senator Sarah Hanson-Young, who tweeted “Love you [sic] work” at him on Saturday night. She also tweeted earlier in the day “He’s doing a great job as Member for Sydney. He’s a fab MP with a big heart. #vote1Alex“.

Hanson-Young has been a long-time advocate of her friend Greenwich, which also caused ructions when he was elected at a byelection in 2012.

Why the hell would the Greens waste any time and resources going up against Alex? He’s a popular, established independent MP who’s on the same page as the Greens. Of course they would focus on other electorates.

and he hasn’t delivered anything for the community, nor can he.

Amusing to see Green supporters resorting to the “only Lib or Lab can form a government and deliver for their electorate” chestnut.

John, Edwina was the Labor candidate for Sydney, not a Greens supporter.

I agree, geejay. I couldn’t understand why the Greens ran against Alex. Quite frankly, Edwina, I was happy to have an independent to vote for. I don’t see what the two major parties have ever delivered for us in NSW besides corruption.