How much is the No Land Tax party paying its campaigners? Plus other whispers and murmerings.

NSW election wrap. The No Land Tax Party has labelled this weekend’s vote “disappointing” after gaining less than 2% of the upper house vote and about 2% of the lower house vote across the state, despite having the first position on a metre-long Legislative Council ballot paper. The party was offering $30 an hour plus bonuses for people to hand out how-to-votes, and a tipster who signed up shared these instructions with us: 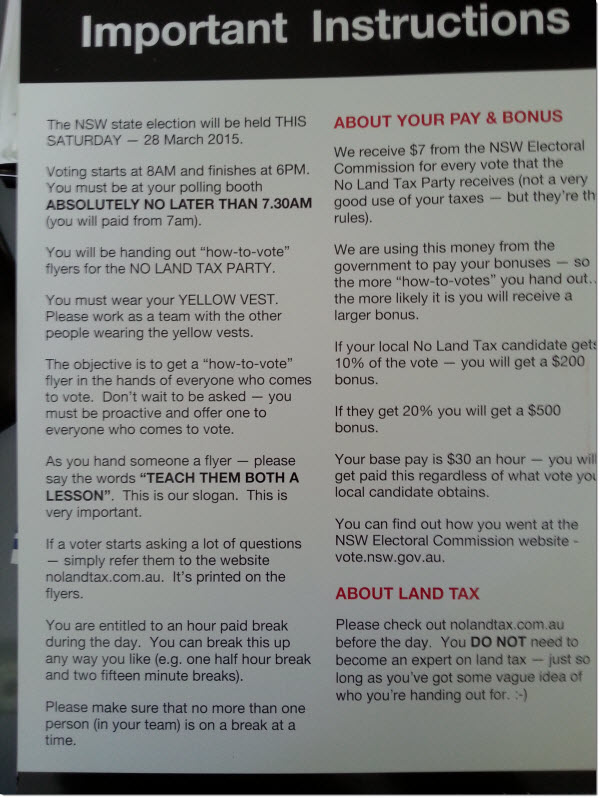 Staffers were told to read the party’s website to brush up on policies. The party’s flyers labelled both Labor and Liberal party members who have appeared at ICAC as “crooks” and both parties as “corrupt”, encouraging voters to “teach them both a lesson”. The tipster also received an email late last week saying that he would find out today if he was entitled to a bonus. From Crikey‘s early calculations, no one who handed out flyers for the NLT will be getting bonuses — the seat where the party got the most votes was Fairfield, where the candidate so far has 7% of the vote — far from the 10% required for a $200 bonus. The NLT won’t be getting any funding from the Australian Electoral Commission either, but NLT convener Peter Jones is maintaining the party will still be paying promoters $30 an hour for their work.

Premier Mike Baird took a leaf out of the Obama campaign book with this tweet, but it didn’t get quite the same impact as the original. 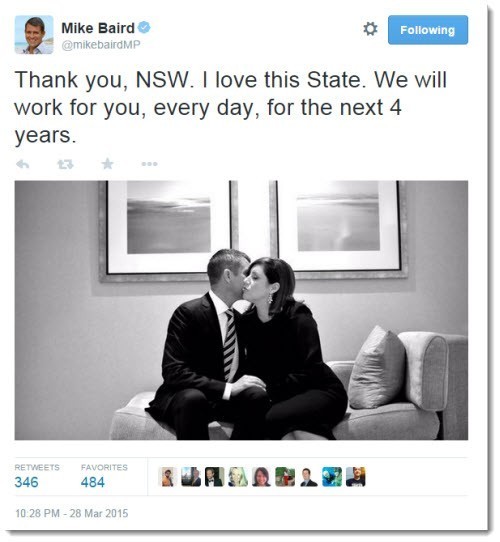 And spare a thought for The Daily Terror‘s Tim Blair, who has found himself living in the newly created seat of Newtown, where constituents overwhelmingly voted for the Greens’ Jenny Leong. In today’s column Blair threatens to become a “committed and involved constituent” to annoy Leong, a threat we are sure she’s taking seriously. But perhaps we are missing the main point here — Tim Blair lives in Newtown? We are pretty sure Newtown is full of frightbats … Has he been trolling us all along?

Let’s talk about punctuation. A Treasury white paper isn’t the sexiest announcement to start a week, and issues like bracket creep and GST don’t really capture the imagination of the average voter. We’re sure these are the issues that the boffins at Treasury thought about as they tried to brand the Tax Discussion Paper in a way that would make people sit up and pay attention. The choice to brand the paper “re:think” is something that the writers at Working Dog would be proud of, and the dual colours of the logo look like they took hours of graphic design work and focus groups. The problem is, of course, that “rethink” doesn’t have a colon in it, and it doesn’t need one.

Why did the chicken cross the road? Was The Sunshine Coast Daily feeling cocky yesterday when it asked its Facebook fans to caption this photo of a black rooster? Was it an attempt to get to the bottom of the ongoing chicken and road saga? Was it just a slow news day? We’re not sure, but it received more comments than a link to Premier Annastacia Palaszczuk’s sacking of MP Billy Gordon. The suggestions are as classy as you’d expect. 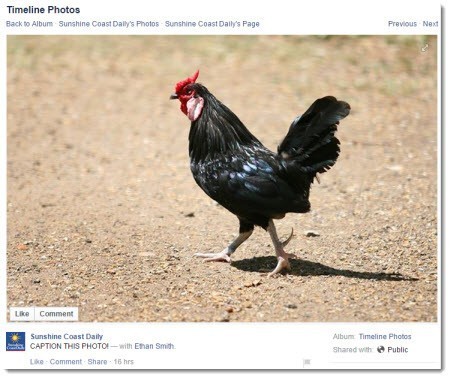 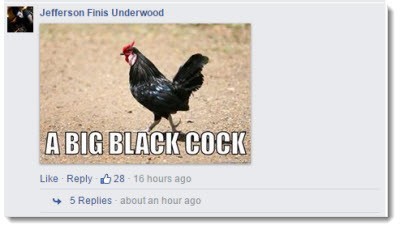 #Straya. Following last night’s resounding Cricket World Cup win by Australia, viewers were made to endure post-match interviews from the country’s weird drunk uncle, Shane Warne. Warnie didn’t seem to have paid much attention to what was actually happening on the field, asking the players no fewer than three times if they would be drinking to celebrate the win. It was uncomfortable to watch as Warne angled desperately for an invite to said celebrations and Twitter reacted accordingly. Of course Warnie hit back, against “do-gooders”, we hope he wasn’t too left out. 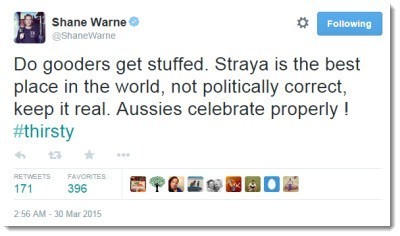 Actually, we didn’t HAVE to endure them – I turned the cricket off rather than watch that, it was a disgrace.

I have no interest in & less knowledge of cricket than a Peruvian mummy but a friend who cares sez that Ware was once a prince of the game – shame that he has fallen so low.