Just what is going on at The Guardian with sponsored content?

News Corp impersonates Anzacs. Ever wondered what Anzac soldiers and personnel would have written on their virtual walls if they had had Facebook? No? Well, they’re posthumously using social networking anyway, thanks to News Corp’s latest campaign, which “uses social media to bring [the] Anzac spirit to life”. Ten real and long-dead people have had Facebook pages set up for them for the project, which we’ll grant is certainly pioneering. A team of News Corp reporters have used the Anzacs’ diaries to post updates in the days leading up to the Gallipoli landing, giving us an insight into what it would be like if they were alive today and military protocol allowed troops to post live updates of their movements to Facebook.

As News Corp editorial director Campbell Reid put it in the release this morning: “AnzacLive is the culmination of 12 months of dedicated work that was prompted by the thought; what would it have been like to talk to them?”

A team of News Corp reporters will also use “their knowledge of the character’s diary entries and letters to interact with people in real time by entering posts or responding to questions that come via the page. If a question comes through that can’t be answered in the words of the character, there is an AnzacLive narrator who will fill in the gaps.” So far, this has resulted in exchanges like this one, where a reader asks General John Monash what the role of a “batman” is (not the superhero — batmen were servants to officers at the time), to have Monash respond: “He is my thoroughly devoted slave who would mother me if I would let him. My man Dawson is absolutely the clumsiest, unhandiest man I have ever met … He spoils every job he touches, is hard of hearing — never remembers anything, is untidy — although perfectly honest, he is a habitual fibber, or rather bluffer — in short he is almost everything a good batman ought not to be — yet I have not the heart to send him about his business.”

A list of “characters” whose diary entries and letters are used in the campaign include that of the aforementioned John Monash, army nurse Alice Ross-King and soldier Hector Brewer. This time a hundred years ago, most of them were kicking around Egypt — as revealed by, um, “their”, Facebook posts. Not included is Keith Murdoch — as a war correspondent Rupert’s father played a large role in revealing what happened at Gallipoli despite the best efforts of military censors. — Myriam Robin

Stranger than it looks. “Democracy Behind Bars” reads the headline on The Guardian. Oh that looks interesting — a rundown of 11 opposition leaders in jail or facing execution around the world. First on the list — Leopoldo Lopez, opposition leader in Venezuela. Well that’s a bit odd, because the Lopez case is complicated. The Maduro government is politically repressive, but there is good evidence that Lopez has urged supporters to burn down government buildings and wreck oil facilities — and it is for the crime of inciting arson that he is on remand. He’s not simply locked up as a political opponent.

But take a look at the side, and you’ll see that the entire article is sponsored by a private corporation, Crown Agents. What is Crown Agents? It’s a company that represents the Crown Agents Foundation, a network of NGOs, UK government departments and peak bodies. These include the Commonwealth Business Council, First Caribbean International Bank, International Business Leaders Forum, International Chamber of Commerce, and the British Department for International Development.

These are private groups with private interests and UK government bodies with national interest agendas. Murky as hell. But not too murky for The Guardian to allow Crown Agents to sponsor individual articles.

That is simply a failure of journalistic ethics and a corruption of content (even though, according to The Guardian‘s terminology, Crown Agents had no influence in crafting the article). That will stun many Guardian readers, who look to the site for uncompromising international reporting. Weeks after the UK Telegraph lost much of its reputation for allowing the interests of major advertiser HSBC to affect content, how is it possible for The Guardian to run an article sponsored in part by the Royal Caribbean International Bank, which leads off an article about political repression with a questionable case from Venezuela — while clearer examples of it are shuffled further down the piece?

Just how bad are The Guardian’s ongoing finances that it would take such risks with its reputation? Or is it simply a measure of arrogance that they assume the reader’s uncritical trust? Either way, a major fail. Comment is free, facts are sacred and a paper lives or dies on not betraying the trust of its readership. — Guy Rundle

Read it and weep. Who says it’s hard to make a buck in online media? Collingwood CEO Gary Pert told The Australian Financial Review’s John Stensholt that his club made $1 million annually from sponsorship and product placement in its digital video business, allowing it to break even on the costs of running the venture, which employs eight full-time digital staff. These staff, who aren’t referred to in the Fin’s report as journalists, made four feature-length documentaries on the team during the 2014 season — Pert is hopeful of them being shown on TV networks.

Pert adds that Collingwood has discontinued its weekly Foxtel show, The Club, deciding it could reach more fans through its own channels. Of course, this is all on top of the AFL’s own extensive media operation, which launched in 2012 and employs more football journalists than the Herald Sun. Not that it wanted to necessarily consider them journalists in all situations — in December the AFL lost a Fair Work Commission case in which it argued their working hours should be subject to the “sporting cycle rather than the media cycle”. AFL journalists are now able to proceed with bargaining for a collective agreement through the Media, Arts and Entertainment Alliance. — Myriam Robin

Front page of the day. Clarke goes out with a bang … 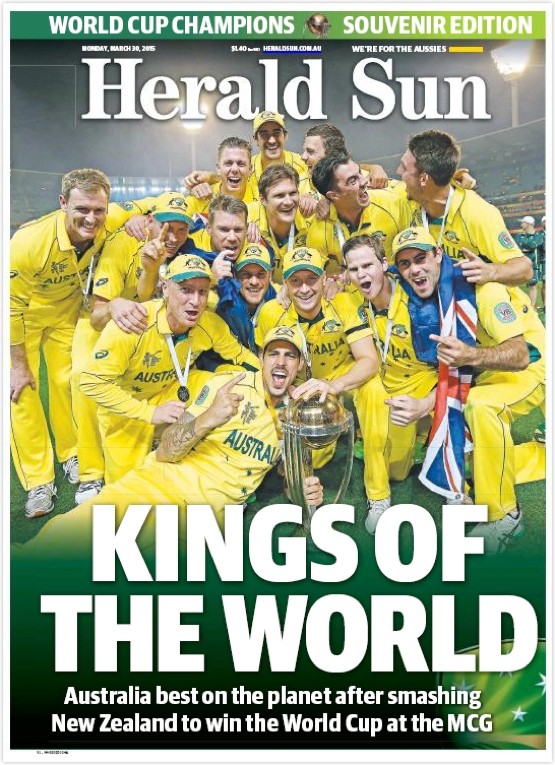 Assange keyholed … Kernot on the BBC …

So Keith Murdoch was an early version Snowden, Assange or Manning?
No wonder Rupert’s on the side of (self)censorship – when such leaks might embarrass his Limited News Party ….?

The Anzac Facebook farce is not unlike the manner in which Australian History is being trashed in our schools and universities. We’re spending far more per capita on students than in the past when History was taken seriously, not treated as a sideshow / vaudeville event, but the money is going not so much into teaching as into creating comfortable expanding sinecures for senior ‘academic’ staff.
I understand we call it progress?