It’s back to the future with the jubilant Greens

Travelling from the Libs' election party to the Greens' shindig took only 10 minutes, but they were worlds apart. 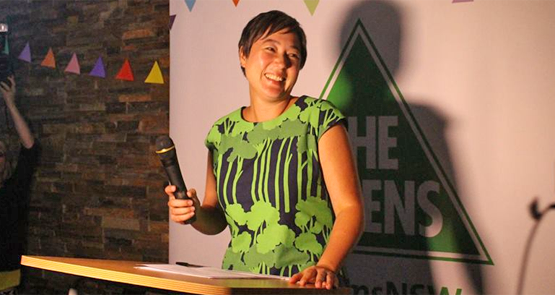 Leaving the Liberal Party HQ election party on Saturday night for the Greens’ gathering felt like a lot like time travelling. From the genteel surrounds of the Sofitel Wentworth Hotel, where a lot of white, middle-class people were celebrating the return of the Baird government, it was only 10 minutes’ drive to Sydney University’s Grandstand Bar. But inside the bar, the average party goer dropped 20 years and about two tax brackets. A diverse, multicultural sea of sweaty, enthusiastic Greens supporters were sinking beers and celebrating the news that they were about to make history. I felt as if I had travelled from the past to the future, bypassing the present.

It reminded me of the remarks made by former Obama strategist David Plouffe about the United States. Demography, he said, would ensure that the Democrats would eventually become the natural party of government. As the proportion of Hispanic and African-American votes increased, the Democratic vote would follow suit, he said. It’s difficult not to wonder if the more progressive parties here, with a higher proportion of young, educated members from diverse backgrounds, are heading in the same direction.

Jamie Parker, the lower house’s sole Greens’ MP in the last NSW Parliament, confounded the critics by winning the seat of Balmain for the second time on a two-party preferred swing of 4.4%. Having two or three new allies in the chamber would make a huge difference, he said. Previously, he has sat with and tended to vote with the two lower house independents, Sydney’s Alex Greenwich and Lake Macquarie’s Greg Piper. The new Greens would be a psychological and practical boost, he said, giving them all increased bargaining power.

For example, parties get access to the Parliamentary Counsel, who drafts proposed legislation, based on their respective clout, Parker said. The first piece of legislation he would be seeking to have drafted would be one requiring those people found to be guilty of corrupt conduct by the NSW Independent Commission Against Corruption to face criminal action. It’s hard to see either of the major parties really wanting to pass this one — aren’t our jails full already? — but they can hardly publicly oppose it.

Another issue that looks set to get a sustained airing is the WestConnex roadway and tunnel, which is about as popular in the inner city as Hep C. The Greens have always opposed it, the Libs want it and the Labor Party keeps changing its position. But given that most of the tunnels built in Sydney in the past 20 years have gone broke, and we have already passed the crucial milestones of peak car ownership and peak car trips, I’m not really worrying about it. The potential financiers of this project will work out it’s a dud years before the politicians, and like all the new coal projects in Queensland, they will vote with their wallets.

Parker said that people had told him on the day that although they normally voted Labor/Liberal, they were voting Greens this time. This and the fact that he had won booths like Birchgrove Primary School (previously a Liberal stronghold) and the Glebe Town Hall (Labor) showed that people were no longer voting along party lines, but were looking at the issues. “They’re voting tactically,” he said.

This being an election night, conspiracy theories were rife. One particularly good one concerned the very low-carbon Australian Cyclists Party, which was advised by preference whisperer Glenn Druery.  This theory held that by failing to direct preferences to the Greens, the ACP was in fact assisting the ALP. According to the ACP website, the party declined to direct preferences in six of the lower-house electorates it  ran in, including Balmain and Newtown, where it won 2% and 1.8% of the vote respectively. Under optional preferential voting, when their votes “exhausted”, they were simply discarded. If they had directed prefs to the Greens, probably their natural ally, it would have assisted the Greens — but by not directing prefs they were hurting them by “wasting” a progressive vote. In tight races, the ACP votes could make a difference. If the micro-parties are in fact indulging in these perfectly legal electoral tactics in order to play off the major parties against each other, then clearly they have a bright future.

A highlight of this election campaign was finally being able to distinguish between bullshit and nonsense. A handy guide to this is contained within John Lanchester’s excellent book, How to Speak Money: “Every time somebody tries to sell somebody something, a degree of bullshit is usually involved,” he writes. “Bullshit is all around us; the term implies exaggeration, rhetoric and a mild kind of untoxic falsity. It implies that something is false but not malign.” Nonsense is different — it “consists of things which are actively false”. In this context, bullshit was almost everything to do with privatisation and nonsense was implying that the Chinese could buy it all up and turn off the lights. Once you’ve grasped this, it makes elections much more bearable.

But the most important part of election nights, of course, is getting the right pharmacological balance. Drinking too little is unthinkable, while an excess of the red infuriator can lead to revelations that you secretly fancy Duncan Gay. With this in mind, I pre-loaded with decent wine at home, shunned the Libs’ paint-stripper shiraz and then topped up with a vodka shot at 10pm. By the time the youngsters had hit the dance floor at the Grandstand Bar, bopping along with Shake Your Tail Feather, peak serotonin had been achieved. #Fourmoreyears.

Perhaps more of the electorate is slowly becoming bullshit intolerant?

Margot, I worked as a Greens supporter at our local polling booth from 5.30am (set up) until 2 and then returned at 6pm for packup. I was too tired to have more than a martini before bedtime and only ate food and drank water at the Greens after party.

I couldn’t be bothered with the idiotic TV coverage of the election and just accessed the online tally room.

One day, one day, the people of Australia may realise that there’s more choice out there than just the Labor/Liberal monster party, but you won’t hear about it from the mainstream media. Is that because parties such as the Greens don’t have the income (from mining giants etc) to do TV, Radio advertising?

Funny how repeating a word used in this piece lands you in moderation?

I’m surprised no one seems to have mentioned how wrong the polls were in Newtown.According to Reachtel Labor was going to walk it in, and the Greens lose. This is presumably because they were using landlines and the under 35s, often renting, don’t do landlines.