Harsh reality for networks as viewers turn off

Reality TV is cheap, but viewers are getting bored with it. 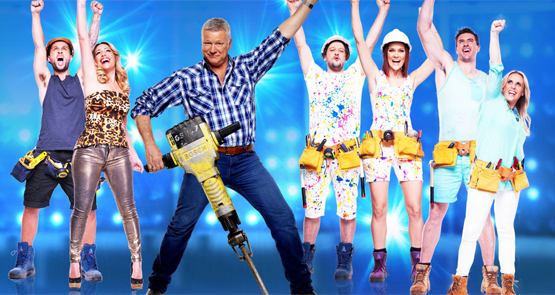 Then unremitting diet of big-budget “reality” programs might be good for the economics of our three cash-strapped, revenue-challenged main TV networks, but it is not impressing viewers, who have deserted free-to-air TV prime-time viewing at a rate of one in 10 since the official ratings race started in February.

And there is likely more bad news ahead for the free-to-air networks, which have doubled down on reality shows for the year, with the coming of streaming services like Netflix.

According to analysis of Oztam ratings data for the ratings year so far by Fusion Strategy in Sydney, peak live main channel audiences are down 11.51% so far in 2015. And Fusion’s Steve Allen blames the three networks, which he says are “hammering away at each other with reality … [and that] will diminish audiences further”.

And he will be proven right when Seven’s House Rules starts after Easter, and Nine starts its knock-off, Reno Rumble. It’s an expensive spoiler from Nine, which shows that the network has run out of ideas for new programs.

Oztam data shows that while both Seven and Nine have lost ground for their current headline reality shows (My Kitchen Rules and The Block), Ten’s audience is up dramatically — but that is more to do with the fact that a year ago Ten started the year with its weakest audience figures in a decade or more. So far this season, MKR has lost 12.6% of its audience this year compared to 2014, with a 14.4% drop in the 16-to-54 demographics. The Block‘s audience has fallen 33% compared to 2014 and more than 38% in 16-to-54 viewers.

In a note to clients on Friday, Allen wrote:

“A large proportion, but not all the viewers, are happy with Reality TV …  we estimate it is about 65%. The rest do not like or enjoy this genre … [It’s] pretty clearly a reasonable number of viewers are tiring of Reality …  yet this is the pattern the Networks have chosen and committed to for pretty much the whole year. Thus we think the outlook for audiences … just as SVOD [subscription video on demand] launches, as another competitive attack … is a little bleak and problematic.”

Over the past couple of years the networks have used reality shows to cut programming costs in a very simple way — by extending the nightly episodes from an hour or 75 minutes to 90 minutes. That means audiences are held longer to a winning format (in Nine’s case though it has amplified the fall in viewer numbers of The Block), enabling the networks to reap more revenue from charging high ad rates for the extra half hour — more than they could for a new program. That in turn allows the network to cut half an hour of programming costs four or five nights a week, or one sitcom or two hour-long dramas — and save upwards of $300,000 to $1 million in production and scheduling costs. The cost of the extra half hour for the reality program is marginal — the vision would have been shot anyway (the shooting ratio for these programs is quite high).

The danger for the networks is that as the year goes on viewers will stop watching the new programs because they are bored, or have seen them before. And as we saw with Australia’s Got Talent on Seven a couple of years ago, and then on Nine, and Big Brother on Ten and Nine, once viewers get bored with a format, they stay away, costing the network huge amounts of wasted production costs and lost ad revenues.

The driver for this approach is the absence of any growth in TV ad revenues in the past five years — in 2014 ad revenue for the three networks was less than it was in 2009, despite the rise in costs for big-ticket productions and the huge new broadcasting contracts for the AFL (Seven and Foxtel) and the NRL (Nine and Foxtel). Nine and Seven are now gearing up for the new AFL contract, so they will need to save every dollar of costs they can. Ten will talk the talk on how it wants a part of a new broadcasting contract, but unless the tooth fairy appears to drop a couple of hundred million dollars down its balance sheet, it won’t be a player. It has to convince TV advertisers and viewers it will return in 2016.

The year the under-40s said ‘you’re fired!’ to reality TV

Isn’t this fabulous? The commercials show crap year in, year out and finally, viewers are walking away. You reap what you sow – no sympathy whatsoever.

It’s all so unreal.

Netflix? Not much good to us here in the Hunter with a 1.2MB/s max connection speed. We would have had the NBN here in 2015 if Labor got back in but since the coalition gained power there’s no sign of any faster connection on the horizon. I suppose this was the plan of Murdoch all along… destroy the NBN so viewers will buy expensive pay TV subscriptions. Thanks Abbott, thanks Murdoch. I’ll do without TV and I’ll do without Netflix. I’ve plenty to occupy my time without lightening my wallet.

Reality TV? Can’t stand it.. It’s stupid and it’s manipulative and is so obviously a vehicle for advertisers. Viewers will thankfully dump all of the rubbish soon. There’s nothing to watch on TV except for Micallef’s Mad as Hell, the odd good movie on SBS2 or Shaun the Sheep.

Reality shows and endless repeats… no wonder they’re losing revenue. Abbott’s gutting of the ABC is probably done so that the ABC can be brought down to the garbage level of the commercial networks.

Let’s face it – if every commercial television station closed down tomorrow, then other than if we are shareholders or employees of these networks, what would we really lose?

In fact, I’m inclined to think our lives would be significantly improved.

Not for nothing are Australian workers one of the least educated groups in this country. With numeracy and illiteracy rates at around thirty percent of the workforce, aided by TV programs suitable for ten year old children, all add up to a gloomy future for this country.