A thorough drubbing or a remarkable swing for NSW Labor? Depends who you ask

Mike Baird has held onto power, but the real winners might actually be the Greens. 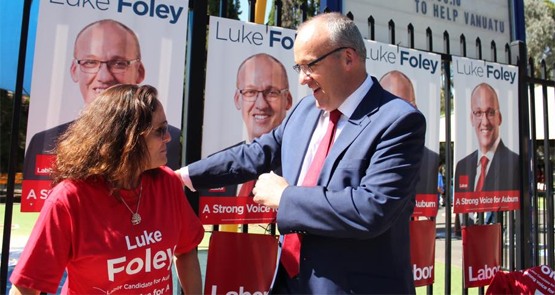 Voters in New South Wales handed Labor one of the biggest drubbings in the state party’s history on Saturday, awarding the ALP barely a third of the primary vote along with its second-lowest seat total since the Great Depression.

That, at least, is the glass-half-empty view of Labor’s performance. Those with skin in the game would naturally prefer that we focus our attention on alternative metrics, such as the biggest swing in Labor’s favour at a New South Wales election since 1941.

The Opposition Leader, Luke Foley, claimed yesterday that the party had “gone from a rump in the old parliament to a real opposition”, while the party’s state secretary, Jamie Clements, declared mission accomplished on its “goal of winning between 10 and 15 seats and retaking our heartland”.

But any self-congratulation that might emanate from Labor cannot fail to strike a false note, since the reckoning the party faces is with consecutive unprecedented defeats and an ongoing image problem that continues to threaten its competitiveness at federal level.

The Labor recovery, such as it was, was markedly concentrated in the Central Coast and Newcastle, which have accounted for about half the seats gained since the 2011 result.

No fewer than six and perhaps as many as eight of this region’s 11 seats look like they will go from the blue column to the red, potentially returning to Labor all the seats lost in 2011 with the additional bonus of Port Stephens, held by the Liberals since 2007 but now in Labor hands after a swing of over 20%.

Since it was in this region that the Liberals were disemboweled by the Independent Commission Against Corruption’s inquiries into property donations, it can be inferred that a sizeable part of Labor’s recovery had more to do with specific failings of its opponents than a renewal of confidence on the part of voters.

Further north beyond the Liberals’ ICAC kill zone, voters sought alternative avenues to express their displeasure with the government. In doing so they delivered another breakthrough for the Greens to add to that achieved at the Victorian election in November, when the party’s surprise success in Prahran gave it its first ever win in a Liberal-held seat.

This time it was the Nationals who bore the brunt of the Greens’ evidently expanding horizons, with a clear win in Ballina extending their lower house domains beyond the inner-city for the first time. It appeared for most of Saturday night that it would be joined by a further gain in neighbouring Lismore, although counting of postal votes yesterday has thrown that into doubt.

Labor would be enormously demoralised at its own failure to yield the dividend from the local backlash against coal seam gas exploration, given the enormous amount of campaigning effort they put into the area. It could well be wondering if some of that energy might have been better spent on Sydney seats which it had perhaps been assumed would return to the fold on the back of a natural correction.

As it stands, Labor recorded another dismal result in Sydney, leaving the Liberals with 13 metropolitan seats that were in Labor hands prior to 2011, by margins as great as 18.5% in Camden and 19.8% in Drummoyne.

Jamie Clements boasted that Labor had “picked up every seat we targeted in western Sydney”, and it’s true enough that the swing here yielded six seats, three of them (Blue Mountains, Campbelltown and Londonderry) on the back of double-digit swings.

However, the emphasis on western Sydney in particular feels like an attempt to use the obsession political observers have with that part of the world to gloss over failures in the inner-city and southern suburbs.

Balmain and Newtown were won handily by the Greens, who look to have far outperformed any past state election result, in New South Wales or anywhere else, in bagging as many as four lower house seats — although their statewide vote was, in fact, unchanged on 2011.

The size of the Greens margin in Newtown especially raises questions about Labor’s capacity to ever win these seats back, notwithstanding that they may have suffered short-term damage from the federal opposition’s acquiescence in the government’s data retention regime, an issue that had been playing very badly among the green-Left inner-city constituency in the weeks before the poll. Whatever the reason, Labor’s failures in these seats have cost them ready-made front bench candidates in Verity Firth and Penny Sharpe.

Even worse for Labor was its failure to unseat Liberals in the neighbouring southern Sydney seats of East Hills, where Lionel Murphy’s son Cameron Murphy looks likely to fail despite taking on a Liberal margin of all of 0.1%, and Oatley, where the Liberals’ astoundingly managed to add a further 3% to their margin from 2011.

Nor would Labor have been anticipating that its star recruit, Jodi McKay, would face such a struggle in her inner-west seat of Strathfield, where she appears likely to make it home with a margin of less than 2%.

In spite of everything, Labor’s aggregate seat gains may be enough for the party hierarchy to persuade itself that the ship is back on the course — although they will equally have been limited enough to have Tony Abbott feeling that little bit more secure than he was a few weeks ago.

Ultimately though, the one principal with real cause for satisfaction is Premier Mike Baird, who has stopped a Liberal rot that cost it power in two other states over the preceding months, and in doing so confirmed his status as the most popular political leader in the country.

Clearly in my discussions with rank and file ALP members I must have encountered an unrepresentative sample, because although many are pleased about individual seats, not one has felt better than relieved it wasn’t worse.
I accept that some of the ALP Elites have a more ‘positive’ interpretation.

“it can be inferred that a sizeable part of Labor’s recovery had more to do with specific failings of its opponents than a renewal of confidence on the part of voters.”

As opposed to the outcome in most switches of power in a two-party dominated system? For instance when the Libs took those seats from Labor last state election?

I wonder why Mike Baird is tripping over himself in his rush to sell off poles and cables? Is that horse “self interest” in there somewhere.
pic.twitter.com/1GrSKPhZqQ

Didn’t see the verb “drubbing” when the Labor Party won government in Victoria. Oh I forgot, Labour is not LNP for our mostly pro LNP churnalists.

“Drubbing” is a noun.