Libs hang on in NSW, but do they have a poles-and-wires mandate?

NSW Premier Mike Baird put his cards on the table and it paid off at Saturday's state election -- but does the Coalition now have a mandate to privatise the state's poles and wires? 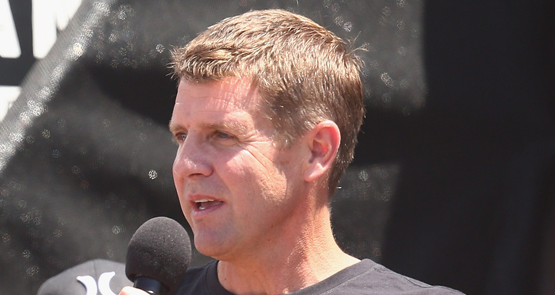 When Mike Baird became the unexpected premier of NSW in April last year at the age of 46, the question everyone asked was: “Where’s the beef on Bambi Baird?”

Any remaining doubts were brushed aside when Baird won a convincing election victory on Saturday after weathering a negative 9% swing and a late Labor anti-privatisation offensive, which he described as the “the biggest scare campaign in state history”.

But voters had “chosen hope over fear”, he said, and he promised to fight to retain power at the next state election in 2019 by delivering on his election promises.

While Baird was claiming victory, so was Labor’s Luke Foley. At the Lidcombe Catholic Club, Foley turned his concession speech into a Labor revival, saying: “We’ve gone from a rump in the state Parliament to a real opposition. The next election is now winnable for Labor.”

He gave the upbeat prediction as Labor’s representation in the lower house rose from 20 to 33 with some results still to be finalised. While a win of 13 seats will be relief to Foley supporters, it is well below the 20 predicted by some Labor elders. Labor’s “revival” in Western Sydney was not realised and the results in the Hunter were predictable rather than spectacular.

Meanwhile, over at Sydney University, the Greens were claiming victory too after a stunning campaign which delivered them three and maybe four seats.

Jenny Leong won the new constituency of Newtown, Jamie Parker reclaimed Balmain by defeating Labor’s Verity Firth for the second time, and two outsiders were poised to win Ballina and Lismore from the Nationals on the far north coast.

With five and maybe six MPs in the upper house and a notional four in the lower house, the Greens have emerged as serious parliamentary players who threaten not only Labor (from the Left) but also the Nationals in environmentally sensitive seats.

The gains were achieved despite a virtual media black-out and a frugal campaign on limited funds. Baird’s CBD friends in the mining companies and finance houses will be holding crisis meetings this week to plan a new strategy to exploit the state’s coal seam gas (CSG) resources.

In his exuberant victory speech Baird produced the mantra electors will be hearing hundreds, if not thousands, of times in the coming weeks: “We sought a mandate to make NSW great — and tonight, the people of NSW have given us that mandate.”

Opposition Leader Luke Foley is determined to frustrate Baird’s mandate by voting against his power privatisation bill, and so are the Greens and the two MPs from the Shooters and Fishers Party.

Foley said on the eve of the election: “We will vote for the settled [anti-privatisation] policy of the Labor Party. That will be our policy in the next Parliament, win, lose or draw.”

However, in his concession speech at the Lidcombe Catholic Club, Foley made no mention of the “poles and wires” legislation that is now a Coalition priority.

The question being debated by the major parties and the media is: are defeated political parties obliged to fall into line when opposing parties gain a vote to govern?

The Coalition parties say “yes”, Labor, the Greens and the Shooters and Fishers say “no”. Fred Nile’s Christian Democratic Party is potentially in favour of power privatisation, and its support will be made easier if Nile becomes the next president of the upper house on a $273,660-a-year salary. Given the election was virtually a referendum on the Coalition’s power lease-off, Foley and the other refuseniks have little wriggle room in voting down the legislation without facing some kind of voter backlash.

Another significant change in the next Parliament is the gender balance. A record number of 23 women MPs will take 25% of the seats in the Legislative Assembly:

Finally, there is Prime Minister Tony Abbott and the federal implications for Opposition Leader Bill Shorten.

Baird demonstrated how Liberal leaders should campaign and behave. It is beyond the swaggering Abbott to produce such generosity, and the spectre of the sophisticated Malcolm Turnbull will continue to haunt Abbott’s deathly prime ministership.

Abbott is so consumed by vanity he will regard Baird’s win as his and dig in for the long haul until the 2016 federal election.

Shorten seems impervious to repeated demands for major policy to show the character of any government he might lead. In that sense, he is the very opposite of Baird, who put his cards on the table at the outset and then campaigned exuberantly.

As far as NSW voters are concerned, what happens in Canberra stays in Canberra. They’re pretty much sick of it.

I don’t get how you had a job as a political correspondent. This is bilge.

I wonder if we will guarantee the residents in that electorate that the power bills wont go up because of privatization yeah right.

You missed Jenny Aitchison for the seat of Maitland.

Now guess which party is dragging the ratio down?

Perhaps the same party whose counterpart in Victoria has just found that:
[Victoria’s Liberal Party is looking for more women members, but a review has found female MPs are being bullied, threatened and intimidated.]

Here is the comment again, hopefully minus moderation by omitting the link to SBS, and too late and lazy to include Jenny Aitchison.

“chosen hope over fear”. Political speak and tripe at that. The next four years will see government fees and power charges continue their upward spiral and services will be reduced.

There will be no excuses offered as the political class continues to transfer public money to the big end of town.